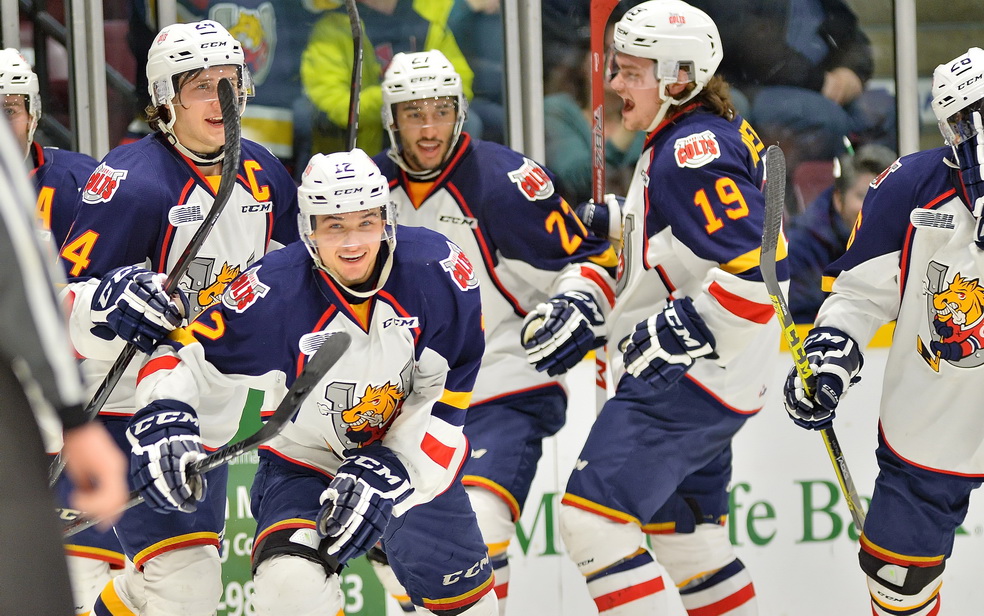 The Colts look to build momentum following their Saturday night win over the Oshawa Generals with the trio of games in three nights. The first will take place Thursday night when the team makes their way to the WFCU Centre to clash with the Windsor Spitfires. The following night, the team will be in Sarnia to take on the West Division leading Sarnia Sting before returning home Saturday night to host the Mississauga Steelheads in a Central Division showdown.

Following their win last weekend against the Generals, the Colts officially clinched a playoff spot joining Kingston as the other Eastern Conference to assure a spot in the postseason. The Colts sit second in the Eastern Conference trailing the Frontenacs by 6 points for the all-important top seed. The Colts lead the Central Division with 72 points but have had their margin trimmed from 8 points to 4 over the past week. The North Bay Battalion have won their last 4 games as they now sit second in the division with 68 points.

Kevin Labanc continues to lead the league in points as he now has 106 for the year, which is 5 more than London’s Christian Dvorak who is currently second with 101 points. Labanc’s 34 goals in good for a three way tie for 8th with Dylan Sadowy and Kitchener’s Ryan MacInnis. Andrew Mangiapane continues his torrent pace as he is now tied for second in the OHL in goals with Erie’s Alex DeBrincat and North Bay’s Mike Amadio and sit behind Christian Dvorak who’s in first with 44. Rasmus Andersson continues his sturdy year as the native of Sweden has posted 7 goals and 42 assists. His 49 points are second amongst defencemen as he is four points back of North Bay’s Cam Dineen.

The Colts will face off against the Windsor Spitfires in what should be a very competitive match-up. The game will mark the second of two meetings between the teams, with Barrie taking the first game 3-1 on January 9th. Roy Radke’s second period goal would prove to be the winner while Rasmus Andersson contributed with two assists of his own in the victory. Mackenzie Blackwood was a rock in net for the Colts’ stopping 32 of 33 Spitfire shots to pick up the win.

Through 57 games, the Spitfires have a record of 33-18-6-0 and sit one point back of Sarnia of the top spot in the West Division. Their 72 points are good for 5th in the Western Conference where they have officially clinched a playoff berth. The Spitfires’ power play ranks 4th in the OHL, converting on 22.9% of their opportunities while their penalty ranks tied for 12th working at an 80.7% success rate.

After a 2014-15 season that saw Windsor finish the season with the league’s second worst record, the team is enjoying a nice comeback season. A large part of their turnaround comes from the play of Christian Fischer. The native of Wayne, Illinois has recorded 29 goals and 43 assists in 55 games. His 72 points are good 12th place tie in league scoring with Kitchener’s Adam Mascherin. Logan Brown has also been a big part of Windsor’s success, posting 12 goals and 43 assists in 48 games. Brown was ranked an “A” level prospect by the NHL Central Scouting which means he is projected as a potential first round pick in the upcoming 2016 NHL Draft. The Colts’ will also be a familiar face when they play the Spitfires, squaring off against former Colt Brendan Lemieux. Lemieux was traded to the Spitfires on December 10th. Since being acquiring by Windsor, Lemieux has notched 21 goals and 17 assists in 26 games. Windsor’s most productive rookie has also been their most productive defenceman as Mikhail Sergachev has been superb for the Spitfires. In 56 games, Sergachev leads all defencemen in goals with 14 and is third in scoring among blueliners.

Following Thursday night’s game in Windsor, the Colts will remain in the West Division where they visit the Sarnia Sting. The only meeting between the two teams was Barrie’s home opener back on October 1st where they were shutout by the Sting 1-0. Sasha Chmelevski scored the lone goal while Justin Fazio stopped all 26 shots for the win.

Through 57 games, the Sting have a record 33-17-5-2 where they are currently first in the West Division and second in the Western Conference, sitting a distant 16 back of the first place Erie Otters. Sarnia’s power play has made good on 18.9% of their opportunities ranking 11th in the league while their penalty kill has done much better ranking 3rd in the league, successful killing off 83.3% of its chances.

Travis Konency has been Sarnia’s best player since being acquired by the Sting at the trade deadline. In 22 games, the Flyers’ prospect has registered 16 goals and 23 assists and his 84 points are good for 7th in league scoring. Another major component for the Sting has been the play of Pavel Zacha. Zacha, who was the 6th overall pick in the 2015 Draft by the New Jersey Devils, has being a leader on the Sting, has posted 23 goals and 28 assists in 51 games. Sarnia’s most productive defenceman has been Jakob Chychrun. The first pick is the 2014 OHL Priority Selection has 9 goals and 30 assists in 54 games and his 39 points ranks in scoring among defencemen. Ryan McGregor has been the Sting’s top rookie, posting 9 goals and 13 assists in 48 games.

Saturday night will mark the sixth and final meeting between the Colts and Steelheads this season. Barrie has taken four out of five from the Trout, including their last game on February 6th where the Colts downed Mississauga 6-3. Andrew Mangiapane recorded a hat trick in the contest while Julius Nattinen and Kevin Labanc each tallied three assists.

Through 59 games, the Steelheads are 30-25-1-3 and sit third in the Central Division with 64 points. The Steelheads are currently 4th in the Eastern Conference as they battling North Bay, Niagara and Peterborough for home ice advantage in the first round of the playoffs. The Steelheads’ power play and penalty kill both rank 8th in the OHL with the man advantage operating at a 20% success rate while the penalty has successful killed off 82.2% of its chances.

Leading the way for Mississauga continues to be the trio of Alexander Nylander, Michael McLeod and Nathan Bastian. The NHL Central Scouting ranks all members of the Steelheads’ top line “A” level prospects. While Nylander and McLeod have been projected to go early in the first round of the 2016 NHL Draft, many draft boards have Bastian slipping to the back end of the first round. Nylander leads the team in points with 70 points, which includes 28 goals and 42 assists. His 70 points lead all rookies in scoring as he sits 16 points ahead of North Bay’s Cam Dineen. McLeod has also been a big part of the Steelheads’ offence as the Mississauga native has recorded 19 goals and 37 assists in 50 games. Nathan Bastian has been equally impressive as he has similar numbers to McLeod, posting 19 goals and 36 assists in 55 games. Nicolas Hague has been one of Mississauga’s best defenceman as the rookie has 10 goals and 10 assists in 57 games. His 10 goals ranks 3rd amongst rookie defencemen, trailing only Dineen and Sergachev in that category.3