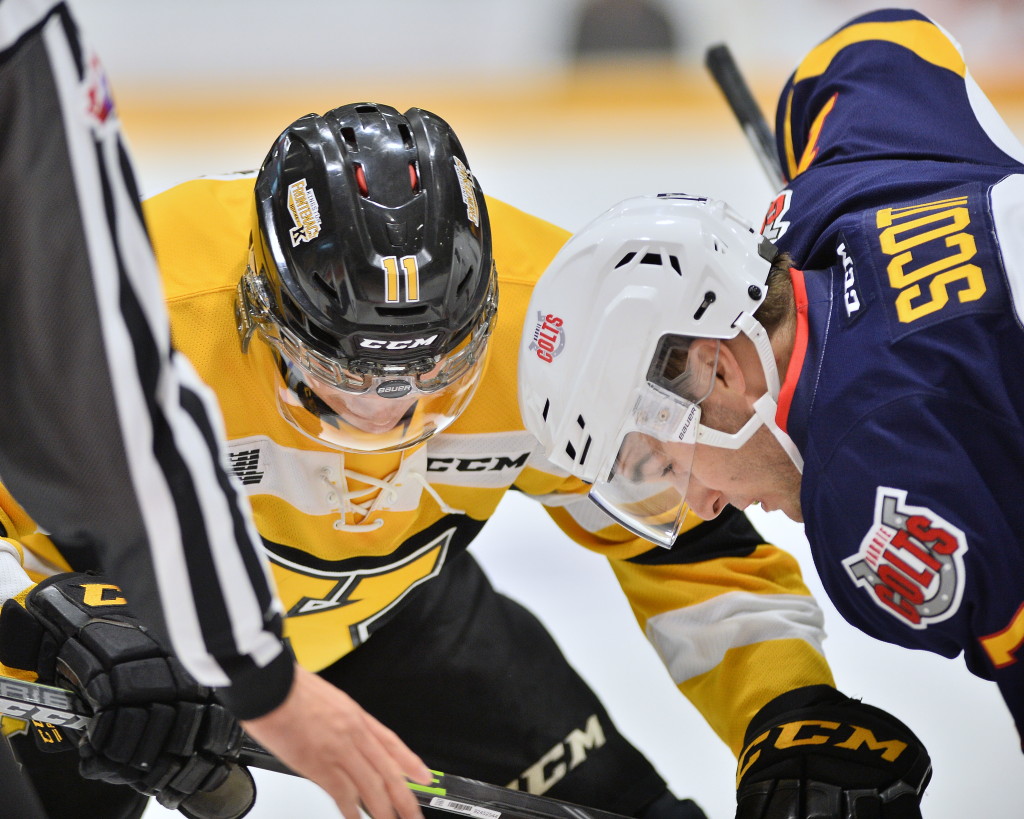 The Colts come into this week having won their last 6 games, including a win Wednesday night against the Owen Sound Attack. The team’s last loss came on January 23rd where they fell 6-5 to the Kingston Frontenacs. Since then, the Colts have a pair of wins against the Oshawa Generals and the Mississauga Steelheads with a win against the Niagara Ice Dogs sandwiched in between. In Wednesday night’s win, Kevin Labanc was a standout as he recorded two shorthanded goals along with an even strength goal to notch a hat trick, and add an assist, while Andrew Mangiapane also had a big night with 3 assists. Mackenzie Blackwood recorded his third shutout of the season in the win, stopping all 42 shots.

Barrie now has three players ranked in the OHL’s top 10 scorers with Labanc leading the way with 94 points. His four-point night in Owen Sound propelled him past London’s Christian Dvorak. Mangiapane holds down the 9th spot in the league with 68 points. Blackwood enters the week in second place among top goals, as leads the league with a .931% save percentage, sits second in goals against average at 2.35 and sits 5th in wins with 22.

After their game against the Attack, the Colts will travel back to BMC where they will host the Hamilton Bulldogs. The game marks the fourth and final time the two teams will square off with Hamilton currently leading the season series 2-1. The Colts look to continue the trend of “defending your home soil” in the season series as the home team has taken every game so far. The last time the Colts and Bulldogs squared off was back on January 16th at First Ontario Centre where the Bulldogs edged the Colts 6-4. Justin Scott recorded two goals while Rasmus Andersson notched three assists in the loss.

Through 52 games this year, the Bulldogs have a record of 19-27-6-0 where they sit 4th in the East Division with 44 points. Hamilton currently sits 8th in the Eastern Conference as they are just one point up on the Oshawa Generals for the final playoff spots. Hamilton’s powerplay is ranked 11th in the OHL as they scored on 19% of their opportunities with the man advantage while their penalty kill ranks tied for 9th with the Colts as both teams as killed off 81.6% of their short handed chances.

Trent Fox and Michael Cramarossa lead the Bulldogs in points as both played has 42 points on the season. Fox leads Hamilton in goals with 23 while Cramarossa leads the team in assists with 29. Stephen Harper and Mason Marchment were also amongst Hamilton’s leading scorers before both over-agers were traded to Niagara and Mississauga respectively. Cole Candella has been Hamilton’s most productive defenceman as the sophomore has 4 goals and 16 assists in 37 games. Matthew Strome, the younger brother of New York Islander Ryan Strome and Erie’s Dylan Strome, has been the Bulldogs’ top rookie. After scoring the overtime winner in the 2015 OHL Cup Final with the Toronto Marlboros, the Bulldogs selected Strome with the 8th pick in the 2015 OHL Priority Selection. In his rookie season, Strome has accumulated 8 goals and 15 assists in 46 games.

Following a day off Friday, the Colts will be back in action as they welcome the Guelph Storm to town Saturday night. The two played their only game just over a month ago on January 8th where the Storm got the best of the Colts 5-2. Givani Smith recorded 2 goals and an assist while James McEwan added a goal and an assist of his own while Kevin Labanc and Kody Gagnon would find the back of the net for Barrie.

Through 50 games, the Storm have a record of 11-33-4-2 and sit in 5th place in the Midwest Division with 28 points. Guelph currently sits last in both the Western Conference as well as the OHL as they trail Sudbury by 4 points. The Storm has the league’s 17th ranked powerplay as they scored on 16% of their opportunities while their penalty kill ranks 19th at a 75.8% effectiveness.

Despite their season, the Storm do have a lot to be excited for the remainder of this year as well as the seasons to come. Leading the way for the Storm has been James McEwan as the Chatham native has recorded 20 goals and 39 assists which leads the team. The Colts will also welcome back a pair of former players in Givani Smith and CJ Garcia. Smith, who was drafted 13th overall by the team in the 2014 OHL Priority Selection played 31 games, recording 4 assists. Garcia’s tenor was much longer as he played 116 games for the Colts before him and Smith were traded back on January 15th, 2015. In 2015-16, Smith is second on the Storm in goals with 19 and tied for second in points with 30. Garcia’s year has been steady, recording 3 goals and 18 assists in 50 games. Garrett McFadden leads the team in defensive scoring as he has tallied 8 goals and 22 assists in 48 games.

The top two seeds in the Eastern Conference will go head to head on Family Day as the Colts roll into Kingston to take on the Frontenacs. Monday’s game will mark the fourth and final meeting between the two teams as Barrie leads the season series 2-1. The Colts and Frontenacs last played at BMC on January 23rd where the Fronts bested the Colts 6-5 in a shootout. Andrew Mangiapane, Dylan Sadowy, Kevin Labanc, Keigan Goetz and Greg DiTomaso each scored while Michael Webster added three assists in the loss.

Through 50 games this season, Kingston has a record of 32-14-2-2 as they are first in both the East Division and the Eastern Conference with 68 points. The Frontenacs lead the Colts in the Eastern Conference by two points as both sides look to compete for the top seed and home ice advantage throughout the Eastern Conference playoffs. Kingston’s powerplay is 6th in the league, converting on 20.5% on their chances while the penalty kill remains the league’s best, working at an 84.1% success rate.

Leading the way for Frontenacs has been Kings’ prospect Spencer Watson. Through 48 games, Watson has posted 28 goals and 33 assists and his 61 points puts him in a tie for 13th in league scoring. Watson was named Pioneer Energy’s Player of the Week this past week as he recorded 3 goals, 5 assists and a +6 rating in games against Hamilton and Oshawa. Michael Dal Colle has also been a key contributor for the Fronts since being acquired from the Generals at the trade deadline. Dal Colle has registered 15 goals and 16 assists in 14 games since the trade and his recent surge has put the Woodbridge native in the top 20 in scoring. Team Canada defenceman Roland McKeown and Stephen Desrocher haves been Kingston’s most productive blueliners as the duo rank 8th and 9th respectively in scoring among defencemen. McKeown has 6 goals and 28 assists while Desrocher is one of only eight defencemen with a double digit goal total as he currently sits with 10 to go along with 23 assists. Jason Robertson has been Kingston’s best rookie, notching 27 points in 42 games. His 16 goals are good for fifth amongst all rookies and first amongst players born in 1999.