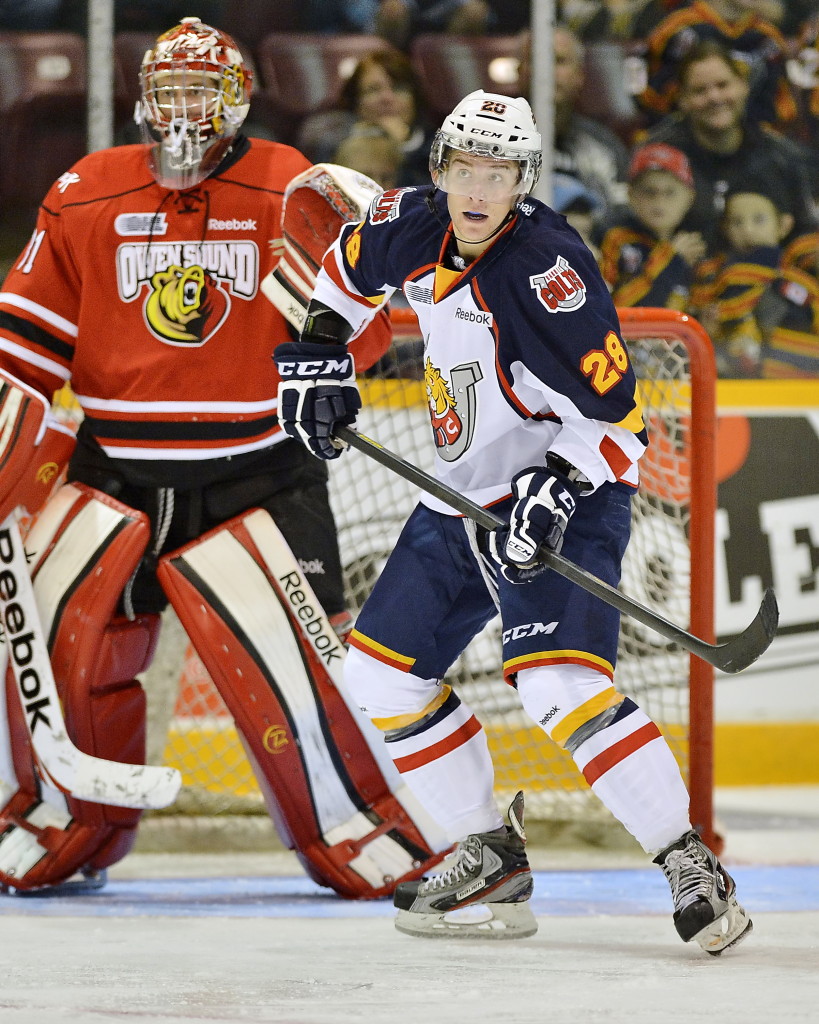 Toronto, ON – The Ontario Hockey League today announced the Top OHL Performers of the Month for October, 2012, including Zach Hall of the Barrie Colts, defenceman Frank Corrado of the Sudbury Wolves, rookie Connor McDavid of the Erie Otters, and goaltender Jordan Binnington of the Owen Sound Attack.

Zach Hall scored six goals and 10 assists for 16 points in nine games with a plus-minus rating of plus-4.  He led the Barrie Colts in scoring in October with the club producing an 8-1-0-1 record to take over first place in the OHL standings with 23 points through 15 games.  Hall had a point in seven of his nine games played and recorded a pair of milestones including his first career six-point game and his first career hat-trick.  His six-point performance came on October 18 where he scored two goals and four assists as second star of a 7-3 win over the Ottawa 67’s, then scored three goals on October 27 as first star of a 4-1 win over the Niagara IceDogs.

Hall, a 19-year-old from Belleville, ON, is currently playing in his third full season with the Colts.  Fourth in OHL scoring, Hall has nine goals and 13 assists for 22 points in 13 games and was recently added to the Team OHL roster for the 2012 SUBWAY Super Series game to be played November 8 in Guelph, ON.

Frank Corrado tied for the league-lead in scoring among defencemen with 12 points in 11 games for the Sudbury Wolves including one goal and 11 assists with a plus-minus rating of plus-2.  He was named OHL Player of the Week to close out October and was the first defenceman to win the award this season following a three-game stretch where he recorded seven points in three games.  That stretch included a career-high five assists on October 26 where he was named first star of a 7-2 win over the Niagara IceDogs.

Corrado, a 19-year-old from Woodbridge, ON, is playing in his fourth OHL season with the Wolves.  Selected in the fifth round of the 2011 NHL Entry Draft by the Vancouver Canucks, Corrado has 16 points in 16 games which has him ranked third in scoring among defencemen.  He will also compete for Team OHL at the 2012 SUBWAY Super Series on Monday November 12 in Sarnia, ON.

Connor McDavid picked up 12 points in 10 October games for the Erie Otters scoring six goals and six assists with a plus-minus rating of plus-6.  He recorded a point in all 10 games extending his league-high point-streak to 14 games which began in his second career game.  His month was highlighted by a first star performance in the Otters’ home opener October 5 where he scored two goals including the game-winner as part of a 5-1 win over the Brampton Battalion.

McDavid, a 15-year-old from Newmarket, ON, was selected first overall by the Otters in the 2012 OHL Priority Selection.  He currently leads all rookies in scoring with 18 points in 15 games and was recently added to the Team OHL roster for the 2012 SUBWAY Super Series where he will become the youngest player to compete in the 10-year history of the event when he suits up November 8 in Guelph, ON.

Jordan Binnington backstopped the Owen Sound Attack with a record of 6-1-0-1 in October posting a league-low goals-against-average of 1.96 and league-high save percentage of .940.  He made 30 or more saves in six of his eight starts and was twice recognized as first star of the game including October 10 where he made a season-high 42 saves in a 4-2 win over the Plymouth Whalers, and October 27 where he stopped 34 shots in a 3-1 win over the Sudbury Wolves.

Binnington, a 19-year-old from Gravenhurst, ON, is playing in his fourth OHL season with the Attack.  Selected in the third round of the 2011 NHL Entry Draft by the St. Louis Blues, he leads the OHL with a 1.96 goals-against-average and a .940 save percentage in 12 games where he holds a 9-1-0-2 record.  He will compete for Team OHL in the 2012 SUBWAY Super Series November 8 in Guelph and November 12 in Sarnia, ON.