Knights Too Much For Colts in 6-3 Loss 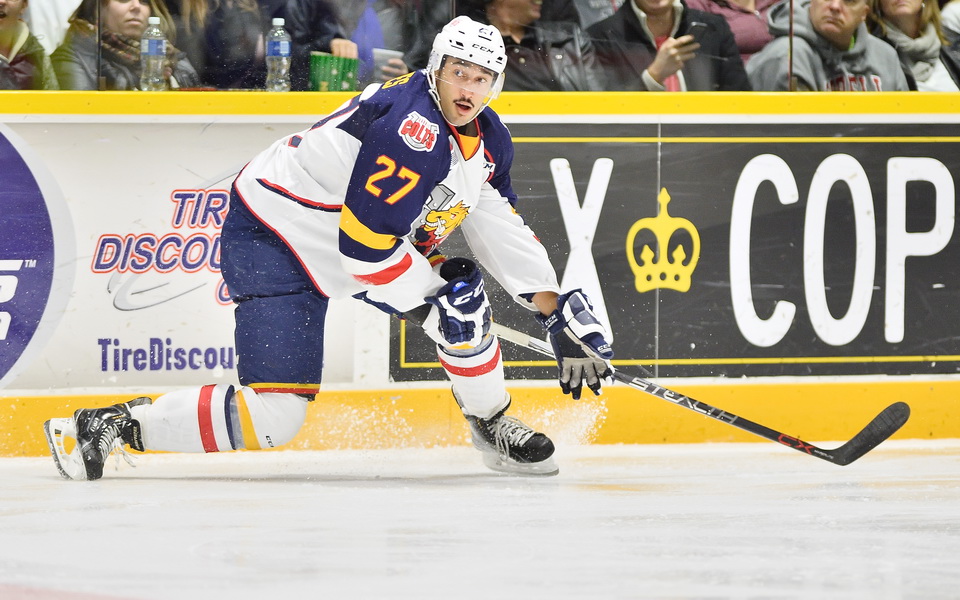 Or Kevin Labanc, or Andrew Mangiapane, or Julius Nattinen.

That’s what the Barrie Colts had to deal with while playing host to the high-flying London Knights on Thursday.

Not surprisingly, things didn’t fall in their favour.

London built up a 6-0 lead before cruising to a 6-3 victory over the Colts.

“I thought we just came out a little flat,” said Colts winger Adrian Carbonara. “We showed a lot of character by winning the third period.

“We’ve got some guys out of the lineup, but I think if we stay disciplined, it’s a team we can play with in the future.”

Barrie did have Anthony Stefano in the lineup, as the forward acquired from Windsor for Brendan Lemieux earlier in the day got to the rink just before the game began and suited up.

The Colts came in decidedly as the underdogs, but held their own in the opening period.

Unfortunately, the scoreboard still wasn’t very kind to them.

Barrie’s Roy Radke had a couple of excellent chances in the early going, both for himself and by virtue of setting up Lucas Chiodo, but London starter Tyler Parsons shut the door on the Colts attack.

At the other end, the Colts defencemen did their part to limit the quality chances on rookie goaltender Christian Propp, who was making his first-career OHL start.

But the Knights, who came into the game with a league-leading 34.3% on the man advantage, were able to improve on that mark during their only power play of the first period.

A crafty passing play going from Christian Dvorak to Matthew Tkachuk to J.J. Piccinich led to a one-timed goal by the former Boston University Terrier, giving London a 1-0 lead.

“We were just running around and weren’t playing smart defensively,” said Colts winger Chiwetin Blacksmith. “Especially with their power play, which is really strong, we just didn’t cover our zone properly.”

The Knights doubled that advantage late in the first, when Max Jones broke away on the counter-attack and snapped a shot past Propp on the glove side, making it 2-0 London after 20 minutes.

That goal would lead things from bad to worse for Barrie.

Early in the second period, the Knights capitalized off of a crazy bounce from the end boards and used it to send a pass across to Owen MacDonald to make it 3-0 London.

Just over a minute later, the Colts couldn’t clear the puck and Chandler Yakimowicz took a feed from Robert Thomas as he went through the slot, beating Propp five-hole to increase the cushion to 4-0.

“With guys out of the lineup, guys tend to get away from their game a little bit, and we did that tonight,” Carbonara said.

That was it for Propp, as he was replaced by Ruan Badenhorst for the rest of the night.

While the slightly-more experienced Tiny Township native was able to hold the fort a little better, that didn’t completely slow down the Knights.

London made it 5-0 while shorthanded, as Dvorak stole a puck at his own blue line and went down the ice before slipping the puck through Badenhorst’s legs.

The Knights capped off a dominant second with another tic-tac-toe effort, as Aaron Berisha was the beneficiary for his 18th goal of the year.

40 minutes in, and Barrie was down by six.

“We just need to clean up our work in the defensive zone,” Carbonara said. “We can’t be blaming the goalies, because we gave them some easy back-door (goals) that we should have had covered.”

The third period could have been gone either way depending on how the Colts came out.

It turns out they were ready to play.

To read the rest of the article, please click here.