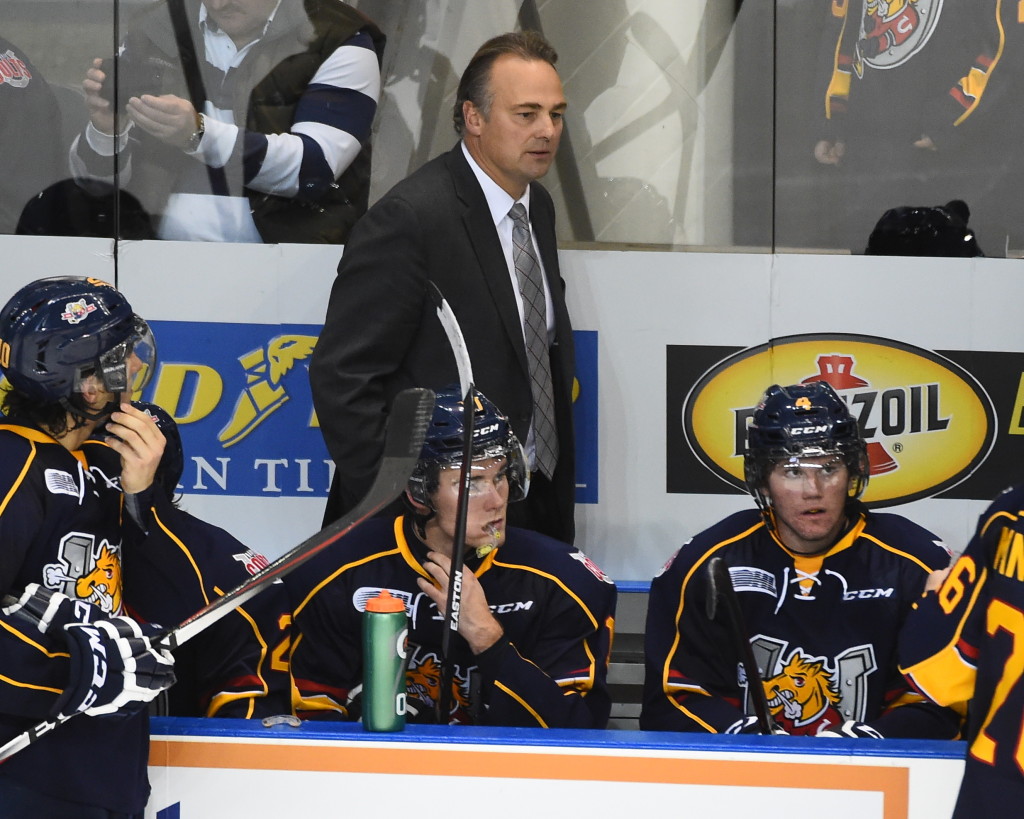 The Barrie Colts continued their strong play Sunday afternoon in Ottawa at TD Place, coming out on top with a 5-3 victory. Cordell James scored a pair while Brendan Lemieux also scored twice for the second straight game. The win marked Head Coach Dale Hawerchuk’s 150th career win in just his fifth season behind the bench.

The opening period saw the Colts penalty kill tested early on after being shorthanded for six of the first ten minutes of the hockey game. Netminder Mackenzie Blackwood came up with some big saves, as the Colts were out shot 10-6 in a scoreless first period.

Brendan Lemieux opened the scoring at 6:04 of the second period on an odd-man rush scoring his 18th of the season. Defenceman Jonathan Laser’s outlet pass sent Kevin Labanc and Brendan Lemeiux in on a 2-on-1, where Lemieux would go to his backhand before sliding it five-hole on goaltender Leo Lazarev.

Just over two minutes later the Colts power play would strike, as Andrew Mangiapane pounced on a loose puck at the side of the Ottawa net burying his 16th of the year. Rasmus Andersson and Joseph Blandisi were credited with the assists.

In the later stages of the second period the Ottawa 67’s would strike twice to quickly tie the game back up at 2-2. With a great burst of speed from his own zone, Dante Salituro would skate into the Barrie end before ripping a shot low glove side past Blackwood.

Minutes later Travis Barron would tie the game up at two a piece, but the Colts would respond quickly. At 17:08 centreman Cordell James who was trailing the play, picked up the puck in the slot before going top shelf over Lazarev for his third of the year. The Ottawa 67’s held the edge in shots 25-18 after forty minutes.

The third period saw the Colts regain their two-goal lead, as Cordell James would score his second of the afternoon. After an attempted pass was deflected, James found the loose puck and showed great patience out waiting goalie Leo Lazarev to put Barrie out-front 4-2.

Just 46 seconds later with a man advantage, the Colts would increase their lead to three. Parked out-front of the 67’s net, forward Brendan Lemieux would tip home a Kevin Labanc wrist shot from the point for his second of the game. Andrew Mangiapane would alos pick up an assist on the play.

Ottawa would add another but it was to little to late as the Barrie Colts skated to their third straight victory. Mackenzie Blackwood had another strong outing making 31 saves on the afternoon meanwhile rookie forward Chiwetin Blacksmith made his OHL debut.

The Colts will now be off until Saturday December 13th, when the Kitchener Rangers make there one and only visit to the Barrie Molson Centre. Tickets are still available at www.ticketbreak.com or by clicking here. Game time is 7:30pm.