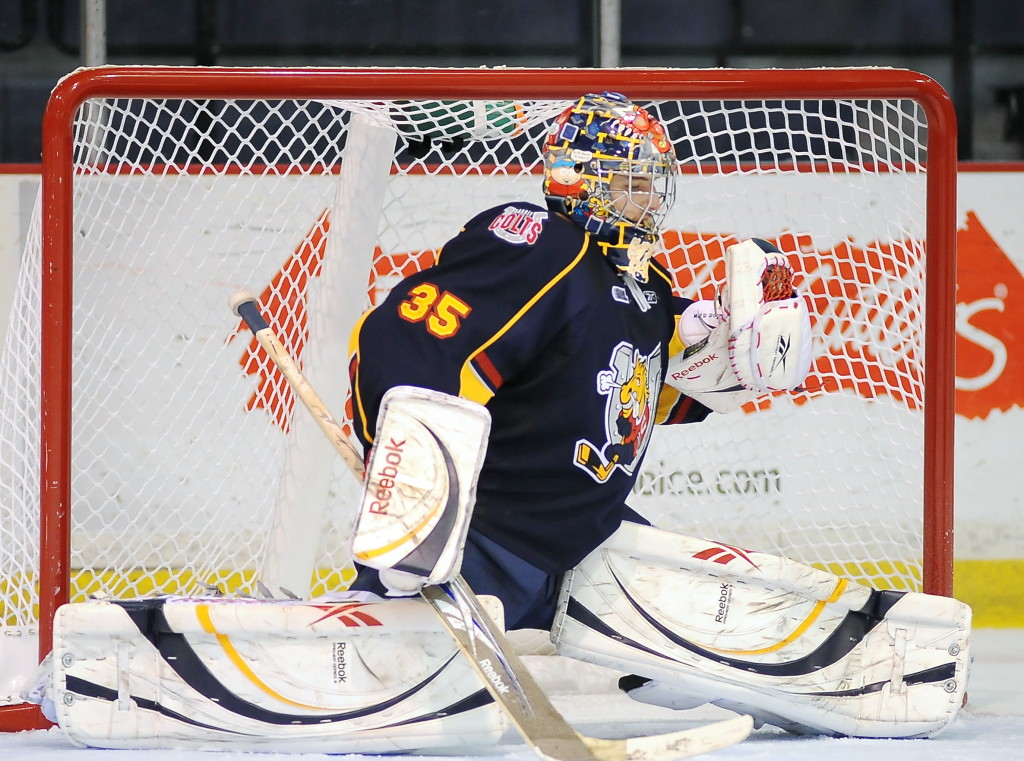 The Sault Ste. Marie Greyhounds and Barrie Colts combined for eleven goals in the first 40 minutes at the BMC Saturday night.  The Greyhounds held on to their 6-5 lead and came out victorious as Barrie dropped their seventh straight.

Clint Windsor started for Barrie but was replaced by Peter Di Salvo early in the middle period after allowing four goals on 17 shots.  Barrie’s starter allowed two goals through the next two periods as the Greyhounds skated to a 6-5 win.

Chris Perugini looked shaky at times but back-stopped the Greyhounds to their second straight win.  On Friday, December 3rd the Colts will travel to Sault Ste. Marie to conclude their season-series.

Daniel Catenacci led the way offensively for the Greyhounds with two goals and an assist.  The 17-year old is now riding a seven-game goal scoring streak.

Catenacci and Taylor Carnevale each scored two goals for their respective clubs in the opening preiod, but Brett Thompson’s 16th of the season at 4:16 of the opening stanza gave the Soo a 3-2 lead after the first.

Colin Behenna and Mark Scheifele assisted on Carnevale’s first of the game coming on the power play 2:12 in.  Thompson, who also added an assist, responded just 2:04 later.

Carnevale would complete the hat-trick 44 seconds in to the second from Brandon Devlin and John Padulo to tie the game at three.  Just 17 seconds later Nick Cousins would respond to restore the Greyhounds one-goal advantage.

After Windsor was removed the teams would exchange markers 50 seconds apart as Ryan Sproul and Stephen Gaskin traded goals making it 5-4 Greyhounds.  Gaskin dug out a loose puck and slid it past Perugini for his first of the season.  In total, four goals were scored in 3:56 to start the second period.

After Trevor Morbeck pushed the Greyhound lead to two goals, Behenna came back to make it 6-5 with his seventh of the season from Scheifele and Archibald.

The Colts were unable to tie the game in the final twenty minutes, as they out-shot the Greyhounds 11-9 in the final period.

On Sunday the Colts travel to Brampton for a date with the Battalion at 2:00 p.m.