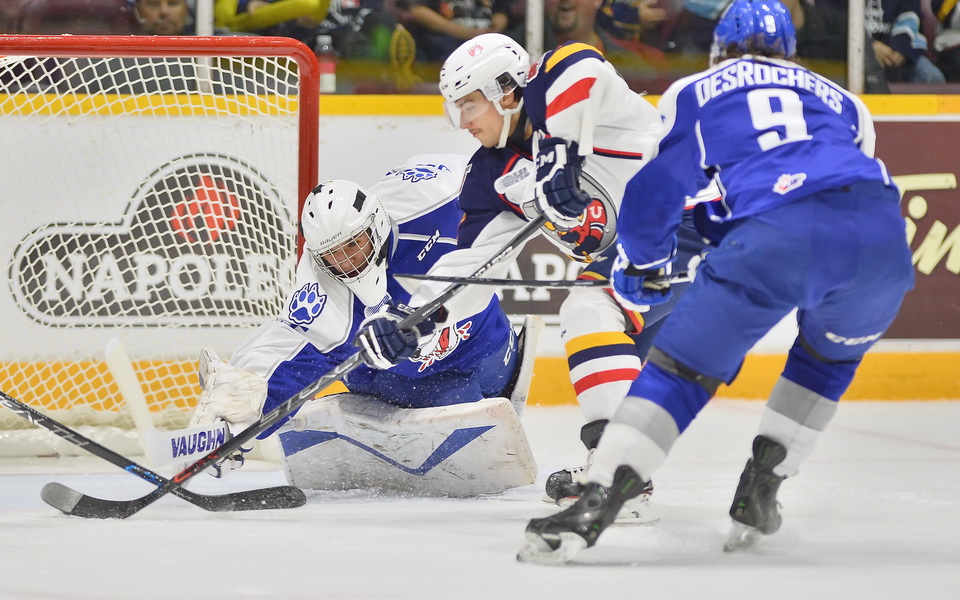 Friday night’s matchup in Sudbury would follow the trend that has been observed so far this season. The Colts got out to a quick start putting up four goals in the first period alone, en route to a 7-1 win.

Colts newcomer and trade deadline acquisition, Dylan Sadowy, had a huge night for the Colts as he recorded his first hat trick with his new squad, and third hat trick of the season. Sadowy had company in the three-point department in Friday night’s win as Andrew Mangiapane recorded two goals and an assist and Kevin Labanc tallied a goal and two assists. Meanwhile, Zachary Magwood also scored for the Colts. Rasmus Andersson notched two assists in the win, along with Michael Webster, Ben Hawerchuk, Lucas Chiodo, Justin Scott and Julius Nattinen who all counted an assist.

In goal, David Ovsjannikov started his eleventh game with the Colts, recording his 6th win with the squad. He stopped 33 of 34 shots that he faced in the game. On the other end, the Colts were able to fore Wolves started, Troy Timpano from the net after nearly 30 minutes of playing time. Timpano let in 6 goals on 19 shots, making 13 saves. His replacement, Zack Bowman, made 20 saves on the 21 shots he faced in his 30 minutes in goal.

The Colts came out hard in the first period, putting up four goals in less than three minutes near the halfway mark of the period.

Nearly 8 minutes into the game while they were shorthanded, Sadowy broke away and scored his first of the game. His 23rd goal of the season was shorthanded. Then, only fourteen seconds later, Mangiapane recorded his 24th goal of the season when he beat Timpano. Labanc had the lone assist on the goal to make it 2-0.

Only 1:10 later and on the power play, the Colts would extend their lead to 3-0 when Mangiapane grabbed his second goal of the game. Labanc and Andersson assisted on Mangiapane’s 25th goal of the season.  The Colts would then top off their four-goal span with a second tally from Sadowy just over the halfway mark. Sadowy tipped home Webster’s point shot to notch his second of the game, making it 4-0.

The second period would see the Colts add two more goals, while the Wolves got on the board themselves, recording their one and only goal of the game.

The third period would see quite a few penalties handed out on both side. The Colts would capitalize on one of their power play opportunities in the third as Sadowy scored his third goal of the game seven and a half minutes into the period. Nattinen and Andersson assisted on the goal to make it 7-1.

The Colts were 50% on their power play chances, scoring twice out of the four chances that they had, while they shut the door on the Wolves for all but one of the five chances they gave them.

Saturday night the Colts return to the BMC for their second of three games in the weekend. The Colts will welcome the Eastern Conference leading Kingston Frontenacs to town for a match between the best in the East. For tickets to the game, visit the BMC Box Office or www.ticketbreak.com.