EKBLAD HAPPY TO BE IN BARRIE 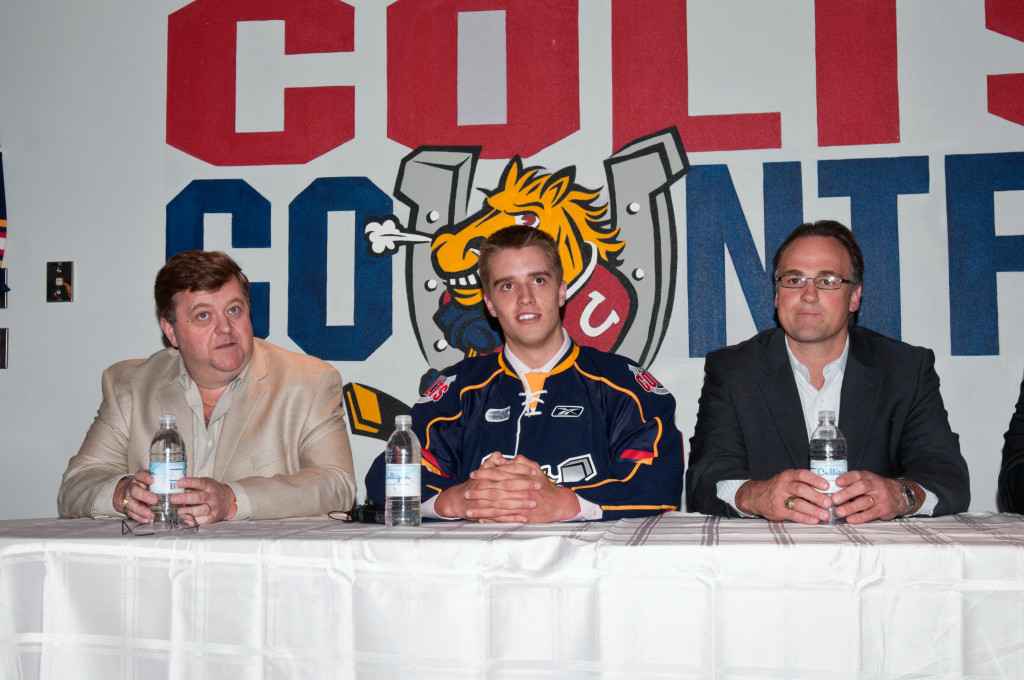 After missing the playoffs for the first time in franchise history the Barrie Colts are hoping the 2011 OHL Draft will help them re-shape their future for the next several years.

Saturday morning at 9:00 a.m. they will take a major step towards the future by selecting Aaron Ekblad first overall in the Ontario Hockey League Priority Selection, presented by State Farm.

“It’s a great feeling, I truly am honoured to be even in the same breath with all of the former number one picks in this league,” said the number one overall pick.

Ekblad joins the Colts as a 15 year-old after gaining exceptional player status by Hockey Canada at the end of March.

“He has very special qualities about him and he really is a great kid,” said Colts Assistant General Manager Jason Ford.  “He does so many things well, he really is everything you could ever want in a player.”

The Colts introduced Ekblad at a press conference Friday afternoon when they unofficially selected the 6’3” defenceman.

“In the first round you always want to take the best player available,” said Woodley.  “This year its nice to have that exceptional player available, that takes some of the pressure off a little bit.”

The Colts received the first overall selection after last season they missed the playoffs for the first time in franchise history.  Head Coach Dale Hawerchuk says a player like Ekblad can turn your fortunes around very quickly.

“He’s a big mobile defenceman that reads the game very well and plays hard at both ends.  If every defenceman was like this-it would make a lot of coaches very happy.”

It’s the first time the Colts have owned the number one overall pick since they joined the league as an expansion club in 1995 and selected Daniel Tkaczuk with the first overall selection.

“I knew I had a chance to go number one,” commented Ekblad.  “But it was never really a reality until now, and I definitely don’t think it has set in yet, but it’s a great feeling.”

Ekblad is the first player since John Tavares and only the second ever in the Ontario Hockey League to be granted exceptional player status.

I’ve always dreamed of it,” said Ekblad.  “I grew up watching the OHL constantly thinking of the chance to be here one day.”

“Well I had a great coach last year in Todd Lalonde and he prepared me very well for this.  He was constantly pushing me to go hard and never give up,” Ekblad went on to add.

Before being drafted today, Ekblad’s biggest hockey moment came two seasons ago when he led Sun County to an ALLIANCE Championship title.  As a 14 year-old he was named a First-Team All-Star at the 2010 All Ontario Bantam AAA Championships.

“It was unbelievable to win that championship,” said Ekblad.  “A lot of those guys come from small towns and don’t really get a chance to win championships, so it was very special.”

Ekblad is now preparing himself for the onslaught of media attention and pressure that will come with being named the number one overall pick.

“Pressure is what you make of it and I’m going to try and make the best of it,” said Ekblad.  “I am very proud to be here, I really owe it all to my family and my support group.”

Colts management knows that a player like this will bring back some excitement to the city.

“After the run we had in 2009-10 reaching the OHL Finals and the excitement that it brought to the city, and now having the first overall pick, we’re hoping that he will create some of the same excitement about the team,” said Woodley.

Building through the draft is key in a developmental league such as the OHL, and with four picks in the top-40 including the number one overall, the Colts know they have a great chance to fast-track their re-building process.

“If we’ve done our homework, this draft could set us up for the next couple of years,” said Ford.

Looking past the number one selection Woodley says the Colts should still be able to reel in another impact player.

“Well, with four picks in the top 40 we should still be able to get another impact player with our pick at 22.  That pick should play for us next year, he might not have the same impact but he will be a good hockey player,” Woodley went on to add.

The Colts have collected various draft picks through trades and have prepared themselves accordingly for the draft.  This year the Colts will not only have the first overall pick in the OHL draft, but also the number one selection in the CHL Import Draft on June 29th.

“I think we have a good possibility to get a great player.  I’m glad I went to the Under-18’s, not only to coach Team Canada but it gave me a first hand view of some of the top prospects over there,” said Hawerchuk.

“It’s just a question of whether they want to come or not, some of them will stay there and some times they’re so good that they can play in the pro league and start to draw a salary.  The advantage to us picking number one is that it gives that player a lot of notoriety right away and really puts him on the NHL radar.”

Barrie has 17 picks through the 15-round Priority Selection and you can follow along with all the Colts picks at www.ontariohockeyleague.com. 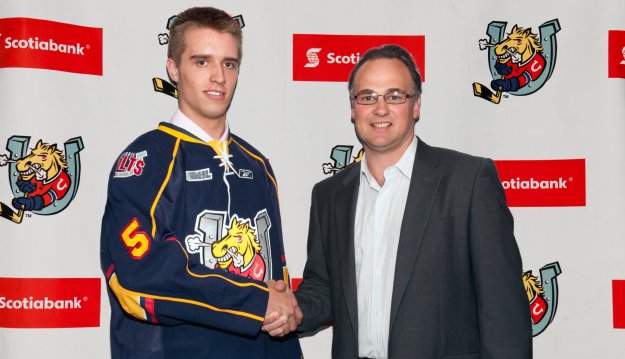