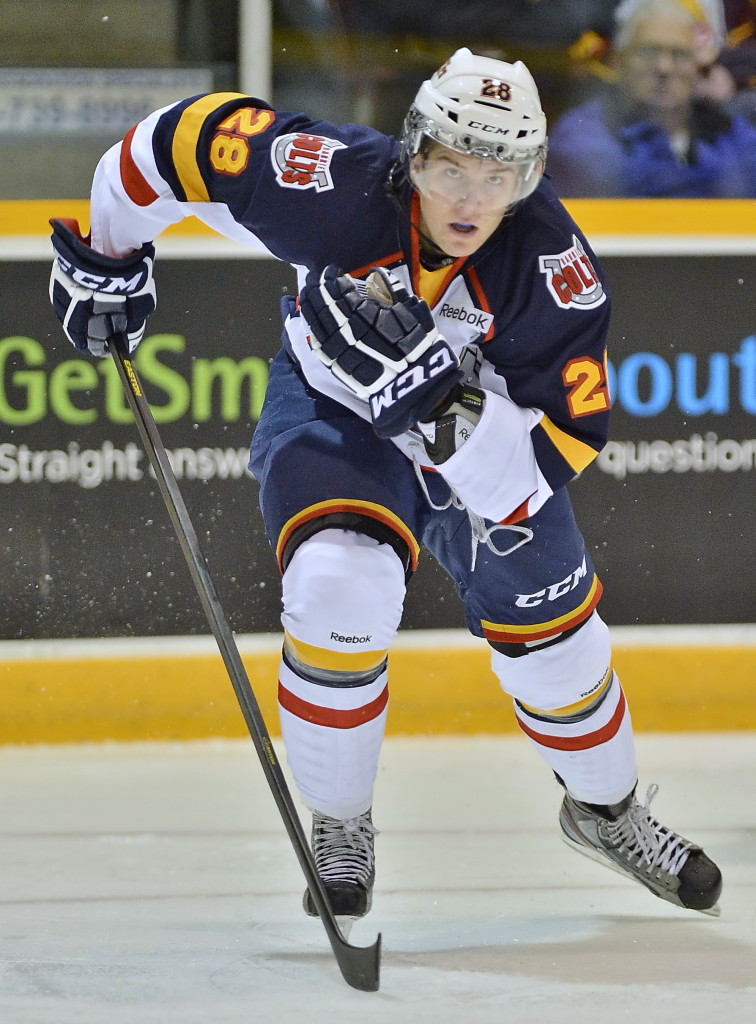 The Barrie Colts got the best of the Niagara IceDogs this evening and remain unbeaten in regulation time on home ice.

The Niagara IceDogs would open up the scoring at just 3:25 into the first period when they jammed the net and eventually put it passed a sprawling Mathias Niederberger. Anthony DiFruscia would get credit for the goal while Joel Wigle and Brock Beukeboom picked up the assists. At the midway point of the first the Colts would get the equalizer. Ryan Strome of the Icedogs was sent to the box for high sticking giving the Colts the power play. Zach Hall would receive the puck on a sharp angle where he riffled a shot of the bar and in passed goaltender Christopher Festarini. Mark Scheifele and Ryan O’Connor assisted on the play.

From the start of the second period on, the Barrie Colts took control of the game. The Niagara IceDogs would take four straight penalties, which would prove costly as they were up against the highest ranked power play. The Colts had a 5 on 3 where Andreas Athanasiou would put on a clinic dancing around the Niagara defense and eventually put it home blocker side. Aaron Ekblad got the lone assist. Late in the frame Aaron Ekblad would receive a questionable checking to the head penalty and was ejected from the game. The Barrie Colts would take the 2 – 1 lead into the third period.

The Colts came out hard in the third trying to increase their lead. At 3:22 Zach Hall tipped home is second of the game. Andreas Athanasiou would take a shot from the point where Hall would tip it up and over IceDogs Christopher Festarini. Ryan O’Connor would also get an assist. After a fight between Jonathan Laser and Mack Lemmon, the Colts would find themselves two men down giving Niagara a 5 on 3 chance. The old cliché about your goaltender needing to be your best penalty killer proved to be true as Mathias Niederberger shut the door and kept the Colts lead at 3 – 1. Zach Hall would put this one away for the Barrie Colts notching his third goal on the night, completing his first career OHL hat trick. Hall scored on the power play and now moves into second place in league scoring with 22 points only behind teammate Mark Scheifele who has 23 points on the year. Mathias Niederberger made 26 saves on the night for his league leading 10th win on the season.

The first place Barrie Colts (11-3-0-1) will now head out on the road and will not play on home ice until November 10th vs.  the Brampton Battalion. The Colts next game will take place in Sudbury, Friday November 2nd, 2012 versus the Wolves at 7:35.