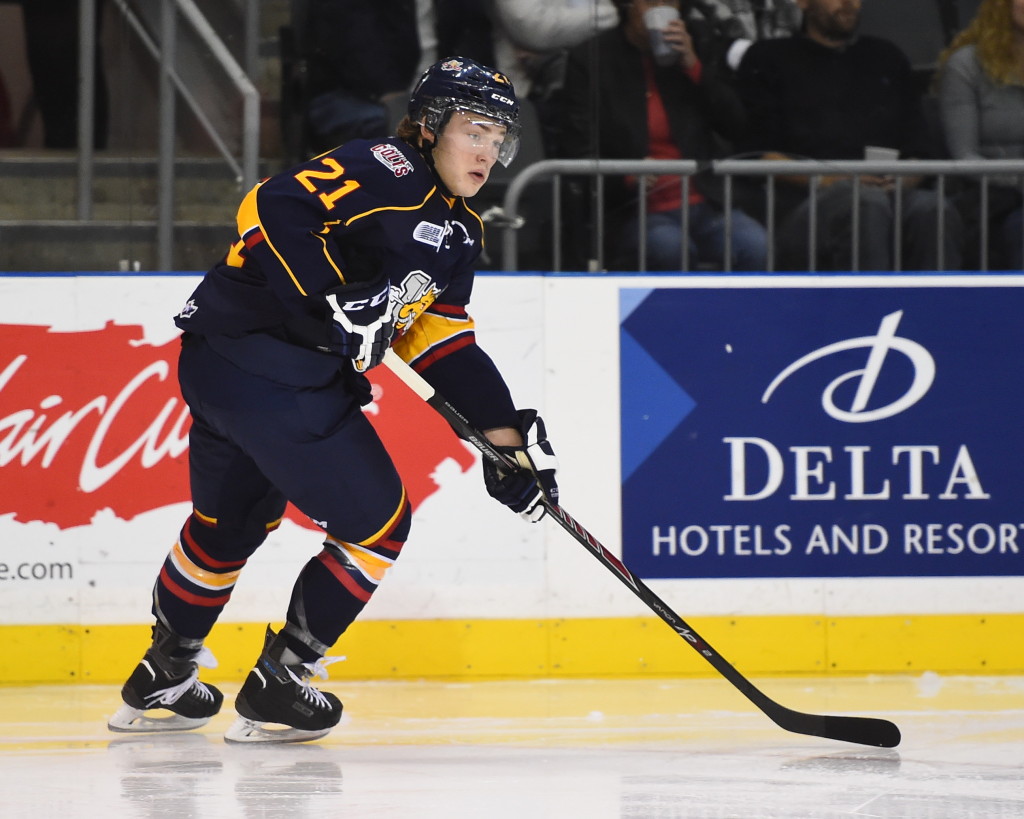 For the second time this season, the Barrie Colts took on the Flint Firebirds. This time, the Colts traveled to Flint, Michigan to face the West Division Firebirds at the Dort Federal Credit Union Event Centre. The first meting between the two teams in Barrie saw the Colts come out on top with an 8-5 win over the Firebirds.

It would take longer than usual for the Colts to jump on the scoreboard, but once they did, the Colts held on to the lead and wouldn’t look back en route to a 4-1 victory.

Brendan Lemieux would score his first hat trick of the season, grabbing all but one goal for the Colts in Saturday’s game. Setting up each of those goals was Kevin Labanc, who recorded the only assist on each of Lemieux’s goals. Ben Hawerchuk would score the first goal for the Colts, while Cordell James assisted.

After a scoreless first period, the Colts would draw first blood. The Colts were broke back into the Firebirds zone and Hawerchuk was able to find the back of the net below the goal line. Hawerchuk’s would somehow slip it past Alex Nedelijkovic after James initially threw the puck on net to give the Colts the lead about going more than 28 minutes scoreless.

With 7 minutes to go in the middle frame, the Firebirds had a great chance when Ryan Moore fed the puck in front to Will Bitten who was breaking in. Bitten got a good shot off, but not good enough to beat Mackenzie Blackwood, and it remained 1-0 for the Colts.

Moments later, Chiodo nearly made it 2-0 when he was sprung on a breakaway but couldn’t finish on the deke.

The second period would see the Firebirds outshoot the Colts 13-10, but with the Colts ahead 1-0.

Only 3:01 into the third period, Labanc would break into the Firebirds zone and fire a shot from the left side. The rebound directed perfectly to Lemieux who was coming in hard on the doorstep, and he buried his first goal of the game to extend the Colts lead to 2 early in the third period.

The last four minutes of the game would see three quick goals exchanged. With 4:38 to go in the game, Flint got on the board when Mathieu Henderson fed a slap pass on net that Connor Chatham redirected home. Chatham’s fourth goal of the season would bring the Firebirds within 1 goal late in the game.

But only 22 seconds later, the Colts would answer and shut down a Firebird comeback. From the Colts blue line, Labanc made a great feed up ice to Lemieux, who in turn broke into the zone and sniped blocker side. Lemieux’s second of the night would extend the Colts lead to 3-1 with 4:16 remaining.

Then, with 1:27 remaining and the Firebirds net empty, the Colts sealed the deal with Lemieux scored his hat trick goal. Mirroring every goal prior, Labanc fed Lemieux after breaking up a Firebirds chance, making it a 4-1 final.

With a quiet game on the penalty front, neither team was able to capitalize on their power play chances, with the Colts getting one power play, and the Firebirds getting two cracks at the man advantage.

Sunday the Colts are back at it when they continue their travels to take on the Saginaw Spirit. The previous meeting between the two teams saw the Colts grab a 5-1 win.