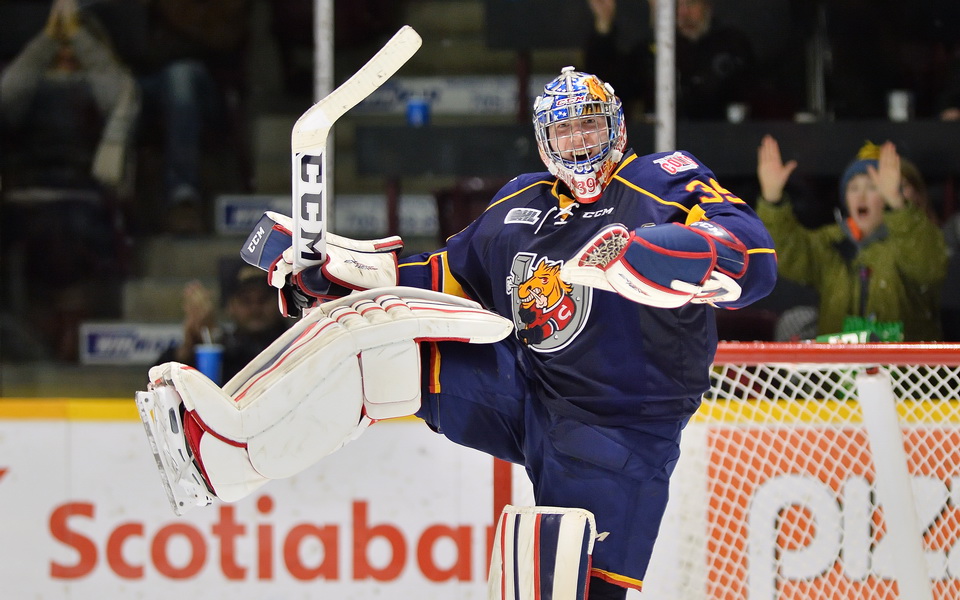 Following consecutive losses against Windsor and Sarnia, the Colts looked to get back in the win column Saturday night as they hosted the Mississauga Steelheads. The Colts were 4-1-0-0 prior to Saturday night’s game, having outscored the Steelheads 25-13 in that span.

The beginning of the game promised to see both teams looking to gain the edge following tough losses on Friday night. The Colts fell 6-2 to the Sting in Sarnia while the Steelheads are coming off a 10-2 defeat at the hands of the Owen Sound Attack.

The Colts would take get on the board first 9 minutes into the game, as Andrew Mangiapane would streak down to the left side before cutting into the slot where he ripped one past Steelheads’ goalie Jack Flinn. The goal was Mangiapane’s 44th of the year as he surpasses his total of 43 from last season, with Dylan Sadowy and Michael Webster drawing the assists.

Later in the frame, the Colts would extend their lead to two with a power play goal from Dylan Sadowy. After Sean Day was sent off for interference, the Colts would work the puck around where Julius Nattinen’s one-timer would be stopped but the rebound bounced right to Sadowy who made no mistake to make it 2-0 Colts. The tally was Sadowy’s 37th on the season, and Nattinen and Rasmus Andersson had the assists.

With just under four minutes left in the first period, the Colts would again capitalize on the power play to make it 3-0. After Daniel Muzito-Bagenda was penalized for hooking, Rasmus Andersson’s point shot would ring off the post and land on the stick of Julius Nattinen as he ripped it past Flinn who couldn’t track the puck. Rasmus Andersson and Kevin Labanc would get the assists on Nattinen’s 18th of the season.

The Colts entered the second up 3-0, leading Mississauga in shots 9-5.

The Colts would open the floodgates halfway through the second period as they would score three times in exactly two minutes to put themselves up 6-0. The first would come off the stick of Michael Webster when he blasted a slapshot by Flinn for his 7th of the season. Anthony Stefano and Julius Nattinen drew the assists on Webster’s marker.

The second of the three would come from Cordell James. After making a nice move, Ben Hawerchuk would find James, and he made no mistake putting it past Flinn for his 17th of the year. Hawerchuk and Andersson were rewarded in the helpers.

Dylan Sadowy would convert the sixth goal for the Colts. After Justin Scott feed Sadowy with a lead pass, the two would enter Mississauga’s zone and Sadowy would fire it blocker side on Flinn for his second of the game. Andrew Mangiapane registered the secondary assist on Sadowy’s 38th of the year.

The scoring didn’t stop there for the Colts though, as another Steelheads’ penalty would lead to another Barrie as goal. This time, it’d be none other than Kevin Labanc who would wire a wrist shot from the top of the circle through Flinn’s legs. Greg DiTomaso and Julius Nattinen had the assists, and Labanc’s 36th of the season would mark the Colts third power play goal of the night.

With less than two minutes to go in the second, the Colts would add one more. This time, Labanc would set up Justin Murray for a tap in to make it 8-0.

After two periods, the Colts led Mississauga 8-0, out-shooting the Steelheads 22-16.

The third period saw the Steelheads trying to break up David Ovsjannikov’s shutout bid. Despite an abundance of chances, they couldn’t get one by the Czech native as he stopped all 11 shots in the period as the Colts would take it by a final score of 8-0. Ovsjannikov stopped all 27 shots he faced to pick up his 11th win of the year & his first career OHL shutout.

Speaking of milestones, both Kevin Labanc and Andrew Mangiapane crept closer to milestones of their own. With a goal and two assists, Labanc now has 112 points on the year and sits 9 points back of Sheldon Keefe’s single season mark of 121 points, set back in 1999-2000. Andrew Mangiapane’s first period goal inched him closer to the Colts’ single season record of goals held by Bryan Cameron. Currently, Mangiapane has 44 goals on the season, which is 9 behind the 53 Cameron scored during the 2009-10 season.

The next Colts’ home game takes place on Thursday, March 3rd when they welcome the Ottawa 67’s into town. Get your tickets now by visiting BMC Box Office or going to www.ticketbreak.com.