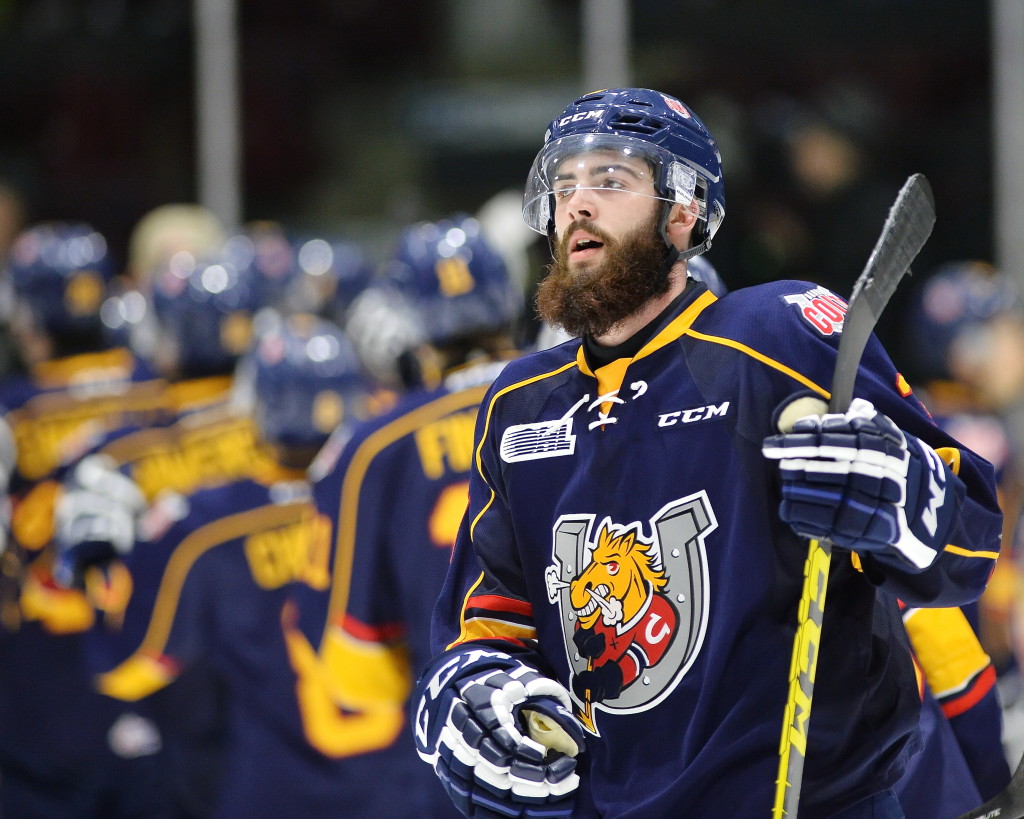 In their first meeting of the season, the Colts’ would extend their winning streak to seven games after a 5-2 win over the Peterborough Petes. Andrew Mangiapane scored twice, becoming the OHL’s second 50-goal scorer on the year, joining London’s Christian Dvorak as Justin Scott, Kevin Labanc and birthday boy Adrian Carbonara would round out Barrie’s scoring. Mackenzie Blackwood was solid in goal, making 36 saves for his 27th win of the season.

The first period could not have gone better for the Colts as they jumped out to a 3-0 lead, while Mackenzie Blackwood made some big saves, stopping all 12 shots he saw in the frame.

Justin Scott opened the scoring four minutes in with a shorthanded goal. After Rasmus Andersson was sent off, the Colts 5th ranked penalty kill went to work as they forced a turnover in Peterborough’s end resulting in Scott taking the puck in front of the net where he buried one by a sprawled out Matthew Mancina. The goal was Scott’s 25th of the season.

The Colts extended their lead to two later in the frame as birthday boy Adrian Carbonara scooped up the Rasmus Andersson rebound and shovelled it by Mancina for his 8th of the season.

With a 1:44 left in the period, the Colts stretched their lead to three. Just as the Petes’ powerplay had expired, Andrew Mangiapane forced a turnover at the Colts’ blue-line, leading to a 2 on 1 where he fed Kevin Labanc who buried into the yawning cage. The goal was Labanc’s 39th of the season as Mangiapane received the lone assist.

The second period saw a goaltending duel emerge as Mackenzie Blackwood and Matthew Mancina put on a show with each netminder coming up with big saves on quality scoring opportunities.

As the second period was coming to a close, the Colts would score their second short-handed goal of the night as Andrew Mangiapane and Roy Radke broke in on another Colts’ 2 on 1. However, Mangiapane decided to keep it, wiring it blocker side on Mancina to make it 4-0 Colts. The goal was Mangiapane’s 49th and his 100th point of the season.

Despite trailing by four through forty minutes, Peterborough did not back down as they generated what seemed like a potential comeback, scoring twice on Blackwood in the third period.

Halfway through the period, Logan DeNoble took a pass in front of the Colts’ net where his initial shot was stopped but followed up the play by picking up the rebound and tucking it in for his 18th goal of the season, ending Mackenzie Blackwood’s shutout bid.

Minutes after DeNoble’s goal, the Petes would capitalize again as Matthew Spencer’s point shot deflected off Cameron Lizotte and past Blackwood for his 5th of the year, cutting the Colts’ lead to 4-2.

That would be as close as Peterborough would get as Andrew Mangiapane solidified a Colts win with an empty netter for his second of the game and number 50 on the year; his 101st point. Mangiapane becomes the 6th player to reach 100 points for the season joining the likes of Kevin Labanc, Christian Dvorak, Mitch Marner, Dylan Strome and Matthew Tkachuk.

The Colts play four times next week starting with a rematch of tonight’s game in Peterborough Tuesday night. Following their game against the Petes’, the team will make their way to the nation’s capital to square off against the Ottawa 67’s. The season rounds up the following weekend as the Colts host the Sudbury Wolves Saturday, March 19th, before heading to North Bay for a Sunday afternoon tilt with the Battalion. Get your tickets for Saturday’s game by visiting BMC Box Office or going to www.ticketbreak.com.