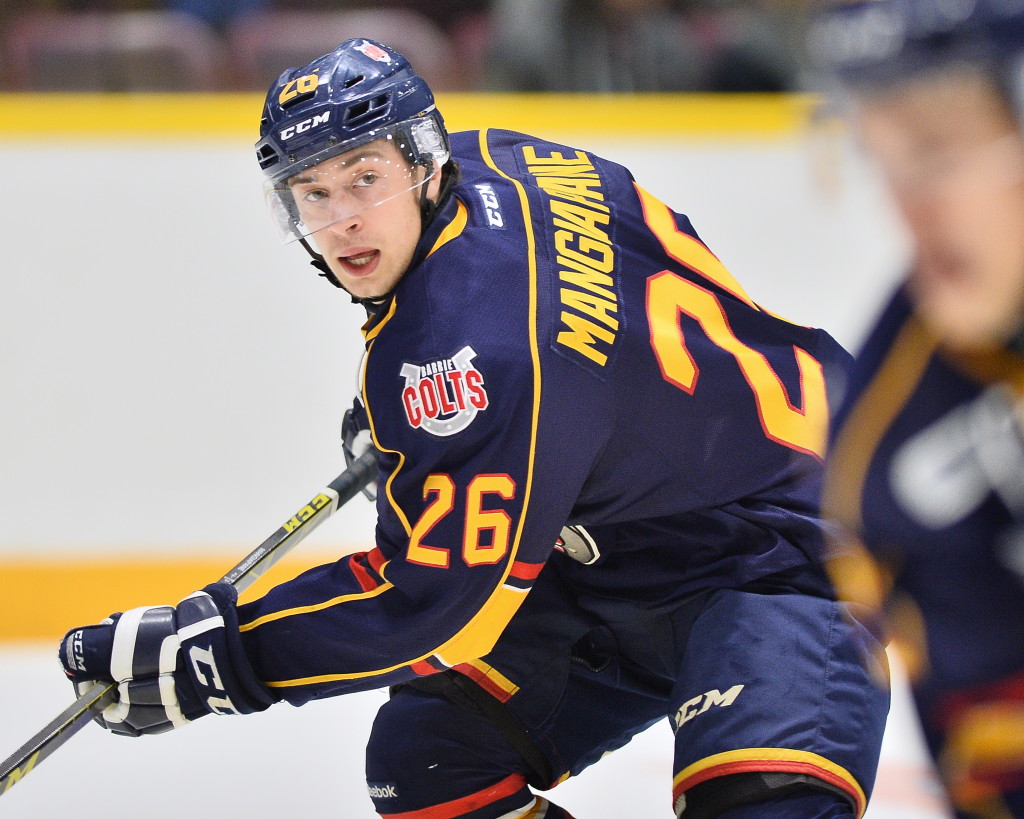 The Colts looked to extend their win streak to 5 games when they hosted the Mississauga Steelheads in a Central Division showdown. The two teams last played on January 24th where two goals by Dylan Sadowy led the Colts past the Steelheads 4-2. Tonight’s game marked the 5th time the two teams have played with Barrie claiming victory in 3 of the 4 contests.

The Steelheads would take the lead just two minutes in as Mason Marchment would feed Ryan McLeod to would put the backhand by Blackwood for his 6th goal of the season as Marchment would receive the lone assist on the goal.

The remainder of the period saw both teams play a strong defensive game that limited each teams quality scoring opportunities.

As the period winded down, the Steelheads seemed destined to enter the second with a one-goal lead. However, the Colts would chance that in a matter of seconds as they would score twice in the final minute to lead 2-1, heading into the first intermission.

The first would come off the stick of Andrew Mangiapane after he finished off a beautiful cross crease pass from Julius Nattinen for his 32nd of the season. The goal would also mark Mangiapane’s 99th OHL career goal as Kevin Labanc would record the secondary assist. The second would happen 22 seconds after Mangiapane as Anthony Stefano would finish off the Cordell James’ pass, slipping it behind Steelheads’ goalie Jack Flinn for his 14th goal of the season.

The Colts began the second like they ended the first; with a physical forecheck that allowed them to keep the puck in the Steelheads’ end for a lengthy amount of time. That pressure would pay off as the Colts took a 3-1 lead only five minutes into the second. Roy Radke would take the puck at the top of the circle and wire a wrist shot under the pad of Flinn. The goal was Radke’s 17th of the year as Justin Scott and Justin Murray recorded the assists.

1:41 after Radke’s, the Colts would extend their lead to 4-1 as Andrew Mangiapane would finish off another pass from Julius Nattinen for his second of the game, 33rd of the season and his 100th of his OHL career. Along with Nattinen, Labanc would the other assist on the marker.

Barrie then got ahead 5-1, as the top line of Mangiapane, Nattinen and Labanc would come together for a third time in the game as Mangiapane would finish off the hat-trick. After a Steelheads’ neutral zone turnover, Nattinen would get it to Labanc who slid it to Mangiapane who sneaked behind the Steelheads’ defencemen and buried a backhand over the glove of back-up Joseph Murdaca. The goal was Mangiapane’s 34th of the year and his second hat-trick in 8 days.

The Steelheads would cut the Colts’ lead to three with two minutes left in the second as Daniel Muzito-Bagenda would set up Nathan Bastian in front of the net where he would fire the one-timer through Blackwood’s legs. The goal was Bastian’s 15th on the year as Alexander Nylander also recorded an assist on the goal.

The Colts would enter the third period up 5-2 as they outshot Mississauga through two periods 27-14.

The Colts would waste little time in the third regaining their 4 goal lead a mere 30 seconds into the final frame as Dylan Sadowy would drive the net. After his initial shot was stopped, Sadowy picked up his own rebound and fire it by a sprawled out Murdaca for his 33rd of the season. The goal also lengthened Sadowy’s streak of consecutive games with a goal to 9 as Justin Scott and Rasmus Andersson drew assists.

The Steelheads would once again cut Barrie’s lead to three goals five minutes into the third as Everett Clark would work his way behind the Colts’ defence and slide one five hole on Blackwood for his 10th of the year to make it 6-3 Colts.

Barrie would stall any chance of a Mississauga as they would lock down defensively and hold on for the 6-3 win. Blackwood would stop 23 of 26 shots for his 21st win of the season. With their goals tonight, Mangiapane (34) and Sadowy (33) are now 3rd and 4th respectively in the OHL in goals, trailing London’s Christian Dvorak (40) and Erie’s Alex DeBrincat (38).

Barrie’s next home game is on Thursday, February 11th when they take on the Hamilton Bulldogs. Get your tickets now by visiting BMC Box Office or going to www.ticketbreak.com.