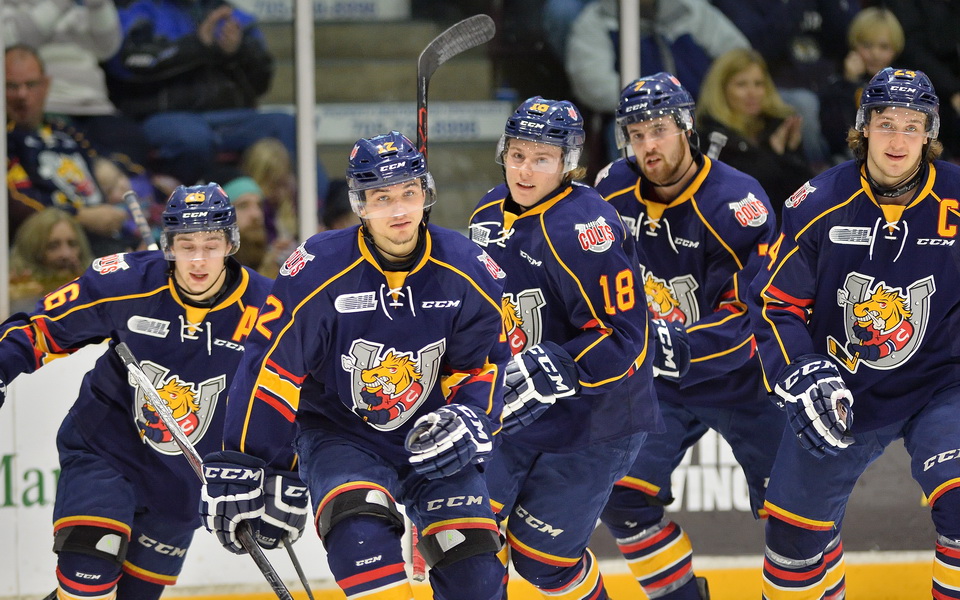 Article Courtesy of the Barrie Examiner. Written by Stephen Sweet.

A matchup between the Barrie Colts and North Bay Battalion usually provides some fireworks.

On Saturday, it was an explosion on the scoreboard as well.

Kevin Labanc tied a franchise record with seven points in a physical, one-sided affair, as the Colts trounced the Battalion 12-2.

“We just caught them off-guard, I guess,” Labanc said. “Our last two games against them were pretty high-scoring games for them and they might have thought it was an easy night.

“We out-battled them for pucks and in front of the net all night.”

In the last meeting between these two teams, the Colts pulled out to an early lead, only to see it evaporate in a defeat.

Naturally, they were determined to build up a much larger advantage this time.

Barrie didn’t take long to get rolling, as Labanc scored on the first shot of the game when put a wrister off of North Bay starter Jake Smith’s blocker and in.

The Colts doubled the lead when their entire top line got involved, with Labanc finding Andrew Mangiapane in front of the net, where his initial attempt was stopped by Smith.

But the rebound came to Justin Scott over by the post, and he had enough time to corral the puck before sliding it in to make it 2-0 Barrie.

“They’ve beat us twice before this season, so we knew we had to keep going,” said Colts defenceman Justin Murray.

North Bay had its share of shots on net, and finally managed to beat Barrie goalie David Ovsjannikov when Brett McKenzie one-timed a quick pass from Mike Baird to cut the deficit to half.

That was as close as the Battalion would get.

For the second game in a row, a Colt scored his first-career OHL goal, as Murray took a pass from Mangiapane and slipped a puck between Smith and the post on the short side.

“The puck was coming up the wall, so I grabbed it, gave it to Mang, and he gave me a great feed back, and I put it on net and it went in,” Murray said.

Barrie would continue to hold the puck in the offensive zone for long stretches and it led to more goals, as Adrian Carbonara banged home a rebound in front of the net to extend the lead to 4-1.

“The fans really kept us in it,” Labanc said. “They helped give us lots of momentum.

“We just wanted to get shots on net and when we got things rolling, we kept our foot on the gas pedal.”

The normally air-tight Battalion were full of holes on Saturday, as Labanc had the time and space to shovel a rebound through the legs of Smith not long after, making it 5-1 Colts.

That was it for Smith, the likely starter for tomorrow afternoon’s rematch, as he was pulled after stopping just 11 of 16 shots and was replaced by Jake Kment.

Things wouldn’t go any better for the backup, as his first shot against was on a partial break by Cordell James, and the Barrie centre slipped the puck under Kment’s leg to give the Colts a 6-1 cushion after just one period.

“Our start was the biggest key,” Murray said. “We all prepared well and after the first period, having a 6-1 lead, we were able to keep building on it.”

The Colts kept things rolling in a wild second period, one that saw Scott get a goal on his first shift and play defence for the last three.

Barrie’s overager was the beneficiary of a clever passing play, and he blasted a shot past Kment to put the Colts up 7-1 just over a minute into the second.

But the other side of this matchup was about to rear its ugly head.

Carbonara was headed through the neutral zone when Zach Shankar lined him up and connected on an open-ice hit.

By virtue of being the second (and third) fight, all four were ejected, leaving Barrie with just four defencemen for the rest of the night.

When Rasmus Andersson got four minutes in penalties late in the frame, Scott agreed to go back on defence, playing alongside Michael Webster, who guided him through a clean remainder of the period.

“It was weird having Scotter on the back end but we only had three guys left, so he helped us out,” Murray said. “He did a good job of it, too.”

Meanwhile, Labanc continued to pile up the points.

He stole a puck near the North Bay blue line and went in, drawing a delayed penalty before wiring a shot off of the post and in to make it 8-1 Barrie.

Labanc earned his sixth point of the night before the period was out, when he intercepted another puck and set up Carbonara for his second goal of the night, giving the Colts a 9-1 cushion after 40 minutes.

“We were out-battling, out-working them to the puck and I was able to steal some passes from them,” Labanc said. “We were really sticking to our structure and they went away from it, so we kept getting chances.”

Barrie hit double digits early in the third, as Labanc got point No. 7 when he set up Mangiapane’s goal.

“I came in with the mentality that we had to get two points,” Labanc said. “I managed to tie the franchise record, which came along with it, but the big job for us was to get the two points, and we got that.”

By this point, the Battalion defence had all but given up on most plays, and that allowed both Zach Magwood and Ben Hawerchuk to take the time they needed in front of the goal to each get a marker.

Offensively, the Colts were able to roll out all four lines for the bulk of the night, leaving them a little more fresh for the upcoming rematch.

The two teams are set to meet Sunday afternoon in North Bay. The Colts return home on Thursday night when they host Mississauga.

COLTS ON THE SCORE SHEET: