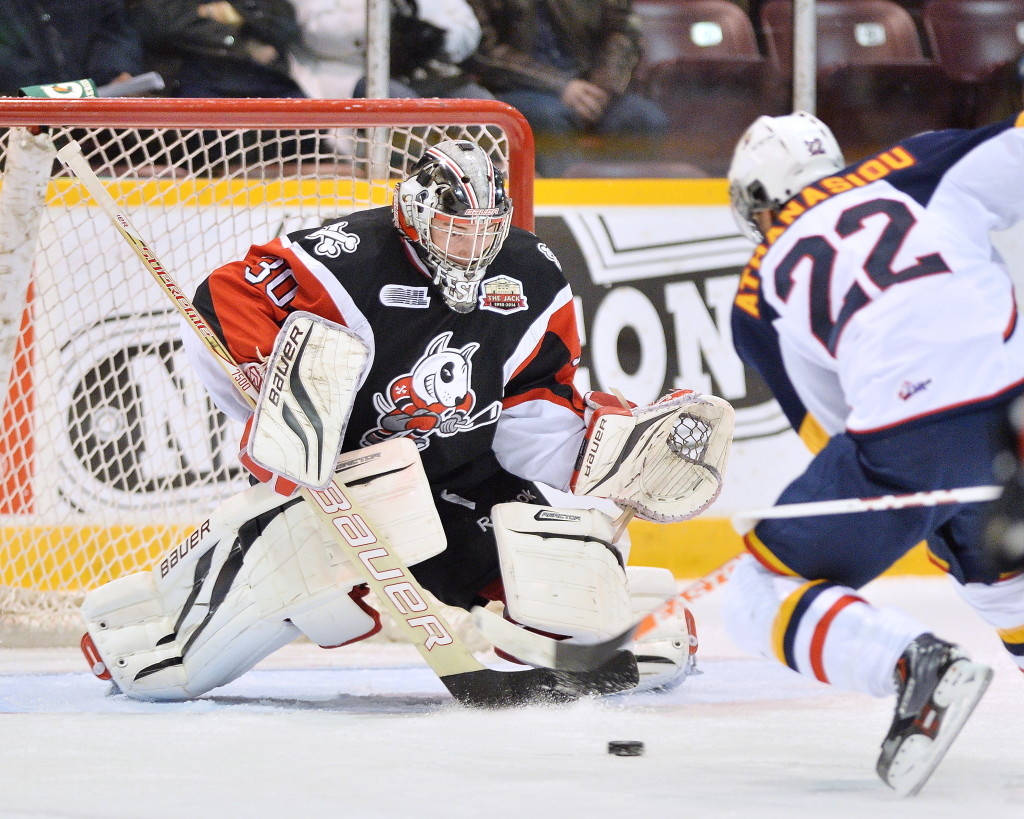 Article courtesy of the Barrie Examiner

If last Saturday was the Aaron Ekblad show, then tonight was the Andreas Athanasiou spectacular.

The Colts leading scorer matched the captain’s single-game goal total from a week ago by notching four of his own in another win.

This time, it helped lead Barrie to a 6-2 victory over the Niagara IceDogs.

“I think we just played a full 60 (minutes),” Athanasiou said. “Our first two periods in North Bay weren’t too good, but we showed how we could play in the third, and we showed that if we play that way the whole game, we can be a (really) good team.”

Before the first period was out, it was clear which team was rebuilding and which was still looking to compete this year.

Niagara didn’t get a shot on goal until almost eight minutes in, when Barrie native Ben Hughes was turned aside by Colts starter Mackenzie Blackwood.

By that point, Barrie had already taken the lead courtesy of Athanasiou, who pulled the puck in to get around a defender and then snapped a shot that dribbled through IceDogs goalie Blake Richard and in.

“His speed kills,” said Colts defenceman C.J. Garcia. “He goes wide, draws everyone to him and he’s a complete player with his back-checking and doing the right things for us.”

The Colts would double their advantage before the period was out thanks to a line of overagers.

Mitchell Theoret sent a pass from the side boards to Tyson Fawcett, who was skating in the former IceDog’s direction.

Fawcett teed up the shot for Zach Hall, who stepped into it and wired one past Richard to give Barrie a 2-0 lead after one period.

Athanasiou turned things up in the second, thanks in part to some well-placed passes.

At the end of a man advantage, Ekblad had to move the puck quickly with Vince Dunn, who had just come out of the box, pursuing him from behind.

So Ekblad found Dotchin, who sent a back-door feed to Athanasiou, and the Red Wing prospect put it off of Richard and in to make it 3-0.