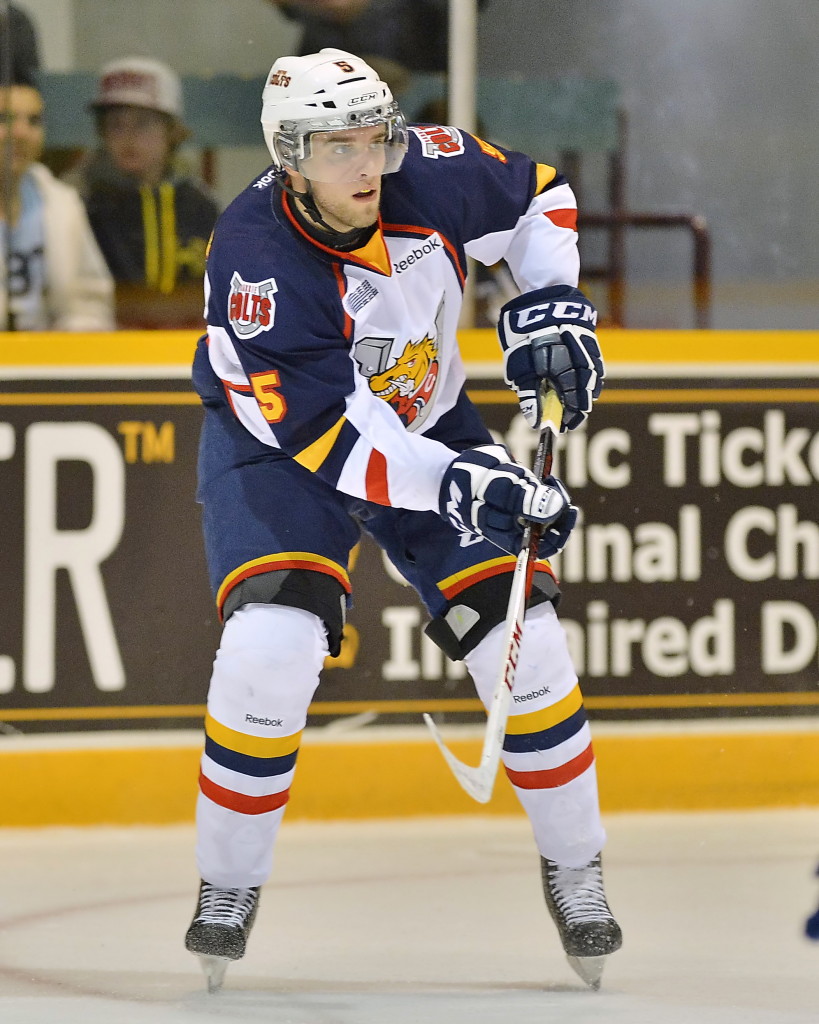 The Barrie Colts headed to Belleville for Game 1 of the Eastern Conference finals after a long layoff since they swept the Oshawa Generals in round 2. The Belleville Bulls would hand Barrie their first loss of the 2013 OHL Playoffs winning 3-2 on Friday night.

Like any team playing on the road you want to score that first goal which Barrie did just 2:54 into the game. Zach Hall notched his 3rd goal of the post season when he banged home the puck on the door step after a cross crease pass from line mate Mark Scheifele. Aaron Ekblad was also credited with an assist. Despite being outshot 16-9 in the first, the Colts would take a 1-0 lead heading into the second period.

Belleville would bring the game to a 1-1 tie at 7:38 of the second period on a tic-tac-toe passing play by the Bulls. Stephan Silas would finish the play with his 4th goal of the playoffs. Midway through the frame Bulls defenseman Jordan Subban would take a slashing penalty giving the Colts a power play opportunity. With the man advantage Aaron Ekblad would blast home his 4th of playoffs from the point to put the Colts back out front 2-1. Zach Hall and Mark Scheifele picked up the assists.

Late in the second period Belleville would once again tie the game back up at 2-2. Austen Brassard would carry the puck out of the corner before driving the net and putting home his first of the game. The goal came at 14:10 with assists going to Jake Cardwell and Alan Quine. The Bulls had the edge in shots 28-19 after forty minutes.

The third period saw both teams’ trade quality scoring chances but Mathias Niederberger and Malcolm Subban stood tall for their respective clubs. Midway through the final frame, Zach Hall found himself on a breakaway but rang it off the iron. With three minutes remaining in the game Barrie would be assessed a holding penalty sending the Bulls on the power play. A shot from the point that missed high over top of the net would bounce right back out front eventually leading to forward Austen Brassard scoring his second of the game. The goal came with just 1:55 left in the third period and it was the first lead the Bulls had on the night.

With the net empty Barrie could not capitalize and suffered their first loss of the post season, 3-2. Mathias Niederberger was outstanding in the cage for the Colts and earned the games 3rd star making 38 saves on the night. Zach Hall, Aaron Ekblad and Mark Scheifele all had two points each in the game. Belleville leads to series 1-0.

The Barrie Colts will look to rebound in Game 2 of the Eastern Conference Finals Saturday April 20th in Belleville. Game time is scheduled for 7:05 at the Yardmen Arena.