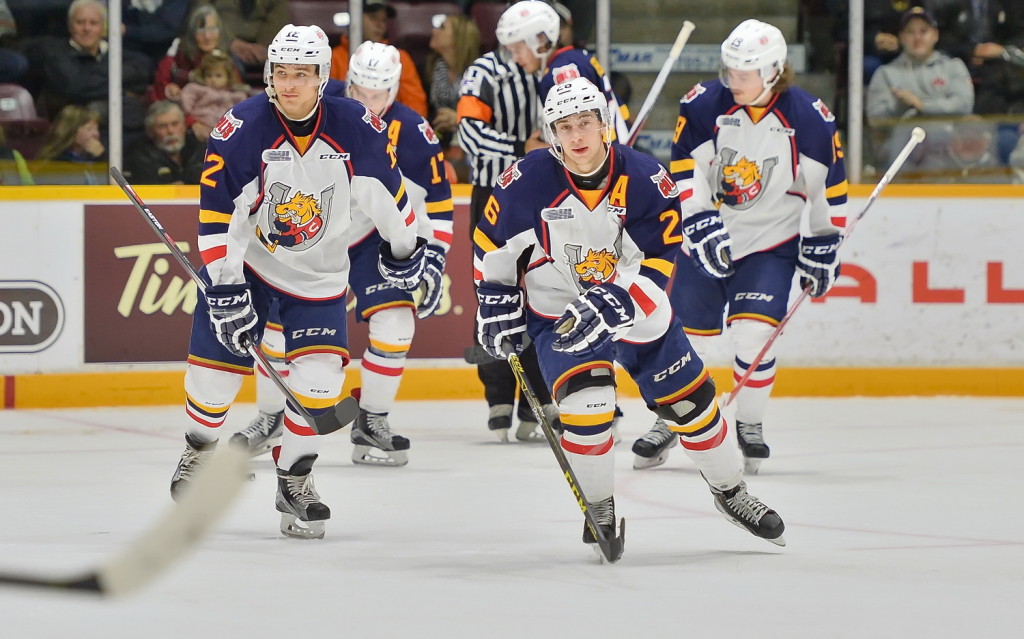 For the first time this season, the Saginaw Spirit visited the Barrie Molson Centre to take on the Colts. The Colts came into Saturday night’s game with an 11-6-0-0 record, while the Spirit entered the game with an 8-9-1-1 record, having dropped their previous two games.

Within a two-minute span in the second period, the Colts were able to grab and extend their lead, leaving the Spirit to play catch up unsuccessfully. The Colts would continue their winnings ways in November, grabbing the 5-1 win over the Spirit. The win would extend the perfect month of November for the Colts.

Andrew Mangiapane had a natural hat trick for the Colts in the win, while Zachary Magwood and Ben Hawerchuk each added goals. Kevin Labanc would record an assist on each of Mangiapane’s goals, executing great passing plays. Rasmus Andersson, Lucas Chiodo, Julius Nattinen, Justin Scott and Michael Webster each grabbed assists.

The Colts would get the goal scoring started midway through the first period when Chiodo crossed the blue line and dropped it to Andersson, who then fired it down to the slot where Magwood would redirect it home. The goal would be Magwood’s second career goal, but his first at the BMC, and gave the Colts a 1-0 lead.

Then, nearly seven minutes into the second period and on a two man advantage power play, the Spirit were able to tie it up. Connor Brown would pick up his 8th goal of the season, with assists going to Devon Paliani and former Colt, Matthew Kreis.

But before the end of the period, the Colts would turn it on and grab three quick goals in less than two minutes.

With the Spirit attempting to clear their zone, Hawerchuk was in the right place above the circles to block the clearing attempt. Hawerchuk cradled the puck and ripped a shot past David Ovsjannikov in goal who wasn’t set, for his fourth of the season. The Colts go-ahead goal was unassisted.

A minute and a half later, Mangiapane would grab his first of three goals on the night. After Labanc entered the zone, he made an incredible backhand pass to Nattinen, who then fired a pass across the slot that Mangiapane buried. Nattinen’s assist would give him a 7-game point streak and would make it 3-1 for the Colts.

It would only take 22 seconds for Mangiapane to find the back of the net again, as Labanc would again set up Mangiapane who put it five-hold to give the Colts a 4-1 lead in a matter of two minutes.

The third would see plenty of back and forth action, with Mackenzie Blackwood, coming off of a Canada Russia Series shut out win, making big saves to ensure the Colts lead.

Mangiapane would finish off the hat trick halfway through the third period. On the power play, the rebound from Webster’s shot would find Mangiapane’s stick and he would make no mistake going top shelf. Labanc also grabbed an assist on the 5-1 goal. The hat trick for Mangiapane would be his second of the season, with his previous one coming less than a month ago in Oshawa.

In goal, New Jersey Devils prospect Blackwood stood tall, stopping 33 of 34 shots that he faced. Meanwhile, Spirit goalie, Ovsjannikov was able to stop 27 of the 32 shots the Colts fired on net.

The Colts went 1 for 3 on their power play opportunities, but did allow the Spirit to grab a power play goal on one of their six chances on the night.

Sunday afternoon the Colts are back in action as they travel to North Bay to face the Battalion. They return to the BMC on Thursday, November 19th to take on the Sudbury Wolves. For tickets to that game, visit the BMC Box Office or www.ticketbreak.com.