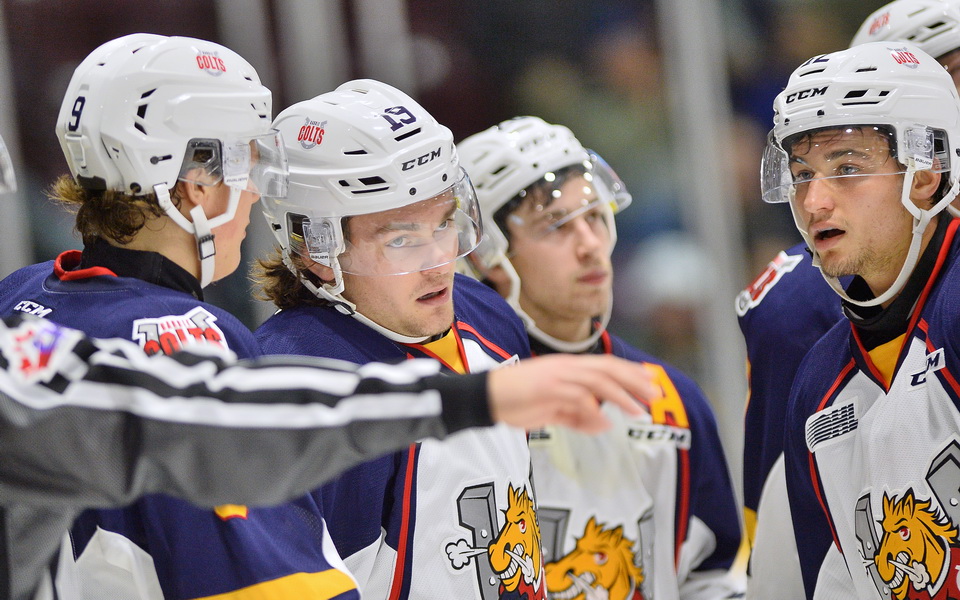 The Colts made their way east to the K-Rock Centre as they squared off against the Kingston Frontenacs in a pivotal match-up as the Fronts led the Colts by just two points for the top spot in the Eastern Conference. Their previous meeting took place on January 23rd where the Fronts topped the Colts in a shootout 6-5. Since then, the Colts have constructed an 8 game win streak, outscoring their opponents 40-18 in that span.

Both teams came flying out of the gates looking to grab the early momentum. While both teams had some great opportunities to notch the early lead, both Mackenzie Blackwood and Frontenacs’ starter Lucas Peressini turned away everything to keep it scoreless.

The Frontenacs would strike first with 3 minutes left in the period as Juho Lammikko picked up a rebound from the side of the Colts’ and banked it off the backside of Blackwood for his 12th of the year. Conor McGlynn and Jacob Paquette drew the assists.

The Fronts would waste little time extending their lead to two as only 11 seconds after Lammikko’s tally, Ryan Cranford would bang the Ted Nichol rebound past a wandering Blackwood for his 10th goal of the year to give Kingston a 2-0 heading into the second.

The second period would see each team score within the first minute of the period as Andrew Mangiapane and Michael Dal Colle found the back of the net.

Mangiapane would score 34 into the frame after a nice give and go play with Julius Nattinen, registering his 40th goal of the season, while Michael Webster had the second assist. Mangiapane becomes the 3rd player in the OHL to reach the 40-goal plateau, joining London’s Christian Dvorak and Erie’s Alex DeBrincat.

Only seventeen seconds later, Kingston would find themselves on a 2-on-1 rush with Spencer Watson feeding Dal Colle, putting it by a stretched out Blackwood for his 26th of the season. Warren Foegele was credited with the second assist.

But, the Colts would cut the Fronts lead and make it 3-2 five minutes into the period as they would convert on the powerplay. After Ryan Verbeek was sent off for high sticking, the Colts’ would work the puck to Kevin Labanc who’s shot was deflect to Andrew Mangiapane who buried the rebound by Peressini for his second of the game and 41st on the season.

Despite the quantity of opportunities coming from the Colts, it would be the Frontenacs who would add goal, making it 4-2. After a questionable icing was waved off, Lawson Crouse would pick the puck up in the corner and set up Juho Lammikko in the slot where he wired the one timer past Blackwood for his second of the contest and 13th of the season.

Like Mangiapane Saturday night against the Guelph Storm, Juho Lammikko would record the hat-trick with a shorthanded tally. After a flurry of chances by the Colts, Lawson Crouse would bring the puck up ice and manoeuvre through a pair of Colts’ defencemen, where a trailing Lammikko would dig away at the loose puck, sliding it under Blackwood for his 14th of the year.

The Colts looked to generate another third period comeback as they trailing 5-2 after forty minutes.

But Kingston would make the Colts’ comeback a little more daunting as Ryan Verbeek would blast a slapshot by Blackwood to make it 6-2 with Roland McKeown recording the lone assist.

The Colts would cut Kingston’s lead back to three on the powerplay as Michael Webster set up Justin Scott who then set up Anthony Stefano. Stefano made no mistake and fired a wrist shot past Peressini for his 17th goal of the year.

With over 7 minutes left in the game, the Colts would inch closer to completing the comeback as Kevin Labanc would pick the corner on Peressini, as he sniped his 34th goal of the year and league leading 103rd point, cutting Kingston’s lead to 6-4. Mangiapane and Justin Murray recorded assists on Labanc’s marker.

The Colts’ would have countless quality scoring chances in hopes of coming back but Lucas Peressini shut the door the rest of the way as he stopped 50 of 54 Barrie shots to help the Frontenacs to the 6-4 win. With the win, Kingston moves 4 points ahead of Barrie for the top seed in the Eastern Conference.

The Colts will be in London Friday night to take on the Knights’ before return back to town to square off against the Oshawa Generals on Saturday, February 20th. Get your tickets now by visiting BMC Box Office or going to www.ticketbreak.com.