Colts Fall On the Road to Storm 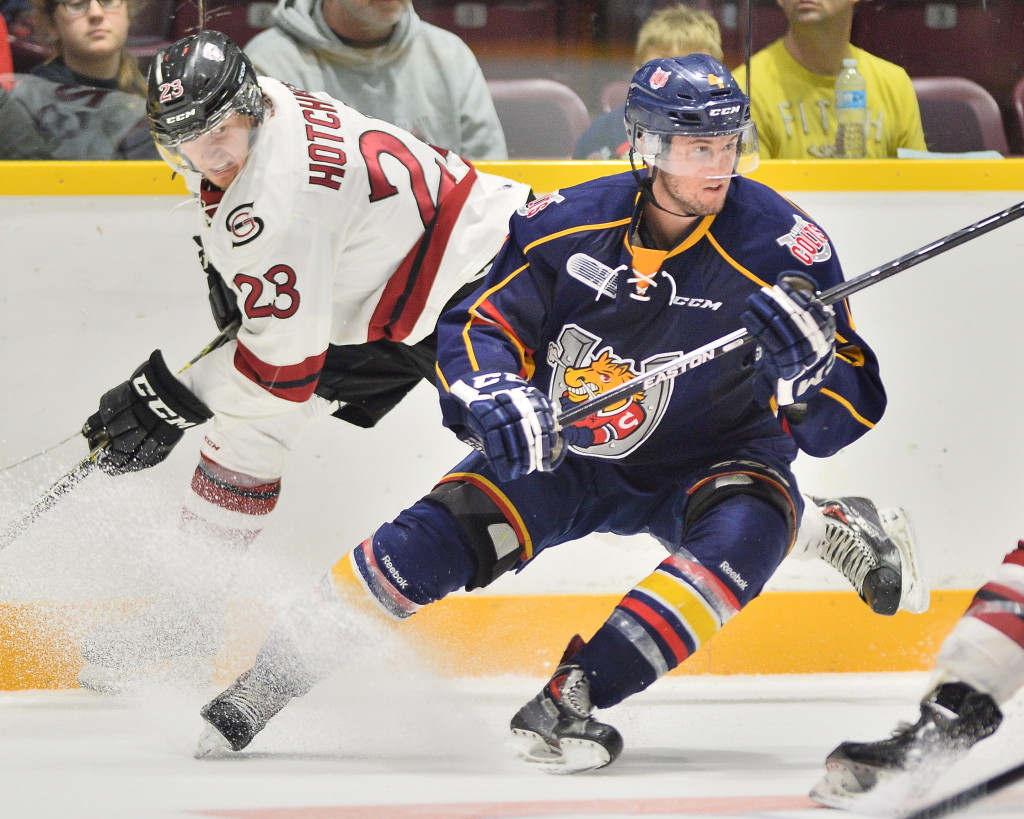 Friday night’s game would see the Colts grab an early lead, but they would be unable to hold on. The Storm battled back with four straight goals before the Colts could answer late in the third. They wouldn’t be able to put together a comeback, and ultimately fell to the Storm 5-4.

Kevin Labanc and Kody Gagnon would record the goals for the Colts, while Andrew Mangiapane, Rasmus Andersson, Giordano Finoro and Lucas Chiodo would tally the assists on the night.

The first period would be a back and forth between both teams. The Colts would get on the board first with a power play goal from Labanc. 11:35 into the period, Andersson would get the puck to Mangiapane who was to the left of Guelph’s netminder, Michael Giugovaz. Mangiapane then went across the crease to Labanc, who in turn made no mistake and buried his 25th goal of the season, giving the Colts a 1-0 lead.

Before the end of the period though, the Storm would tie the game. With less than three minutes to play and shorthanded, James McEwan would break up a Colts pass in the Storm end, and spring himself on a rush. McEwan would win the foot race, and fire a slap shot past Ovsjannikov for his team leading 17th goal of the season.

At the end of the first period, the Colts outshot the Storm 18-8.

Midway through the second period, the Storm would grab their first lead of the game. Garrett McFadden scored his 6th goal of the season, with assists going to Jacob Harris and James McEwan.

McFadden’s second period goal would be the only goal of the period, allowing the Storm to carry their lead into the third.

The Storm would extend their lead early in the third period when Jacob Harris found the back of the net. Harris tapped home a pass from Givani Smith to give the Storm a 3-1 lead.

Only a few minutes later the Colts would come close when Roy Radke broke in and fired a shot that nearly beat Giugovaz. Cordell James followed up and nearly put home the rebound, but it didn’t reach the net.

Cordell James and Roy Radke nearly scored with nearly 15 minutes to play. After Radke broke into the zone and fired the puck on net, James nearly had the rebound, but put the shot wide.

Then, with 3:05 remaining in the game and the Colts net empty, Gagnon fired a shot from the point to score his first goal of the season. After missing the majority of the first half of the season due to injury, Gagnon scored a key goal in only his third game back. Finoro and Chiodo assisted on the goal to make it 4-2.

But with under a minute to go, Givani Smith scored an empty net goal for his second goal of the game, making it 5-2.

Despite outshooting the Storm 37-24, through three periods, the Colts were unable to battle back after giving up four straight goals to the Storm.

The Colts went 1 for 3 on their power play chances on the night, while allowing the Storm to go 1 for 5 on their chances.

Labanc, Mangiapane and Andersson each extended their respective point streaks in the loss. Labanc has now recorded 15 points in four games, and having recorded a point in his last 7 games. Mangiapane’s assist extends his point streak to 5 games, while Andersson’s assist is his second game in row recording a point. Andersson also recorded a point in all but one of the Colts last 12 games.

The Colts finish off their three-in-three weekend Saturday night back at home when they welcome the Windsor Spitfires to the BMC. For tickets to that game, visit the BMC Box Office or www.ticketbreak.com.