Colts End 2015 with Win Against Wolves 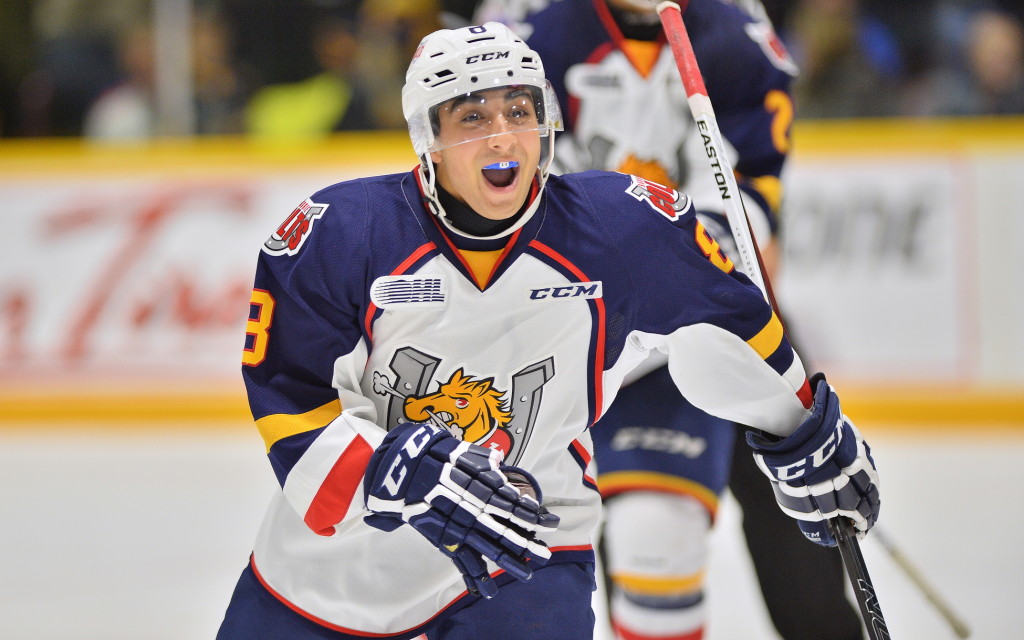 The Barrie Colts are entering the new year with momentum.

That’s thanks in large part to the work by their rookies.

Aidan Brown and Giordano Finoro scored their first-ever Ontario Hockey League goals and Lucas Chiodo had a career-best three assists to lead the Colts to a 6-3 victory over the Sudbury Wolves in their annual New Year’s Eve game Thursday night.

“We played our game and really beared down,” Brown said. “We knew coming in that it would be tough and physical, and we’ve got a pretty good rivalry with them.

“We knew that if we played our game, we would be successful.”

The two teams had combined for 73 penalty minutes and eight ejections in their last meeting, but it was the offence that took centre stage, thanks in large part to poor defensive play.

Barrie outshot Sudbury 6-1 in the early going, but the Wolves were the ones to get on the board first, as Dmitry Sokolov was wide open in the high slot and wired a shot off of the crossbar and past Colts starter David Ovsjannikov.

The Colts wouldn’t take too long to even things up though, as Roy Radke came out from the side boards with virtually no resistance, and blasted an attempt by Sudbury goalie Zach Bowman to tie things up at 1-1.

As a young team, the Wolves still appeared to be prone to mistakes, and they committed a big one on the second goal.

David Wilkie made a soft pass in front of his own goal to his defensive partner, and Kevin Labanc jumped on it before quickly snapping a shot through Bowman’s five-hole to give Barrie the lead.

“I think we’re very skilled on the front end,” Finoro said. “We proved that all lines can score, and that helps a lot.”

Even the rookies were getting in on things for the Colts.

After Rocky Kaura’s point shot hit the back boards and came out to the other side, Brown got to the puck and stuffed it past an outstretched Bowman on the near side for his first-career Ontario Hockey League goal, giving Barrie a 3-1 advantage after 20 minutes.

“I saw the puck come off of the boards and I know they’re pretty bouncy, so it came right to me,” Brown said. “I missed that first chance but the second one, I beared down and got it in.

“Right away, I froze,” added Brown with a big smile. “It was good and amazing, and I want to put more in now.”

Spaces remained wide open in the second period, and the Colts continued to get great scoring opportunities.

Radke sent a pass diagonally across the length of the neutral zone, and it went cleanly through before being picked up by Anthony Stefano, who went in alone and beat Bowman high over the glove, making it 4-1 Barrie.

With the ability to break off clear chances, the Colts got a little too cute at times.

Josh Carrick made another cross-ice pass to Labanc while a man down and the American went in alone, made a move, and dropped a no-look pass that didn’t find anyone other than a Wolves defenceman.

Sudbury would cut the lead before the second period was out, as Danny Desrochers took a shot that hit a stick as he released it and slipped through the legs of Ovsjannikov, reducing the Barrie lead to 4-2.

The Wolves would continue to direct shots at the Barrie net in the third, with Alan Lyszczarcyk getting a pass in a great area, but Ovsjannikov moved across quickly with the right pad to deny the attempt.

“Our goalie played great, there’s no doubt about it,” said Brown of Ovsjannikov. “We just tried to do whatever we could to help him out.”

Barrie would get another first in the third, as Finoro got goal No. 1 in the OHL when he chipped a Chiodo pass over the shoulder of Bowman to make it 5-2 Colts.

“(Chiodo) is a very skilled player, and he’s very good at finding people, so I just tried to get to an open spot,” Finoro said. “When he dished it across, I saw the goalie read it very well, so I knew I had to get it up very quick.

“I was able to get it up over his shoulder,” Finoro added. “It was a huge weight off of my shoulders.”

Sudbury wasn’t finished yet, though, and it scored its third power-play goal of the night as Lyszczarczyk banged home a rebound in front.

The Colts would restore their three-goal cushion on a man advantage of their own, when Andrew Mangiapane whacked home an attempt that had been slowed down by the stick of a Sudbury defender.

The Colts begin 2016 with a home and home with the North Bay Battalion on Saturday, January 2nd and Sunday, January 3rd. For tickets to those games, visit the BMC Box Office or click here.