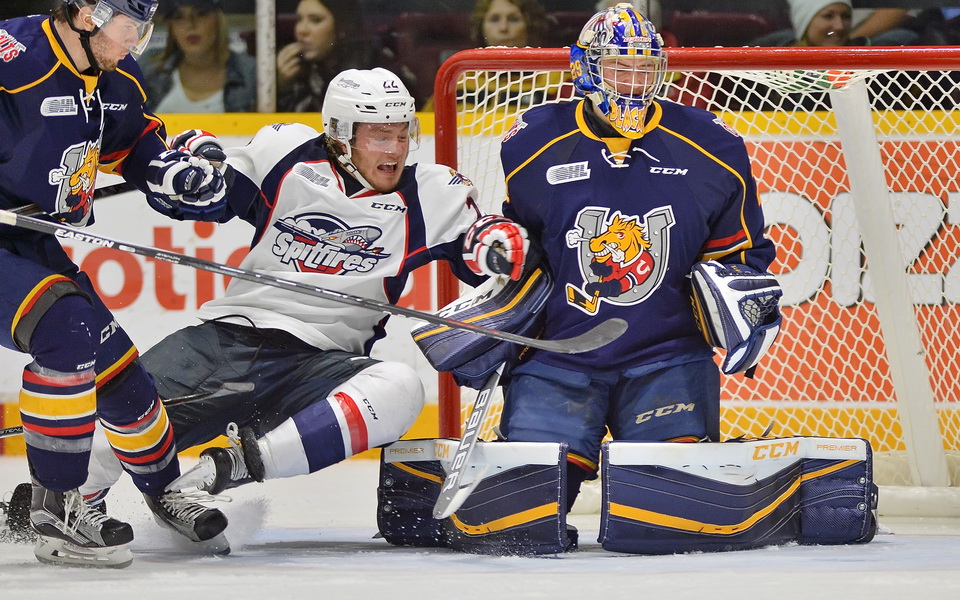 For the first and only time this season, the Barrie Colts welcomed the Windsor Spitfires to the Barrie Molson Centre. Saturday night’s meeting was the first between the two teams this season, with their second coming late in February.

After being down 1-0 through the first period, the Colts battled back to score two second period goals, before scoring an empty net goal in the third period to seal the deal and win 3-1. Andrew Mangiapane, Roy Radke and Kevin Labanc scored for the Colts in the win. Labanc also tallied an assist, while Rasmus Andersson recorded two assists and Anthony Stefano recorded one.  In goal, playing in his second game after returning from the World Junior Championship, Mackenzie Blackwood stood strong and stopped 32 of the 33 shots he faced.

Through a gritty first period that saw the Spitfires outshoot the Colts 12 to 8, it was the Spitfires who would get on the board first. Just over 6 minutes into the period and on the power play, the Spits would grab the lead when Connor Chatham potted home his 12th goal of the season. Chatham’s goal would mark his first as a Spitfire after being traded from Flint. Chatham came off the face off dot and ripped a shot top shelf giving the Spitfires a 1-0 lead.

The second period though would see the Colts fight back and put two goals up on the board. Nearly two minutes into the period, the Colts would find themselves on the power play. After Andersson got the puck down to Labanc on the sideboards, Labanc fed Mangiapane in the slot. Mangiapane stopped the pass off of his skate, brought it to his stick, and then fired a shot that beat Spits goalie, Mario Culina. Mangiapane’s 20th goal of the season would tie the game 1-1.

Nearly three minutes later, the Colts would take the lead. Stefano was rushing down the left side and had Radke breaking hard to the net. Stefano perfectly placed his pass towards the net, allowing Radke to redirect it home. Andersson also assisted on Radke’s 15th goal of the season, making it 2-1.

Despite plenty of chances coming from both ends, neither team would be able to capitalize on their chances in the remainder of the second period. The Spitfires fired a few shots off the post, while the Colts also hit the post on a number of occasions.

The third period would be much of the same back and forth, gritty action that fans were treated to in the first two periods. In the last minute, the Spitfires would pull their goalie for the extra attacker, but it would be the Colts who would benefit from that. With 31 seconds to play, Labanc intercepted the puck in the Colts zone, and carried it past the red line before firing home his 26th goal of the season for an empty net goal.

In the 3-1 win, the Colts went 1 for 3 on their power play opportunities, and only gave up one shorthanded goal on seven Spitfire power plays. The Spitfires gave Blackwood a busy night, forcing him to come up with big saves on his 33 shots faced. Meanwhile, the Culina stopped 17 of the 19 shots that he faced from the Colts.

The Colts are back in action next weekend for their second straight three-in-three. Thursday night they travel to Erie to take on the number 1 ranked Otters, then head to Hamilton to take on the Bulldogs. They return home on Saturday night to take on the North Bay Battalion for a big divisional matchup. For tickets to that game, visit the BMC Box Office or www.ticketbreak.com.