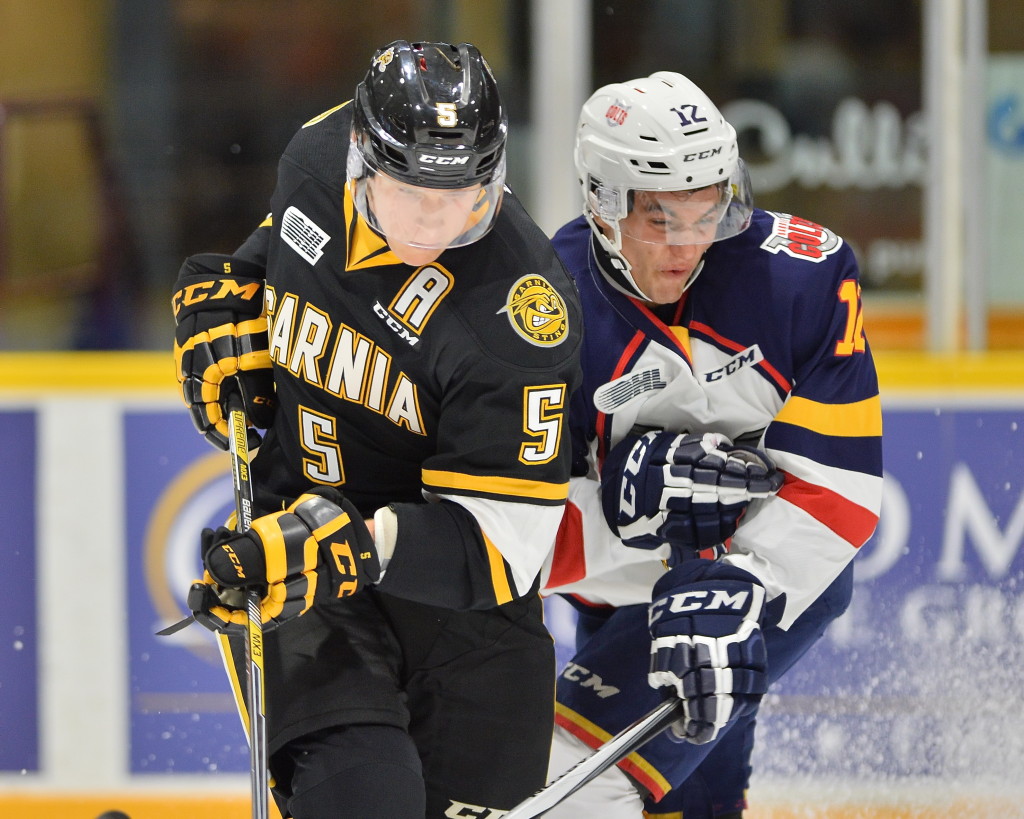 Following their 4-2 loss to Windsor Thursday night, the Colts looked to get back in the win column Friday night as they visited the Sarnia Sting. Coming into Friday night’s action, the team looked to make up ground on the Kingston who remains six points ahead of the Colts for top spot in the Eastern Conference.

The game wouldn’t start off the way the Colts planned as Sarnia would take the early lead when Travis Konency found the back of the net just four minutes into the game. The goal was Konecny’s 24th of the season as Jakob Chychrun and Troy Lajeunesse drew the assists.

Minutes after scoring the opening goal, the Sting would make it 2-0 as Devon Paliani would fire a wrist shot from the face-off dot past Mackenzie Blackwood for his 6th goal of the season as Jakob Chychrun and Brandon Lindberg were credited with the helpers.

The Colts would trail the Sting 2-0 after the first, with Sarnia leading Barrie 14-7 in shots.

At the five-minute mark of the second, the Colts would cut Sarnia’s lead to 2-1 as Andrew Mangiapane potted his 43rd goal of the year by Charlie Graham. After taking a stretch pass from Kevin Labanc, Mangiapane would fight off a Sting defenceman before firing a backhand by Graham as Julius Nattinen was given the secondary assist.

But with over 8 minutes remaining in the period, Sarnia would regain their two goal lead. After going around Michael Webster, Anthony Salinitri would find himself in the midst of a 3 on 1 where he would keep it and squeak in through Blackwood to give the Sting the 3-1 lead. Salinitri’s goal was his 10th of the year as the goal was unassisted.

With five minutes to go in the frame, Barrie would again cut Sarnia’s lead to one as the league’s 6th best power play would go to work. Following Noah Bushnell’s minor for hooking, Dylan Sadowy would be in the right place at the right time as he buried the Kevin Labanc rebound into a yawning cage for his 36th of the season, with Rasmus Andersson also collecting an assist. The goal was Sadowy’s 16th in 18 games with the Colts.

As the period began to wind down, Sarnia would score twice to give themselves a three goal lead going into the third.

The first would come off the stick of Brandon Lindberg. As the Sting broke into the Colts’ zone, Jakob Chychrun would sent a shot on net where a streaking Lindberg picked up the rebound and finished off the rush for his 8th of the year as Devon Salinitri would also be rewarded with a helper.

The second would come with 47 seconds left in the period as Travis Konecny would make a nice move to get into the Colts’ zone before wiring a wrist shot under the blocker of Blackwood for his second of the game and 25th of the season. Nikita Korostelev received the lone assist.

The Colts entered the third with the hopes generating another three-goal comeback like the one they had conducted against Hamilton earlier in the month. However, Charlie Graham and the Sting defence had other plans as they kept the Colts’ scoring opportunity to a minimum.

Halfway through the period, Sarnia would make it 6-2. After Andrew Mangiapane was sent off for delay of game, Jeff King would go top shelf on Blackwood for his 5th of the season as Jakob Chychrun would pick up his fourth assist of the game while Travis Konecny was given the second assist.

The Sting would shut the door on a comeback as Charlie Graham stopped 29 of 31 to help Sarnia claim the 6-2 victory. The next home game will take place tomorrow night as the Colts host the Mississauga Steelheads. Get your tickets now by visiting BMC Box Office or going to www.ticketbreak.com.