Colts Down Wolves 6-4 in Chippy Affair 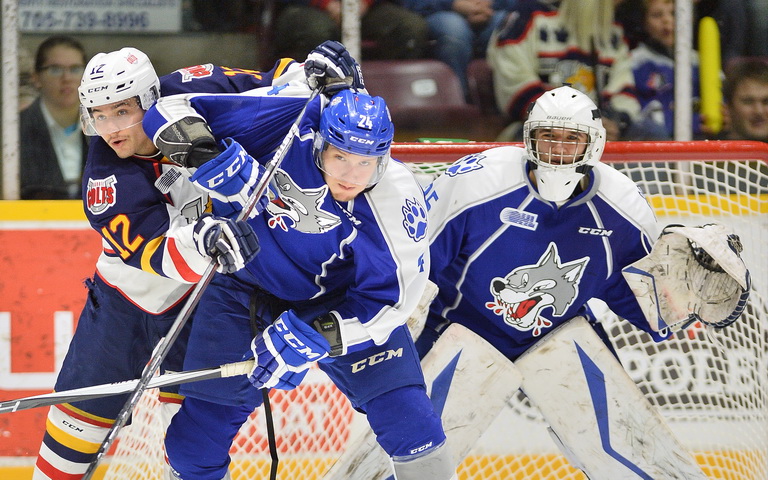 For the fourth time this season, the Colts and Wolves took to the ice in a less than friendly matchup. Friday night would once again have the same outcome as the previous three meetings, with the Colts finding a way to win, despite giving up three power play goals to the Wolves.

With a busy second period where eight goals were exchanged, the Colts came out on top with a 6-4 win. Brendan Lemieux had two goals and an assist in the contest and Cordell James also had two goals. Kevin Labanc scored his 13th goal of the season and added an assist in the win. Meanwhile, Adrian Carbonara notched his first goal of the season and Justin Scott and Julius Nattinen each had a pair of assists. Josh Carrick, Lucas Chiodo and Roy Radke also added assists en route to the Colts 17th win of the season.

It didn’t take long for the Colts to get on the board and take the lead as only 3:47 into the first period, Lemieux tallied his 8th goal of the season. Nattinen had the only assist on the goal that extended Lemieux’s point streak to 7 games in only 10 games played this season.

The first period would end though solidifying the rivalry that has developed between the two teams. After some contact in front of the net, Blackwood ultimately didn’t finish the period as he was awarded a match penalty for a deliberate attempt to injure. Rookie Ruan Badenhorst replaced him in goal for the remainder of the game.

Going into the second period with a five-minute penalty to kill off, the Colts found themselves trailing for the first time all season against the Wolves. Before the first five minutes in the second period, the Colts gave up two power play goals to the Wolves, with Dimitry Sokolov finding the back of the net both times. Kyle Capobianco and Mikkel Aagaard assisted on the Wolves first goal, and Michael Pezzetta and Patrick Murphy assisted on the second goal.

But just over halfway through the period, the Colts tied it back up when Carbonara potted his first of the season. Chiodo and Carrick assisted the tying Colts goal.

With less than four minutes to play in the second period, there would be a firestorm of goals.

On the power play with 3:52 to go, Labanc and Nattinen’s set up Lemieux for his second goal of the game to give the Colts a 3-2 lead. Only 31 seconds later, the Colts extended their lead to 2 goals when James snagged his 9th goal of the season. Scott and Radke assisted on the Colts 4th goal.

The Wolves would come back with a goal of their own with 2:20 to play when Matt Schmalz scored his 4th of the season, with assists going to Danny Desrochers and Zach Wilkie.

Then, with 43 seconds to play and short handed, Labanc would score the Colts 7th short-handed goal of the season to make it a 5-3 game. But the Colts wouldn’t be able to escape the second period with a two-goal lead, as the Wolves would ultimately make good on their power play chance. With 15 seconds remaining in the period, Schmalz was back at it when he buried his second of the game, with Desrochers and Wilkie assisting again.

Again though, the period would end with some nastiness. A line brawl erupted at the end of the period, causing a total of 15 infractions to be handed out.

The third period would see plenty of back and forth action with no love lost between the two teams. Neither team would be able to capitalize throughout the period, until the Wolves pulled their goalie and James put home an empty net goal to seal the deal. Lemieux and Scott assisted on the empty net goal to make it a 6-4 final for the Colts.

The Colts league leading penalty kill took a slight hit tonight as they gave up 3 power play goals on 8 opportunities for the Wolves. On the opposite end, the Colts power play was able to capitalize once on their 6 chances.

In goal, Badenhorst is credited with the win, marking his first win of the season. He stopped 15 of the 19 shots he faced through 40 minutes. Prior to being ejected from the game, Blackwood stopped all 18 shots that he faced in just under 20 minutes played.

The Colts are back on the road Sunday afternoon when they take on the Mississauga Steelheads at 2pm. On Thursday, December 10th, the Colts return to the Barrie Molson Centre to take on the London Knights. For tickets to that game, please visit the BMC Box Office or www.ticketbreak.com.