Colts Consistent in 5-1 Win Over Bulldogs 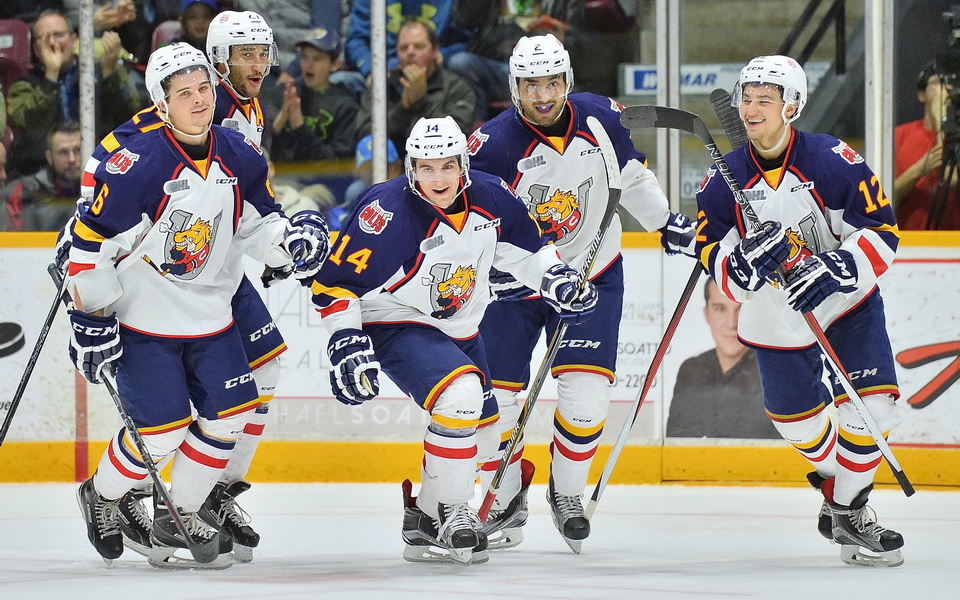 For the first time this season, the Colts welcomed the Hamilton Bulldogs to the Barrie Molson Centre. After meeting earlier in the season in Hamilton, the Colts were looking to finish with a different result than the previous encounter. Back on October 31st, the Colts efforts at a third period comeback fell short when they lost 6-5 to the Bulldogs.

Luckily, Saturday night would be a different story.

After coming off a loss to the London Knights on Thursday night, the Colts were looking to rebound against a Bulldogs team that had earned at least one point in their last five games.

The Colts got off to a quick start, scoring the lone first period goal, before burying four more goals throughout the game en route to a 5-1 victory.

Adrian Carbonara scored his fourth goal in as many games, while Zachary Magwood also added a goal of his own. Kevin Labanc had a goal and two assists, while Justin Scott and Anthony Stefano each added a goal and an assist. With two assists on the night, Cordell James now has 60 career OHL points. Rasmus Andersson, Justin Murray, and Ben Hawerchuk each finished the night with an assist, and Giordano Finoro snagged his first point in the OHL with an assist.

Just 4:19 into the first period, Carbonara opened up the scoring for the Colts when he put home a feed from Andersson. After Scott got the puck to Andersson, Andersson broke down the right side and fed a cross-ice pass to Carbonara who one-timed it past Bulldogs netminder, Connor Hicks. The goal would go under review, but would be deemed a good goal.

Then, just over eight minutes into the second period and on the power play, the Colts would capitalize again. With the whole line getting involved with great passing, Scott finished the play off when he buried a cross-ice pass from Labanc. Murray also assisted on the goal to make it 2-0 for the Colts.

The Colts followed up with another second period goal with nearly six minutes to go in the period. Newly acquired Colt, Stefano, broke into the Bulldogs zone, then dropped the puck to James, who in turn fed Labanc in the slot. Labanc showed tremendous patience as he pulled off a slick fake and buried his 14th of the season.

Starting the third period with a 3-0 lead, the Bulldogs were able to break the donut on the board when Matt Luff beat Ruan Badenhorst for his eight goal of the season. Trent Fox and Jesse Saban assisted on the 3-1 goal.

The Colts shut down all Bulldogs momentum though only a minute and a half later when Magwood found the back of the net on a give-and-go play with Hawerchuk. Finoro would also assist Magwood’s third goal of the season. Then, 17 seconds later, the Colts scored again when James came out of the corner and made a pass to Labanc. Labanc, who could have shot, opted to do a behind the back pass to Stefano, and Stefano sniped his first goal as a Colt, but sixth of the season to give the Colts a 5-1 lead.

In goal for the Colts, Badenhorst would face 37 shots, stopping 38 of them. The win would be Badenhorst’s second of the season, but first win while playing all 60 minutes. For special teams, the Colts forced the Bulldogs to go 0 for 6 on their power play chances, while making good themselves on one of their five chances.

The Colts are back at it next Wednesday, December 16th when they travel to Owen Sound for a 7pm start. The following day, December 17th, the Colts return to the BMC for their Teddy Bear Toss night when they face the Sault Ste. Marie Greyhounds. For tickets to that game, please visit the BMC Box Office or www.ticketbreak.com.

Thursday Highlights: Night of firsts in Barrie
8 hours ago