Colts Come Up Short In Hamilton 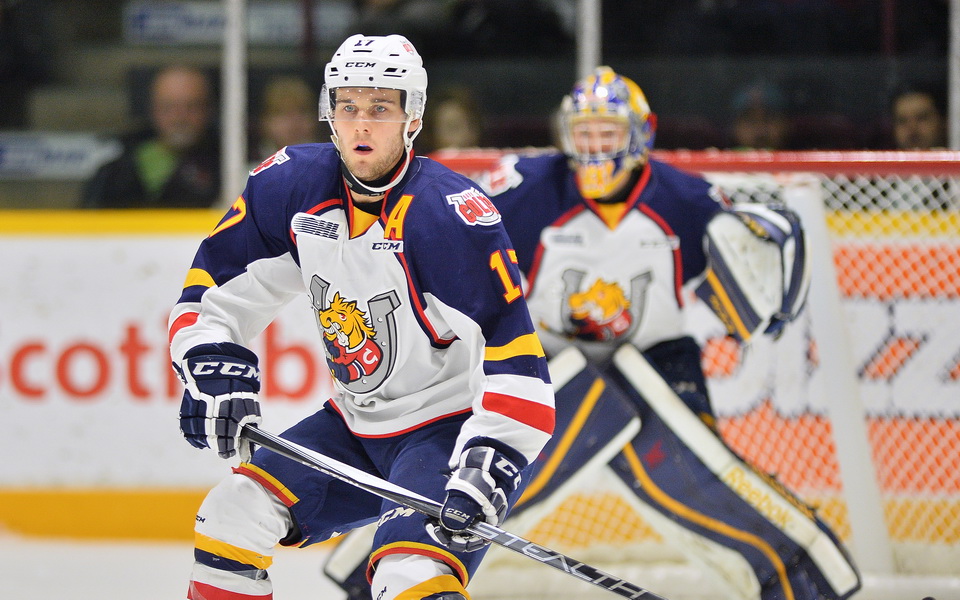 The previous time the Colts entered the First Ontario Centre, things didn’t go as planned. After finding themselves down early, the Colts battled back but fell short as they dropped the game 6-5 to the Bulldogs back on Halloween. Friday night would once again see a close but exciting game, where the Colts found themselves down three goals early, but continuously battling back. As if it was a déjà vu, the Colts would once again fall, this time with a score of 6-4.

The Colts valiant effort in the second period saw the momentum swing their way, but they couldn’t battle back after going down three goals early in the game. In the loss, Justin Scott recorded two goals, along with Dylan Sadowy who recorded his 1st goal as a Colt, and Andrew Mangiapane who also tallied a goal. Rasmus Andersson recorded an assist on 3 of the 4 Colts goals, while also surpassing the 100 career point mark. Michael Webster and Kevin Labanc each notched two assists, while Anthony Stefano had one assist.

In goal for the Colts, David Ovsjannikov played the 1st period, but was then replaced by Mackenzie Blackwood. However, Blackwood wouldn’t finish the game, and played only 5:25 minutes in the third period before Ovsjannikov finished the game.

The Bulldogs would open the game and get on the board quickly with two goals before the five-minute mark of the period.

Only 2:24 into the game, MacKenzie Entwistle buried his second goal of the season to give the Bulldogs a 1-0 lead. After Cole Candella’s fired a shot from the point, it was blocked in the slot and Entwistle found the rebound, beating Ovsjannikov.

Then, less than 2 minutes later, the Bulldgos extended their lead when they were on the power play. With the Bulldgos were applying pressure, they worked the puck around with smooth passing and Brandon Saigeon ended up ripping it over Ovsjannikov’s shoulder for his third goal of the season. Michael Cramarossa and Benjamin Gleason assisted on the 2-0 power play goal.

In the last three minutes, the both teams would exchange goals as the Bulldogs took a three-goal lead before the Colts would score a goal of their own.

With 2:26 left in the first, Luke Kutkevicius found the back of the net for his third goal of the season, with assists going to Jack Hidi and MacKenzie Entwistle. Then, with only 43 seconds to play, the Colts scored their own. After Andersson got the puck to Webster on the point, Webster threw the puck on net and Scott redirected it home for his first of the game to make it 3-1 heading into the intermission.

The second period would see things turn in favour of the Colts. 6:42 into the period and on the power play, the Colts were hemming the Bulldogs in their end.

It was only a matter of time before they scored a goal, and it would be Sadowy who would do just that. Labanc faked around a Bulldogs defencemen, then ripped a shot on goal. After the puck took a high bounce, Sadowy found it in the crease and put it home for his first goal as a Colt, 21st of the season. Andersson also assisted on the goal, cutting the Bulldogs lead to 1 goal.

But, only three minutes later and again on the power play, the Bulldogs would get the best of Blackwood as Matthew Strome would score his 6th goal of the season, making it 4-2. Connor Walters and Cole Candella assisted on Strome’s power play goal.

Despite a plethora of chances and throwing 17 shots on net in the second period, the Colts couldn’t beat Connor Hicks in goal for the Bulldogs for the remainder of the period. That also included the Colts hitting three crossbars in the period.

Coming into the third period, the Colts held the momentum, but only 3:22 in, the Bulldogs would regain a two-goal lead when Matt Luff squeaked home a wrap around. Luff’s 10th goal of the season made it 5-3, while Connor Walters also tallied an assist. After that Bulldogs goal, Blackwood would receive a game misconduct for shooting the puck out, and once again Ovsjannikov would return to the Colts goal.

Less than three minutes later though, the Colts would once again cut the lead to one when Mangiapane snuck one past Connor Hicks for his 21st goal of the season. Labanc and Andersson tallied the assists on the goal that made it 5-4.

But, for the third time in the game, the Bulldogs extended their lead to two goals. Near the 12-minute mark, Michael Cramaraossa walked through the slot and fired a shot past Ovsjannikov, making it 6-4 for the Bulldogs. Trent Fox also assisted on Cramarossa’s 11th goal of the season.

With time running out, the Colts pulled Ovsjannikov for the extra attacker, but weren’t able to claw back. The closest they would come was as time expired when Mangiapane beat Hicks, but it was disallowed and the game was called.

In the loss, the Colts outshot the Bulldogs 37 to 22. The Bulldogs were 50% on the power play, scoring on 2 of their 4 opportunities, while the Colts went 2 for 8 on their power play chances.

After Friday night’s loss to the Bulldog’s, the Colts drop two straight games, but are back in action at the BMC Saturday night when they host the North Bay Battalion for a 7:30pm puck drop. For tickets to the game, visit the BMC Box Office or www.ticketbreak.com.