Colts Come Back to Beat Bulldogs in Wild Game 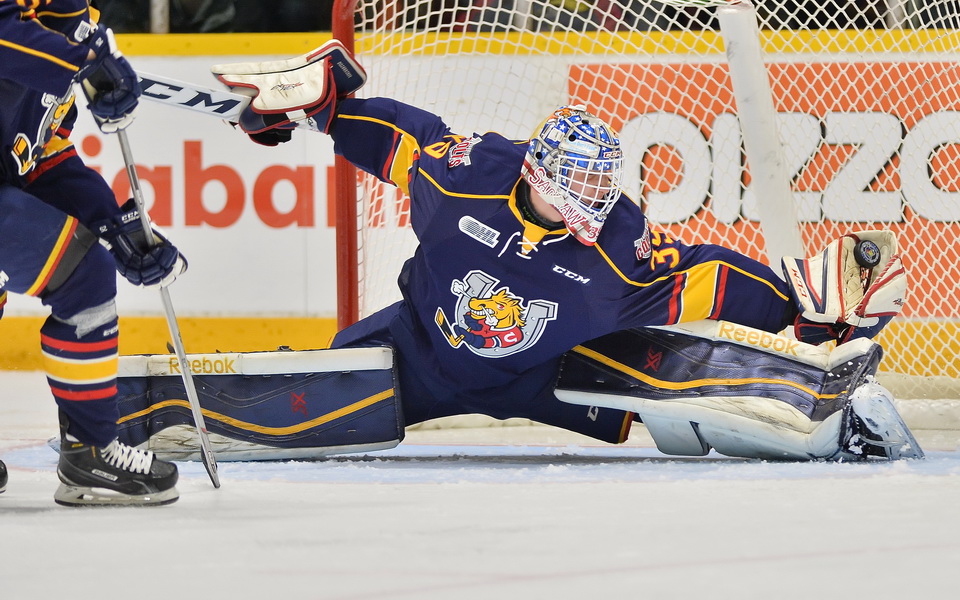 The Colts welcomed the Hamilton Bulldogs to the Barrie Molson Centre for a Thursday night matchup as they looked to extend their winning streak to seven games. The Colts looked to exact some revenge from their last meeting on January 15th where they loss 6-4.

The Bulldogs would take the early just 5 minutes into the game as Niki Petti would pick up the loose puck in front of Mackenzie Blackwood and shovel a backhand past him for his 18th goal of the season. Benjamin Gleason and Matt Luff were credited with the assists on the goal.

Moments after Petti, the Colts looked like they had tied it up as Dylan Sadowy deflected a point shot by Hamilton starter Kaden Fulcher. However, after a lengthy review, the goal would be disallowed as Sadowy touched the puck with a high stick.

That would prove costly for the Colts as Hamilton would take a 2-0 lead halfway through the frame. After a two on one between Gleason and Luff was broken up by a Colts’ defender, a trailing Matthew Strome would pick up the puck and fire it by a sprawled out Blackwood. The goal was the rookie’s 9th of the year with Gleason and Luff recording their second assists of the contest.

Another Hamilton odd man rush would result in the Bulldogs extending their lead to 3-0 as Joseph Mizzi would keep the puck and pick the top corner on Blackwood as the tally would be his 2nd of the year as Ondrej Kachyna and Mackenzie Entwistle pick up the assists.

But, the Colts would score back-to-back goals before the end of the period, entering the second down 3-2. After Michael Cramarossa was sent off for tripping, it would take the Colts just 5 seconds to capitalize as Kevin Labanc would set up Dylan Sadowy in the slot as he buried the one-timer past Fulcher for his 33rd goal of the year.

The Colts would strike again just 18 seconds after Sadowy’s tally on another nice passing play. This time, it was Rasmus Andersson doing the dishing as he fed Andrew Mangiapane goal side as he made no mistake, firing it back Fulcher for his 35th goal of the season.

The Colts would tie it up in the second as Anthony Stefano would take a Cordell James feed in the slot and rip it past Fulcher for his 15th goal of the year as Roy Radke would draw the other assist on Stefano’s marker.

As the period began to wind down, the Bulldogs would go on an offensive tear, scoring 3 goals in 3:01 to take a 6-3 lead going to the third.

Matt Luff would score the first of the three goals as he finished off a beautiful pass from Matthew Strome as he buried it in the open net. The goal was Luff’s 16th of the season as Strome and Petti would be credited with the assists.

Luff would find the back of the net 22 seconds after finishing off another great set-up, this time from Michael Cramarossa as Luff would tip the pass through the legs of Blackwood for his second of the game and 17th of the year.

With less than two minutes to play, Michael Cramarossa would go from playmaker to goal scorer as he buries a loose puck at the side of the net for his 14th of the season as assists were given to Ondrej Kachyna and Luke Kutkevicius.

The Colts would enter the third looking to erase their second three-goal deficit of the evening. The comeback would commence early in the period as the Colts would make it 6-4 just two minutes into the period. After Keigan Goetz was appointed a major penalty for checking to the head, the Colts would strike shorthanded as Andrew Mangiapane would force a turnover, then send a pass to Labanc who would send it right back to Mangiapane. Mangiapane made no mistake and beat a disoriented Fulcher for his second of the game and 36th of the year.

The Colts would cut the Bulldogs’ lead to 6-5 with 12 minutes left in the game as Labanc would make another sensational pass, this time to a wide open Julius Nattinen who converted on the opportunity, blasting it by Fulcher. The goal was Nattinen’s 14th goal of the season as Labanc and Cameron Lizotte drew assists on Nattinen’s tally.

With 7 and a half minutes left in the game, the Colts would complete the comeback as Mangiapane and Nattinen would return the favour to Labanc to make it 6-6. As Nattinen took the puck behind the Bulldogs’ net, he would send the puck in front to Mangiapane who tipped the puck to an open Labanc who would finish off the play. The goal was Labanc’s 4th point of the game and 33rd goal of the year.

With 5 minutes left in the game, the Colts would take a penalty as Cameron Lizotte was sent off for holding. What seemed like a glorious chance for Hamilton to take the lead, it would be the Colts who made the most of it as they would take a 7-6 as Greg DiTomaso would set up Anthony Stefano who was perfectly positioned by the Bulldogs’ net and tapped home the go ahead goal. The goal was Stefano’s second of the game and 16th of the year as Cordell James recorded the second assist. The goal also marked the 5th shorthanded the Colts have scored in their past two games.

Despite an abundance of scoring chances from the Bulldogs, the Colts would hang on for the 7-6 victory. The win gives the Colts their 7th straight win and their 10th straight game with a point. With a goal and three assists, Kevin Labanc now has 98 points as he now 8 points ahead of Knights’ forward Christian Dvorak for the league lead.

Barrie’s next home game will take place Saturday, February 13th when they host the Guelph Storm. Get your tickets now by visiting BMC Box Office or going to www.ticketbreak.com.