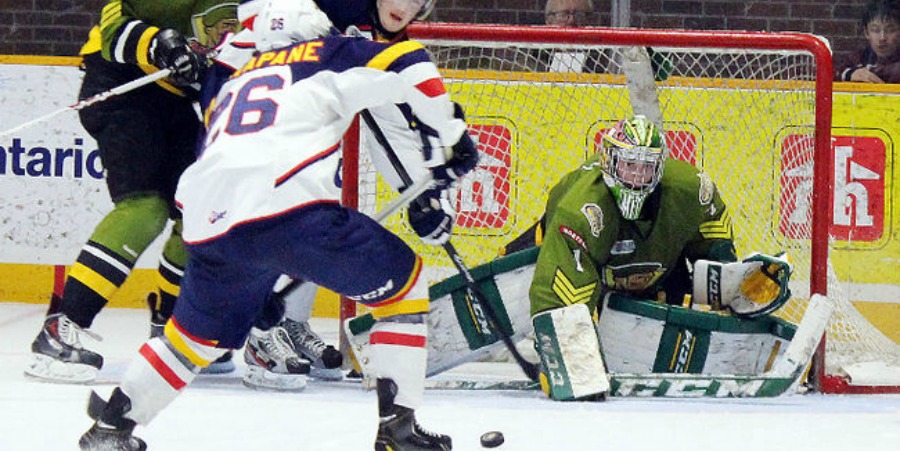 Dick Wolf of Law and Order fame couldn’t have scripted a better drama.

Two official reviews, two overtime breakaways and a penalty shot goal. Plus a shootout and the added pressure of two teams separated by two points in the Eastern Conference standings.

In the end, all two hours and 44 minutes of it, it was the Barrie Colts (22-17-3) who chipped away at the North Bay Battalion’s lead in the Eastern Conference and Central Division standings, rebounding from a 3-1 deficit to snag a 4-3 shootout win in front of 3,091 fans at Memorial Gardens.

Meaning North Bay’s edge over Barrie is down to a single point in the battle for fourth in the conference, which also happens to be a potential playoff preview between two teams that would meet in the first round of the post-season if the regular season started today.

“Every time you play a divisional rival like that, it’s going to be a playoff-like atmosphere,” said forward Ben Thomson, who scored a pair of goals Thursday on his 21st birthday. “I feel like that’s what tonight was and I think everyone is getting under each others’ skin and playing the body more than usual, maybe.

But this one looked like North Bay’s to take before the Colts handed their hosts just its second loss, both in a shootout, in the last eight games at Memorial Gardens.

During that span, the Battalion (21-17-6) has had balanced scoring, solid goaltending and clutch veterans stepping up. And that’s pretty much what they got Thursday as Thomson buried a pair of goals to push the hosts to a 2-0 lead 4:28 into the second period and Jake Smith made 33 saves in his fifth straight start in net.

Andrew Mangiapane, thanks to a swooping shorthanded setup from Brendan Lemieux, cut into the North Bay lead with 8:08 off the clock in the second, but Matt MacLeod restored the host’s two-goal edge before the period was over on a booming shot that beat Barrie backstop MacKenzie Blackwood.