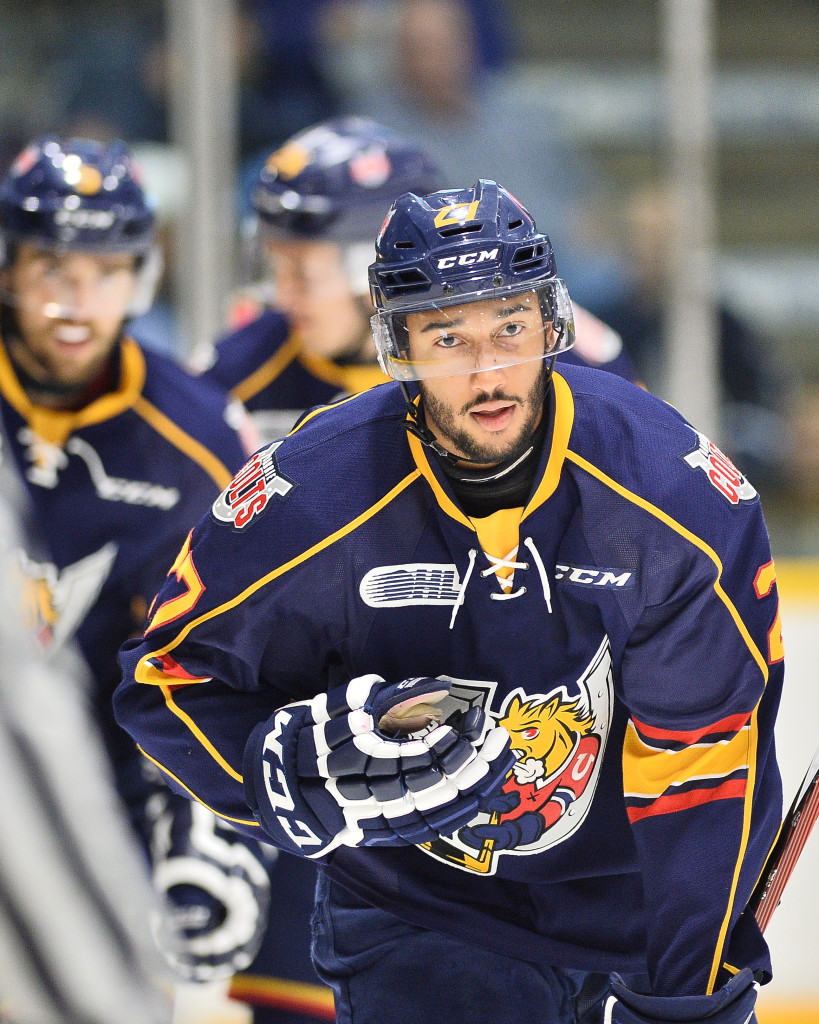 For their third game in four days, the Barrie Colts continued their travels to face the Saginaw Spirit on Sunday afternoon. The last meeting between these two teams came only eight days ago in Barrie with the Colts grabbing a 5-1 win.

The Colts would finish off their weekend grabbing another win over the Spirit. In the 5-3 win, Kevin Labanc recorded two goals and two assists, while Cordell James, Julius Nattinen and Brendan Lemieux each had a goal and an assist. In goal, Mackenzie Blackwood was very solid, despite allowing 3 goals, as he faced more shots than Evan Cormier who was in goal for the Spirit.

The Colts got on the board early in the game and had a 2-0 lead with only 16 seconds between goals. At 3:58, Lemieux intercepted a Spirit breakout, and then fed Labanc who in turn dished it over to Nattinen going to the net. Nattinen buried his ninth goal of the season on a pretty passing play to give the Colts a 1-0 lead. Then, before the Spirit could even announce the first goal, Labanc intercepted another Spirit breakout pass and went in all alone, beating Evan Cormier on a fake for his 11th of the season.

With less than eight minutes to go in the opening period the Spirit would cut the Colts lead in half when Mike Davies put home a backdoor feed from Artem Artemov for his third goal of the season. Keaton Middleton also assisted on the Spirit’s goal to make it 2-1. At the end of the first period, the Colts were leading 2-1 but the Spirit outshot them 13 to 11.

After the Colts were on the penalty kill only 1:18 into the second period, they still found a way to extend their lead.  Near the end of their penalty kill at 3:01, James was fighting hard behind the net and outmuscled Marcus Crawford and fed Labanc who put home his second goal of the game to give the Colts a 3-1 lead.

Then, just over five minutes later, the Colts would once again find themselves shorthanded for a full 2-minute 5-on-3 man advantage for the Spirit. This time, James blocked a Spirit shot, then won the foot race and beat Cormier for his eighth of the season.

At the end of the second period and on the power play, the Colts had a great chance when Andersson seemed to have an empty net chance, but after a scramble, the Colts couldn’t find the back of the net. The Spirit then transitioned from their zone and with their penalty having just expired, they were able to bury a goal of their own. Spirit point leader, Dylan Sadowy scored his 10th goal off of a rebound from Greg DiTomaso’s point shot of the Spirit to make it a 4-2 game late in the second period. Blake Clarke also grabbed an assist.

Despite being out shot in the second period 18-14, the Colts still led 4-2 going into the third period.

The third period would see both teams get chances, but it wouldn’t be until late in the period when either team would score. With 2:24 to go, the Spirit would capitalize when Sadowy beat Blackwood after he stayed with the play and turned and fired. Kris Bennett and Devon Paliani had the assist on the Spirit’s goal to make it 4-3.

But just 42 seconds later, the Colts would extinguish any chance for a comeback for the Spirit when Lemieux and Nattinen made a great give and go passing play coming out of the corner. Lemieux out waited Cormier and put home his 5th of the season. Labanc also assisted on the Colts 5th goal of the game to make it 5-3.

The Colts would be outshot in the win 42 to 37, but they managed to shut the door on all of the Spirit’s 6 power play chances. The Colts went 0 for 2 on their power play opportunities, although they did capitalize twice while shorthanded.

With his two goals and two assists tonight, Labanc extends his point streak to nine games, currently the longest of all Colts. Meanwhile, since returning to the lineup in November, Lemieux has gathered at least a point in every game.

With the win, the Colts move to 15-7-0-0 on the season, and hand the Spirit their 6th consecutive loss.

The Colts are back in action when they return home on Thursday, November 26th to take on the Owen Sound Attach. Next weekend will be a 3 in 3 for the Colts as they then travel to Kitchener on Friday night, and are back home on Saturday to take on the Niagara IceDogs. For tickets to upcoming Colts games, please visit the BMC Box Office or online at www.ticketbreak.com.