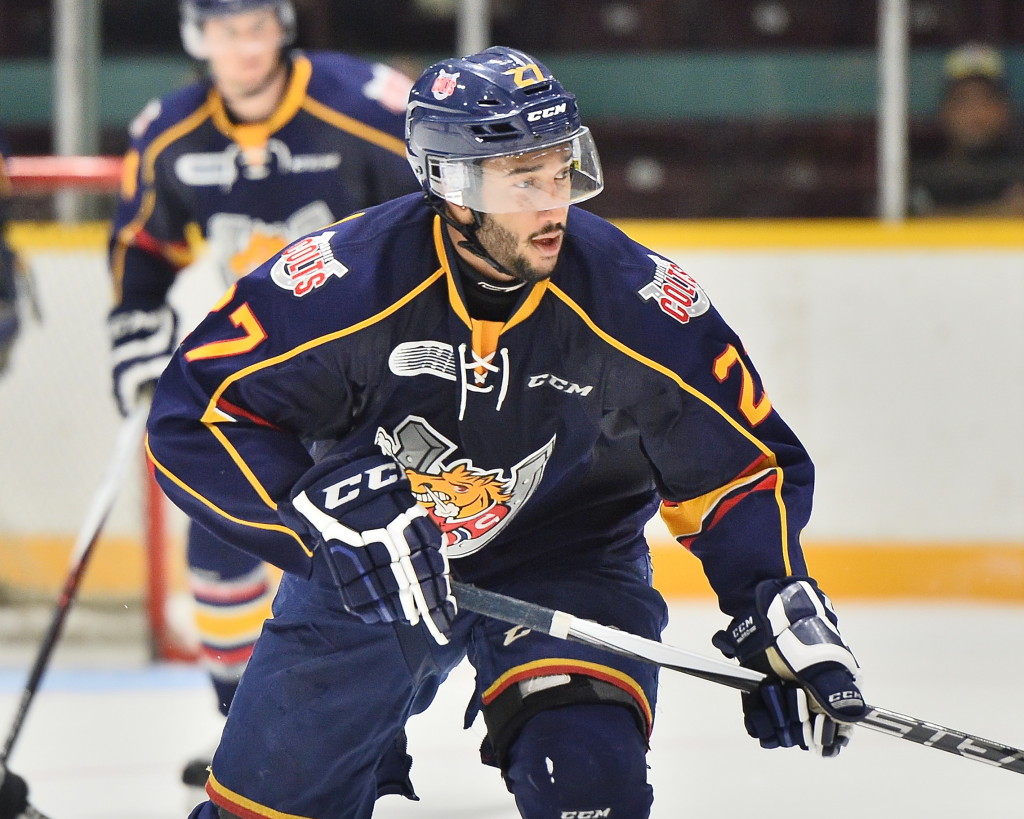 The Colts looked to string together consecutive wins for the first time in three weeks as they hosted the Ottawa 67’s Thursday night. Both sides decided to go with their backup goalies, as David Ovsjannikov would get the nod for the Colts while Ottawa went with Liam Herbst. Ovsjannikov got the start following Saturday night’s performance were he recorded his first career OHL shutout in an 8-0 beat down of the Mississauga Steelheads.

It wouldn’t take the Colts long to get on the scoreboard as Anthony Stefano would shovel one past Herbst just 35 second into the contest to give Barrie the early 1-0 lead. The goal was Stefano’s 18th of the year as Kevin Labanc and Rasmus Andersson would get the assists. With his 77th assist on the tally, Labanc set a new franchise record for assists in a season, surpassing the record that he set himself last season.

Following the opening goal, the pace of play picked up as both teams generated quality scoring to keep it a 1-0 game. The best save of the period was made by Herbst as he robbed Labanc with a beautiful glove save, spoiling Barrie’s opportunity to give themselves a two goal lead.

However, the Colts would eventually find the back of the net as Michael Webster took the Andrew Mangiapane pass and wired a slapshot past Herbst with 0.1 seconds left in the frame to make it 2-0 Colts. Rasmus Andersson would record his second assist of the night as he and Mangiapane registered the assists on Webster’s 8th of the year.

Barrie entered the second period up 2-0 as Ottawa outshot them 11-10 in the frame.

The Colts would struggle to find a consistent rhythm in the second as the league’s most disciplined team would follow three minor penalties in the first with three more in the second. The parade to the sin bin caught up to the team halfway through the second period as Travis Barron would snipe one by Ovsjannikov for his 11th of the season, cutting Barrie’s lead to 2-1. Ben Fanjoy and Nevin Guy would be credited with the assists.

Barron would strike again just 2:56 after his first goal when he would have a few whacks at a loose puck around Ovsjannikov before slipping it under the 6’6 netminder to tie it up at 2-2. Barron’s second of the night was his 12th on the year as Jeremiah Addison would notch the lone assist.

Despite giving up two goals in the frame, David Ovsjannikov was stellar as he stopped 15 of 17 Ottawa shots to keep the game tied heading into the third period.

The Colts would return to form early in the third as Cordell James would fire a shot past Liam Herbst only three minutes into the period. James potted his 18th of the season to regain the Colts lead. Ben Hawerchuk and Keigan Goetz would record the helpers on James’ marker.

The game would remain at high intensity with fast paced attacks from both teams as Barrie looked to distance themselves from the 67’s while Ottawa looked to once again tie it up.

The Colts high-powered offence would eventually be too much for the 67’s as they would score three times in a span of 4:08 to take a commanding 6-2 lead.

Michael Webster would score to make it 4-2 Colts with just under 8 minutes left in the period. After Kevin Labanc’s shot was deflected in the corner, a pinching Webster would grab the puck and fire it from the sharp angle to beat Herbst for his second of the game and 9th of the year as Labanc and Julius Nattinen recorded the assists.

Just under 2 minutes after Webster’s second, Anthony Stefano would also score his second of the game and 19th of the season after finishing off a beautiful passing play between Kevin Labanc and Julius Nattinen. Labanc would record his third assist of the night while Nattinen picked up his second.

Barrie’s sixth goal would come two and a half minute after Stefano’s second as Dylan Sadowy would finish off another gorgeous passing play from the Colts as he picks up his 39th of the year in his 250th career OHL game. With the goal, Sadowy has now scored in 5 straight games as Labanc and Andrew Mangiapane are credited with the assists.

David Ovsjannikov would stop 35 of 37 shots for his second straight win and his 13th win of the season. Rasmus Andersson reached a milestone with his two assists as he recorded the 100th assists in his OHL career and sits tied atop the league in scoring amongst defencemen with North Bay’s Cam Dineen as both guys have 55 points for the season.

The Colts will make their way to the Meridian Centre tomorrow night for a Central Division showdown with the Niagara Ice Dogs before returning Saturday night to take on the Owen Sound Attack. Get your tickets now by visiting BMC Box Office or going to www.ticketbreak.com.