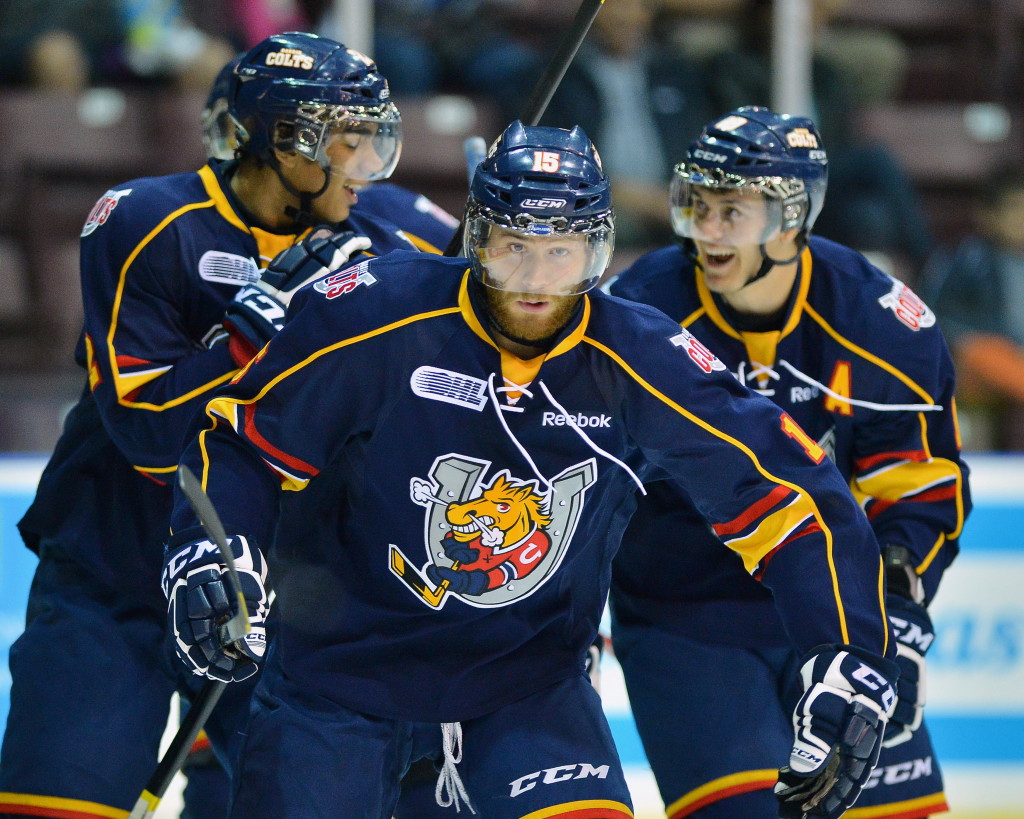 The Barrie Colts and Belleville Bulls met up for Game 3 of the Eastern Conference Finals at the Barrie Molson Centre. The game needed overtime to declare a winner and it was the Barrie Colts that came out on top as Anthony Camara notched the game winner to defeat the Bulls 5-4 in overtime.

At the 8:21 mark of the first period, the Belleville Bulls scored the opening goal as Joseph Cramarossa gave his team a 1-0 lead. The Colts responded on the power play with Zach Hall picking up his fourth goal of the post season to tie the game at 1-1. Hall capitalized on a rebound opportunity from an Aaron Ekblad wrist shot and made no mistake putting it home.

The Colts would take the lead at 18:31 of the first period as Mitchell Theoret skated around the Bulls goal and ripped a wrist shot by Bulls goaltender, Malcolm Subban. Barrie led over Belleville 2-1 through one period.

The second period displayed lots of offense as five goals were scored in the frame. Bulls’ forward, Tyler Graovac tied the game at 2-2 with Jake Cardwell and Austen Brassard collecting the assists.

The Colts responded with two quick goals from Jake Dotchin and Jonathan Laser to take a 4-2 lead. The goals scored were each their first of the playoffs.

The Bulls would not quit though as Garrett Hooey scored on the power play to cut Barrie’s lead to 4-3. Finally, Jake Cardwell took a nice pass from Brendan Gaunce and his wrist shot beat Colts goaltender, Mathias Niederberger to tie it at 4-4.

The third period solved nothing and the game went into overtime. Both teams traded several scoring chances during the 20-minute overtime period and it appeared that the game was heading into double overtime. However, with 5 seconds remaining, Anthony Camara scored the game-winning goal as he received a pass from Hall in the high slot and fired the puck by Subban to seal the game 5-4. Jake Cardwells four point night wasn’t enough for the Bulls and Zach Hall added a goal and two assists in the Colts overtime victory.

The Barrie Colts now own a 2-1 series lead over the Bulls and they will be back in action for Game 4 on Wednesday April 24th at the Barrie Molson Centre. Puck drop is at 7:30p.m. Click here for tickets.