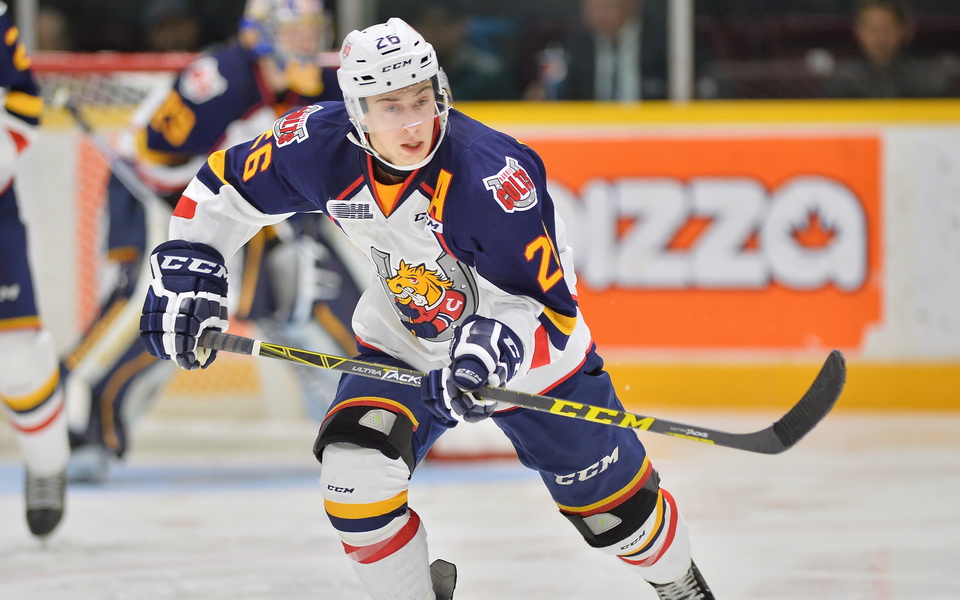 After quite an eventful Saturday night game that saw the Colts thump the Battalion 12-2, the two teams were back in action less than 24 hours later. Sunday’s afternoon game though would see two completely different teams as the Battalion battled back from being down 2-0 early on, to winning 5-3.

With their fourth game in less than a week, the Colts got off to an early start with the first two goals of the game coming from Justin Scott and Anthony Stefano, and would add one more in the third period from Kevin Labanc. By that time though, the Colts had allowed 5 straight Battalion goals. In the loss, Andrew Mangiapane recorded two assists and now sits at 199 points all time. Brandon Prophet, Roy Radke and Justin Murray also tallied assists.

Early in the game, the Battalion found themselves breaking in 4 on 1. With a great defensive play, Murray intercepted the pass, preventing the Battalion from even getting a shot off. That interception in turn sprung the Colts on a 2 on 1. Labanc and Scott ended up with a great chance, but couldn’t bury on a give and go.

Neither team would get on the board in the first half of the period. It wouldn’t be until 12:55 into the period when the Colts drew first blood. Mangiapane made a backhand feed to Scott who was in the slot. Scott fired a shot and grabbed the rebound for his 14th goal of the season. Prophet also assisted on the goal.

The second period opened with the Colts extending their lead when Stefano netted his 12th goal of the season. 1:50 into the period, Radke got the puck to Stefano in the slot for the goal. Murray also assisted on the Colts second goal of the game.

But before the end of the period, the Battalion would battle back and take the lead.

A minute later, the Battalion would cut the lead in half when Aaron Dart, who was called up for his first OHL game from the Battalion, would find the back of the net for his first career goal. Brett McKenzie and Jacob Ball assisted on Dart’s 2-1 goal.

The Battalion would then tie the game up at 2-2 13:31 in the second period. On a 5-on-3 power play, Mike Amadio fed Kyle Wood for a one-timer and Wood made no mistake, beating Ovsjannikov.

Then, they would take the lead with less than five minutes to play in the period and on the power play. Mathew Santos scored his 11th goal of the season, while Daniil Vertiy and Mike Amadio assisted on the go-ahead Battalion goal.

The third period would begin with a quick goal from the Battalion to double their lead. Only 39 seconds in, Cam Dineen would score his 6th goal of the season. Steve Harland assisted on the goal that made it 4-2. Then, nearly 2:30 into the period, the Battalion would gain a 3-goal lead when they capitalized for the third time on the power play. Daniil Vertiy got the puck to Mike Wood on the point. Wood’s point shot was tipped by Mathew Santos to beat Ovsjannikov. The 5-2 goal would force the Colts to replaced Ovsjannikov with Badenhorst for the remainder of the game.

Playing against the team with the league leading 15 short-handed goals, the Colts would score a shorthanded goal of their own. 7:23 into the period, Mangiapane broke into the Battalion zone and fed Labanc driving to the net. Labanc made no mistake and scored his 21st goal of the season to cut the Battalion lead to two.

Making it 5-3 would be as close as the Colts would get. Despite pulling Badenhorst for the extra attacker in the last minute, they were unable to find the back of the net with enough time to spare.

The Colts went 0 for 5 on their power play opportunities, and allowed three Battalion power play goals out of their five chances.

In goal, Ovsjannikov stopped 20 of the 25 shots he faced, while Badenhorst stopped all 7 shots he faced in his 16:15 minutes of play.

The Colts are back in action on Thursday, January 7th when the Mississauga Steelheads visit the BMC. For tickets to that game, visit the BMC Box Office or click here.