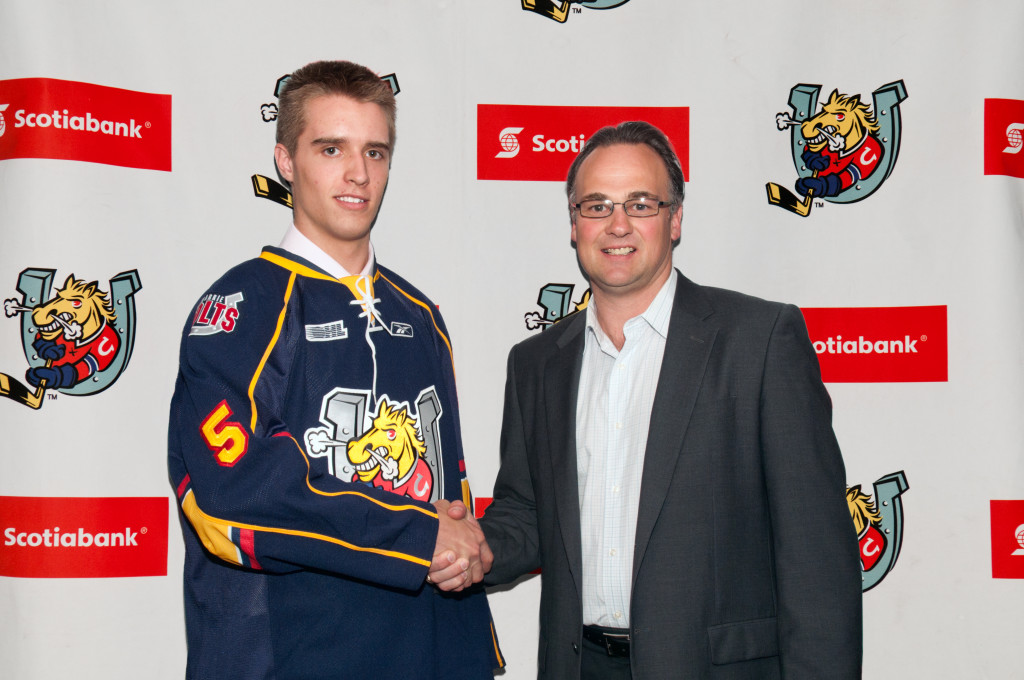 The Ontario Hockey League in association with the Barrie Colts are announced today that Aaron Ekblad will be the first overall pick in the 2011 OHL Priority Selection, presented by State Farm.

Colts President Howie Campbell made the announcement at a press conference this afternoon in Barrie.  The 2011 OHL Priority Selection is set for Saturday, May 7th beginning at 9:00 a.m.

Aaron will be a featured guest on the live 2011 OHL Priority Selection Draft Show, presented by State Farm.  The draft show along with complete draft coverage is available at www.ontariohockeyleague.com.

On March 31, 2011, the Ontario Hockey Federation announced the results of the review by Hockey Canada in consideration of the application by the 15-year-old Ekblad, determining that the player is to be granted “exceptional player” making him the only 1996-born player eligible for the Priority Selection.

Ekblad becomes the first player since John Tavares in 2005 to be granted “exceptional player” status.  Tavares was selected first overall by the Oshawa Generals and eventually became the first pick of the New York Islanders.

Ekblad, 15 years old from Belle River, is the 2011 Jack Ferguson Award winner as the player selected first overall in the OHL Priority Selection.  He is just the second Colts player to ever win the award after Daniel Tkaczuk was picked first by Barrie back in 1995.

As a 14 year-old Ekblad led the Sun County Panthers to an ALLIANCE Championship title, and was named a First-Team All-Star at the 2010 All Ontario Bantam AAA Championships.

Barrie Colts Head Scout and Director of Player Personnel Darrell Woodley is very happy to have Ekblad.   “He’s the complete package, a big defenceman who skates real well for a big guy.  He’s got great offensive skills and he’s really committed to his own end, he’s just an all-around type of defenceman, similar to a Chris Pronger type.”

“He has very special qualities about him and he really is a great kid,” said Colts Assistant General Manager Jason Ford.  “He does so many things well-he really is everything you could ever want in a player.”

For the fourth straight year, media and fans can watch the first three rounds live on the 2011 OHL Priority Selection Draft Show presented by State Farm beginning at 9:00 am at www.ontariohockeyleague.com.  Host Terry Doyle will be joined on set by Phoenix Coyotes Amateur Scout and former Peterborough Petes General Manager Jeff Twohey, and GTA Scout Tim Cherry of OHL Central Scouting to provide analysis, interviews, and video footage of the next wave of OHL stars.  The webcast is in partnership with CCMC and is shown through league partner NeuLion, presented by State Farm.