Zhukov and Pekar Selected by Colts in Import Draft 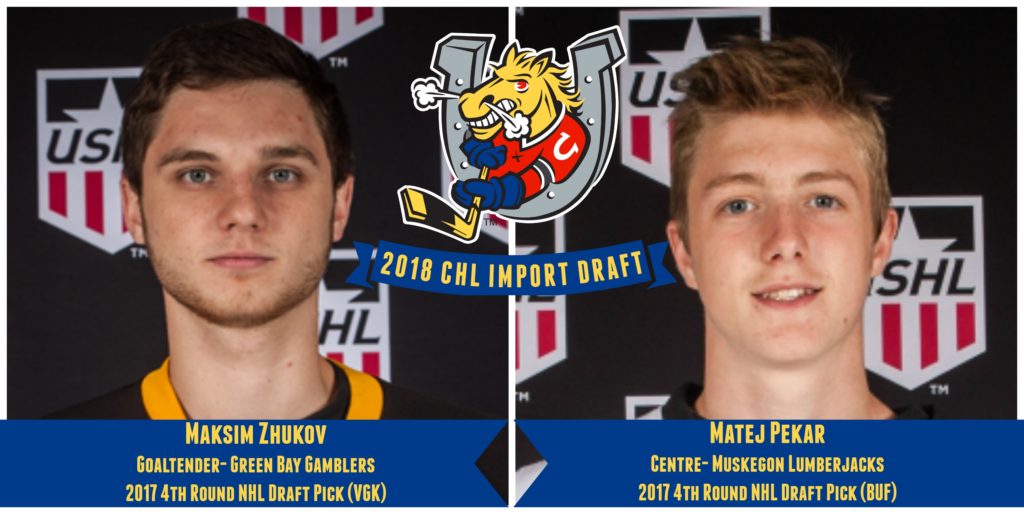 The Barrie Colts selected goaltender Maksim Zhukov and Centre Matej Pekar with their two picks in the 2018 CHL Import Draft.

“With the uncertainty sometimes coming into play in the Import Draft, we decided to take the best players available with our two selections; Maksim Zhukov and Matej Pekar” said Barrie Colts General Manager and Head Scout, Jason Ford.

“Both players are looking at the NCAA route as their next option for hockey moving forward, so we have some work to do recruiting them.   If it turns out we sign both of them then this will have turned out to be a very promising Import Draft.”

This year the team had a different outlook on the draft, not knowing who would go in front of them as oppose to last year where they held the #1 pick and selected Right Winger, Andrei Svechnikov (Selected #2 overall to Carolina in 2018 NHL Entry Draft).

Barrie came into the draft holding the 48th and 108th overall picks.  With some teams deciding to pass their picks the Colts were actually selecting 41st and 72nd picks in the draft.

With their first selection (48th overall) they selected Goaltender, Maksim Zhukov from the Green Bay Gamblers of the USHL.  Last year in Green Bay he played in 53 games posting a 27-19-1 record with a 2.45 GAA.  Zhukov was also selected in the 4th round of the 2017 NHL Entry Draft by the expansion Vegas Golden Knights.

“Zhukov is a talented goalie that we are familiar with from the Under-18 tournament in Slovakia in 2017, and then his play in Green Bay.  He has a lot of ability in his game and gained plenty of mileage last season playing in North America” said Ford.

With their second and final selection in the 2018 CHL Import Draft the Colts selected Centre, Matej Pekar 108th overall from the Muskegon Lumberjacks of the USHL.  Pekar played in 56 games with the Lumberjacks, recording 14 goals and 40 assists during the season.  He was also selected in last years NHL Entry Draft by the Buffalo Sabres in the 4th round.

“Pekar really came on last year with Muskegon, and plays a high-energy game that will create offence.  He is a mature kid that wants to be a player and will do whatever he can to achieve his goals” said the Colts General Manager.

For a look at the entire 2018 CHL Import Draft click here.