Wolves Take Their Revenge on the Colts, 6-4 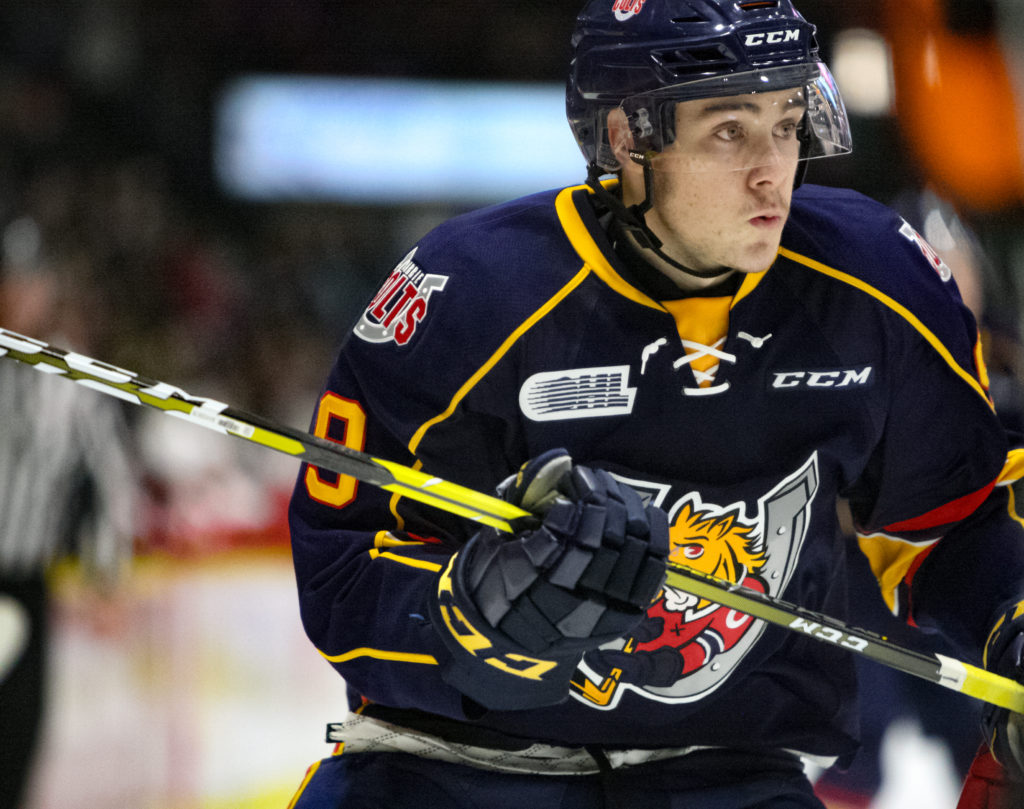 Despite maintaining the lead for most of the game, the third period saw the Barrie Colts fall prey to the visiting Sudbury Wolves in a 6-4 loss.

Following their 1-0 overtime victory against the Wolves Friday night in Sudbury, the Colts were back on home ice and looking to keep the momentum going.  Friday’s game also marked the first career OHL shutout for Colts goalie Jet Greaves, who made 37 saves.  Defeating the Wolves again was crucial, as the Colts were still aiming to secure the 8thposition in the Eastern Conference.

The Barrie Colts would be the first team to draw blood and begin the wolf hunt.  Just under six minutes into the first period saw Tyson Foerster’s shot rebounded off Sudbury Wolves goalie, Jonathan Lemaire, and caught by Luke Bignell, who fired the puck past Lemaire to open up the scoring. This goal marked Bignell’s 9thgoal of the season.

The period saw the two teams evenly matched in skill and ferocity; however, with just over three minutes left in the first period, the Wolves increased their offensive, and leftwing Nolan Hutcheson was able to knock the puck past Greaves. Yet, the Colts were determined to show the Wolves they were howling up the wrong tree.

It looked like the first period would end in a tie; however, a penalty against Wolves defenseman Liam Ross gave the Colts a power-play.  The boys took the advantage and Colts defenseman Tyler Tucker found the back of the net, assisted by Ryan Suzuki and Tyson Foerster.  The Colts were going into the second period with a 2-1 lead over the Wolves, despite being outshot 13-5.

The beginning of the second period saw tensions running high, as the Wolves started to bare their teeth, and the Colts kicked back.  Just over six minutes into the period, and with each team losing a player to the penalty box, Tucker scored his 2ndgoal of the night and 11thof the season, assisted by Ben Hawerchuck.  The Wolves decided it was time for a change and pulled Lemaire, putting Ukko-Pekka Luukkonen between the posts.

Sudbury was quick to respond to Tucker’s goal.  Less than a minute later, leftwing Macauley Carson notched a goal for Sudbury to try and close the gap and overtake Barrie’s lead.

The Colts refused to let up and kept the heat on the Wolves in their end.  With just over six minutes left in the period, the boys were able to break through the Wolves defense and Sam Rhodes scored his 1stgoal of the night and 8thof the season, assisted by Jason Willms.

The Colts were now up 4-2, but the Wolves were once again quick to respond. Quinton Byfield nicked a goal on a breakaway, bringing the score to 4-3 with five minutes left in the period. The Colts finished the period in the lead, despite once again being overwhelmingly outshot by the Wolves 29-11.

As the third period began, the big question was whether or not the Colts would be able to maintain their tight lead over the Wolves.  Unfortunately, with just under twelve minutes left of play, a surge in the Wolves offense saw Nolan Hutcheson net another goal for Sudbury, tying up the game.

Sadly, the hits just kept on coming as the Wolves made up for lost time.  With under eight minutes left in the game, Byfield scored his second goal of the game for the Wolves, that saw some debate amongst the refs.

With under two minutes left, Barrie decided to pull Greaves in an attempt to create a 6-on-4 power-play, but to no benefit.  Sudbury scored on the faceoff and sealed Barrie’s fate, taking the game, and making for a sad close to the weekend for the boys with a 6-4 loss.