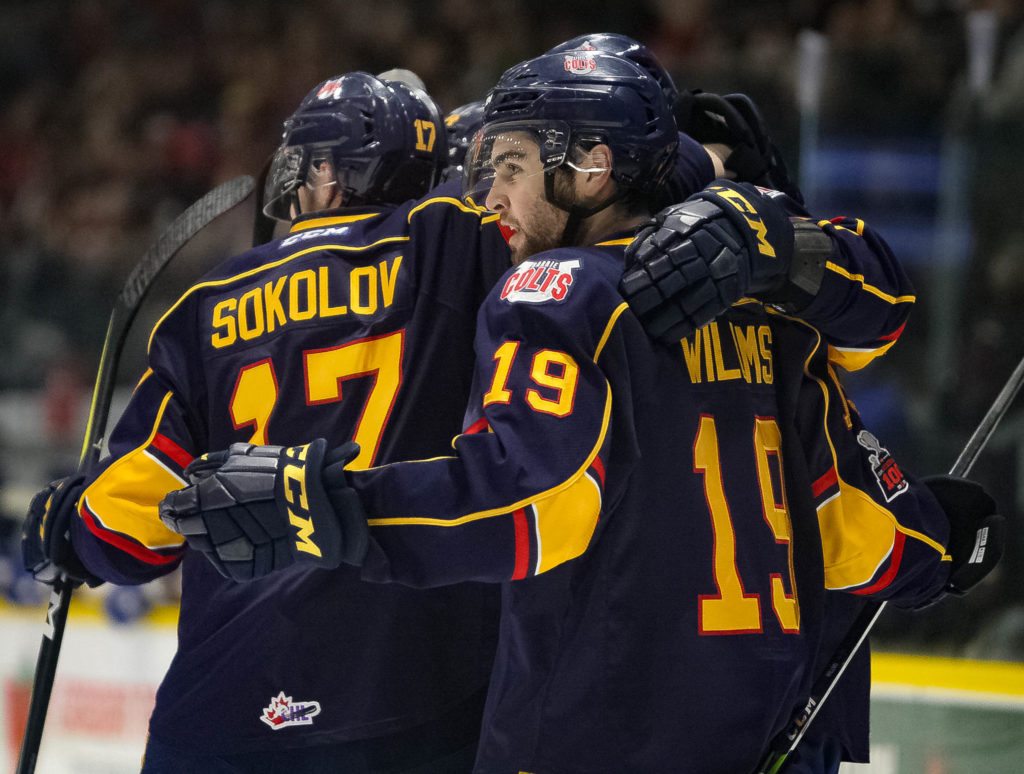 Jason Willms would turn and rip a shot from the corner for the game winning goal surprising Frontenacs goalie Jeremy Helvig giving the Barrie Colts a game 1 victory to open up their 2nd round series and an extra birthday present for coach Dale Hawerchuck.

Coming off an exciting finish to close out the first round the Colts would kick off round 2 Wednesday night squaring off with the Kingston Frontenacs in the Eastern Conference Semi-final matchup. Kingston would provide another stern test for the Colts.

At 8:06 of the opening period the regular season’s best powerplay would get the first opportunity to strike.

From behind the Barrie goal Cliff Pu would find Linus Nyman at the bottom of the left circle snapping a shot over the shoulder of Leo Lazarev to give the Fronts the first leas of the series.

The Colts would quickly turn the momentum and find the equalizer just past the midway point of the period.

Off a faceoff won in the Kingston zone by Willms, Jaden Peca would pick up the loose puck, his first shot blocked but with a second crack at it, fired it past Helvig for his 2nd of the playoffs to knot things up at one apiece.

With just over two minutes remaining in the first Kingston would regain the lead after Justin Pringle would jump on a rebound chipping it over Lazarev’s pad.

Aaron Luchuk would enter the zone finding Tyler Fergus streaking down the middle and lay perfect tip pass for Dmitry Sokolov on the left side to tap home his 6th goal of the playoffs and take a 2-2 tie into the intermission.

Into the second, once again it would be the Fronts getting on the board first. At 3:37, while fending off the Barrie defense Matt Hotchkiss would sneak one under Lazarev’s pad to make it 3-2.

Sokolov skating from the right circle fired a shot on Helvig. As the puck would squirt loose in front, finding it would be Luchuk pushing it over the line for his 4th of the post season with the secondary assist going to Andrei Svechnikov.

The Colts wouldn’t let off the pedal keeping the pressure on and at 18:14 take their first lead of the series.

Zach Magwood would poke a loose puck in the slot to Lucas Chiodo who found Ryan Suzuki wide open off the right side snapping home his first OHL playoff goal.

Into the final period of play the lead would only last until the five-minute mark before Kingston would tie the game again. While on the powerplay Jacob Brahaney would fire a shot through a screen to the back of the net.

Before you knew it, moments later the Colts would go back to work on the powerplay and answer again.

Suzuki would send a cross ice pass right to the Fronts crease for Willms to bang home the go ahead marker for his 2nd playoff goal and make it a 5-4 game.

Two minutes later, the seesaw action would continue as Jason Robertson would make it 5-5.

The scoring chances would continue throughout the third but neither team could get the go ahead marker sending the game to overtime.

In overtime, Willms would send the Colts to victory just 1:58 into extra time. Ben Hawerchuck would pick up the only assist on the play.

Game 2 will go Friday night with a 7:30pm puckdrop at the Barrie Molson Centre.