Willms the Overtime Hero in Win Over the Bulldogs 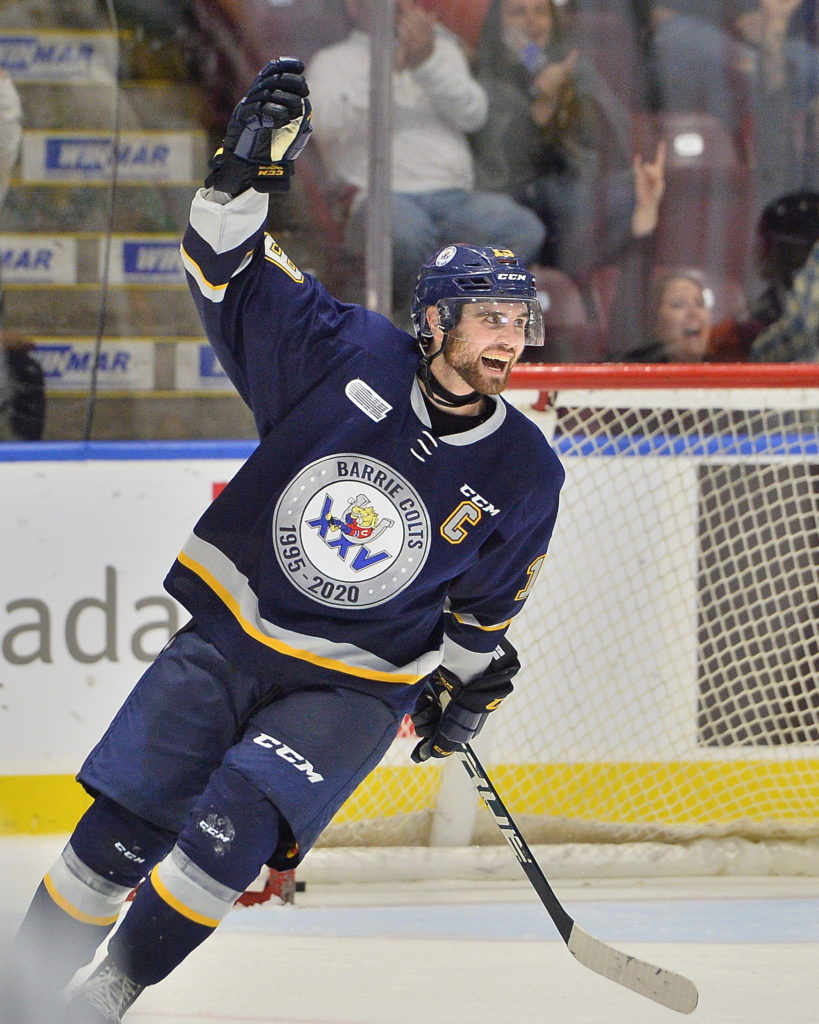 The Captain, Jason Willms would bring the home town faithful to their feet, sealing the Colts victory at 3:34 of overtime to take a 4-3 win Saturday night.

The second goal of the night for Willms would snap a three game skid for the Colts, as they keep chase in the Central Division standings.

Coming off a tough overtime loss in Sudbury the night prior, the Colts welcomed the Hamilton Bulldogs. The two teams meeting for the third time this season, in what had been a very high scoring season series so far, averaging 10 goals per game coming into the night. The Colts knew they would have to slow down Hamilton’s OHL leading scoring tandem, of Arthur Kaliyev and Jan Jenik.

Just 25 seconds into this one the Bulldogs would strike. Payton Vescio would cause a turnover at the red line and skate in on a 2 on 1. Sending it over to Logan Morrison, he one timed it past Arturs Silovs for the opening goal.

The lead wouldn’t last long as the boys would respond quickly. Nathan Allensen would send a blast just wide, but the rebound kicked directly out to Aidan Brown who quickly fired it off the far post and in knotting things up at 1.

At 10:53, Willms would collect his first of the night to the boys ahead. After Tyler Tucker sent a low shot towards the goal, Luke Bignell would dig the puck loose for Willms to bury it at the side of the net for his 8th of the season.

Before the period was out the Bulldogs would get even once more. Avery Hayes skating below the red line would bank a shot off the back of Silovs and into the net.

The Colts carried much of the play throughout the opening period showing a 24-10 shot advantage through twenty minutes, but the score remained 2-2.

Nearing the midway point of the second, the Bulldogs would once again retake the lead. Jenik would out muscle the Colts defenders bringing it out front to feed Navrin Mutter to pot their third goal.

Into the third the Colts were peppering Hamilton starter Costantini with shots. Just past the midway point of the final frame the boys would get the chance to pull even on the powerplay.

At 11:22 it would be Foerster hammering a one timer from the top of the left circle to make it a 3-3 game. The powerplay goal was his 16th of the season, with assists to Allensen and Tucker.

Barrie would outshoot the Dogs 14-8 in the third, but after 60 minutes the game would go to overtime.

In the overtime period it was all Colts, dominating with possession. While early on it looked as if Bignell had the winner as he was dragged down going to the net. The puck found its way over the line, but was called back for goaltender interference. Just two shifts later the boys would seal it. Aidan Brown would find Willms wide open at the left side of the net to put home his second of the night. Allensen would collect his third assist of the night.

The win caps off the two game week for the Colts. They’ll be back in action Thursday night at home to take on the Flint Firebirds. Puck drop as always 7:30pm.