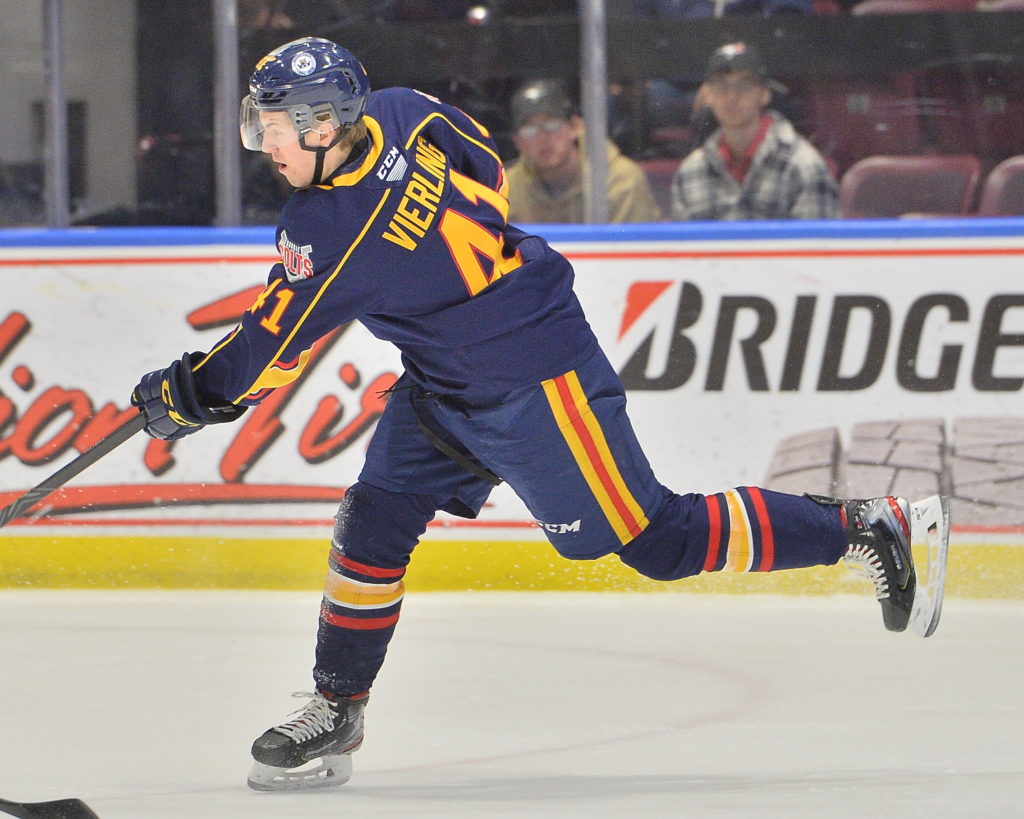 The Barrie Colts were in Kingston for a Family-Day Monday matinee against the Frontenacs, closing out a stretch of three of four games away from home and looking to bounce back from a disappointing loss to the North Bay Battalion at The Colts Centre on Saturday night.

In a battle between the two Frasca brothers – Barrie’s Jacob and Kingston’s Jordan – the two took the opening draw opposite one another. Chances were few-and-far-between in the opening period, with the shots favouring Kingston 11-4. Barrie’s best scoring opportunity came right off the initial faceoff. Jacob Frasca won the draw forward, Josh Nelson took it and found Nicholas Porco streaking to the net, but he couldn’t beat Frontenacs goalie Ryan Dugas. Barrie didn’t register a shot on goal for the final 7:36 of the period.

The only goal of the period came right at the tail end of a Kingston power play. With Anthony Tabak serving a slashing sentence in the sin bin, Jakob Brahaney found Martin Chromiak in the left faceoff dot. His one-time drive ramped up off the pad of Arturs Silovs and in for a 1-0 Kingston lead on Chromiak’s 11th of the season.

Just before the 2-minute mark of period two, the Colts broke a five-period team goalless drought. Off a turnover inside the Kingston zone, Tyson Foerster had his shot stopped by Dugas. Kingston would never get the puck back, as, after the Colts won a puck battle, it ended up behind the net and eventually on the stick of Evan Vierling. He was able to walk out uninhibited from the left of the goal and put the tying goal past Dugas. Vierling continues his stellar play of late, scoring his 10th of the year. He now has goals in six of his last eight.

The Colts then had a glorious opportunity to extend their edge. Dugas terribly misplayed a dump-in and, due to some miscommunication with his defencemen, gave the puck right to Foerster, who centred for Aidan Brown, but the overage forward fired one high over a yawning cage.

Barrie wouldn’t have to wait long to get some redemption. Foerster was in on yet another Kingston turnover, this one at their blueline, and sent Luke Bignell away. He was able to stave off a check from Brahaney, move in alone and flip one over the blocker of Dugas to give the Colts the lead on his 14th of the year.

And the visitors weren’t done there. The Colts had a beautiful breakout that saw four players touch the puck. Nelson found a trailing Tabak who came in and rang one off the bar. Then, off a won draw in the offensive zone, Christopher Cameron played one over for Victor Hadfield, who knuckleballed his 7th of the season by Dugas to give his club a 3-1 lead after 40. Barrie outshot the Fronts 17-10 in the middle stanza.

The guests did a great job in the third period of clogging up the middle of the ice, allowing for very few chances. The Frontenacs did get a power-play goal courtesy of Shane Wright, who absolutely wired one bar down on Silovs to cut the lead to one on his 34th tally of the year.

Then the Colts responded, immediately – immediately being just 10 seconds later. Foerster, who was everywhere on the ice in this game for Barrie, forced another Kingston giveaway and set up Vierling, who beat former Colt Christian Propp – who came into replace Dugas for the final 20 – for his second of the day and 11th on the year. That restored the Colts lead to a pair at 4-2.

Kingston generated very little over the final five minutes, and with 26 half-a-minute left, Vierling salted it away with an empty-netter off a nice backhand ariel from Brandt Clarke for his first career OHL hat-trick and a 5-2 Colts victory.

Barrie moves to 55 points on the year and ahead of Mississauga into a tie with Hamilton for 5th in the Eastern Conference by virtue of the Steelheads’ 4-0 loss to Erie. Hamilton’s win over Kitchener keeps them tied with the Colts. Both teams remain nine back of Oshawa, who beat Owen Sound 4-3 in OT, for fourth, while the Colts move back to within four points of Sudbury for 1st in the Central Division thanks to their 5-2 loss in Peterborough. Barrie still has two games in hand on Sudbury, Oshawa and Hamilton.

The Colts return home Thursday night to host Ryan Suzuki, Dalton Duhart and the Saginaw Spirit, before entertaining the Windsor Spitfires on Saturday. Tickets for both those games can be purchased here.