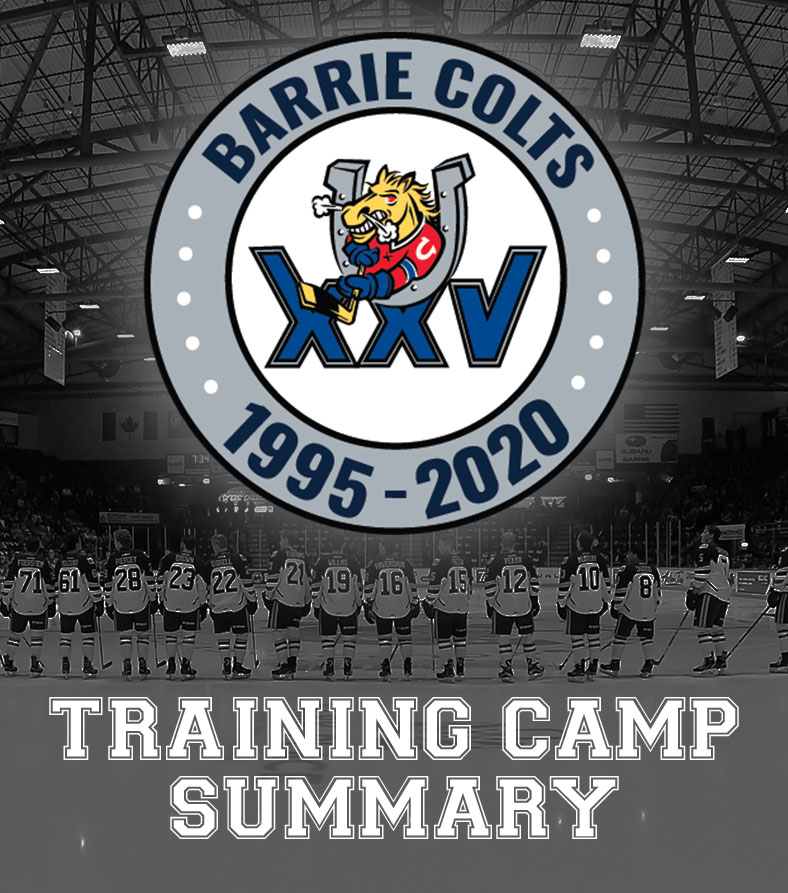 The Barrie Colts began training camp on Tuesday. The players started with fitness testing at Mind to Muscle. Everyone was tested in agility, power, explosiveness, and strength tests such as push-ups and pull-ups. Four ice sessions followed that, beginning with a goalie practice and then each of the three individual teams hit the ice for their practices.

On Wednesday, six games were played, with each team having four games throughout the day. Former Colt and current Detroit Red Wing, Andreas Athanasiou joined in during the scrimmages and mentored the younger players throughout the camp.

Cuts were made Wednesday night as the Colts narrowed the roster down to accommodate two teams in preparation for the annual Blue vs. White game which takes place tonight at 7pm.

A hat-trick from 2018 draft pick Aidan Hughes, and a pair from this years 1st round pick Brandt Clarke would give Team Blue the 5-4 victory for the second year in a row.

After a couple days of off-ice testing and intersquad scrimmages it was time for the Barrie Colts annual Blue-White game Thursday night from Colts Centre in day 3 of training camp.

Team White would jump out to the early lead. Jack York, recently named a camp invite to the Montreal Canadiens would open up the scoring on a shorthanded breakaway just over four minutes in, while Jake Partridge added another.

Team Blue would come right back minutes later to cut the lead in half. Hughes fired a shot short side to put Blue on the board.

Shortly after Clarke would join the scoring as well, sending one from the point to even the game at two apiece.

The second period would prove uneventful for the most part until late in the frame. Hughes would add his 2nd tally of the night to break the tie and give Blue a 3-2 lead into the intermission.

Just over five minutes into the final frame Clarke would give Team Blue the insurance. In similar fashion to his first, a seeing eye shot from the point found the back of the net.

The hot night for Hughes would continue, midway into the period while shorthanded he’d pot another to complete the hat trick.

Team white would come right back thanks to a pair of goals by Oliver Smith and Blake Hall by that’s as close as they’d come.

Training camp action continues as the boys will head down to Niagara to take on the IceDogs tomorrow night.