Top prospects Robertson and Suzuki following examples set before them 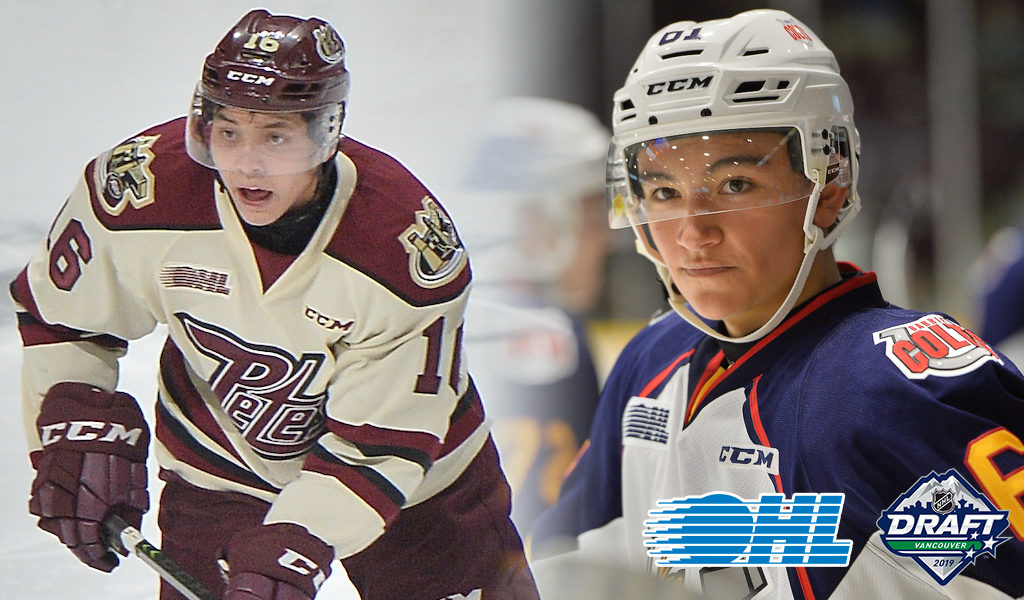 Two of the OHL’s most highly skilled forwards in the 2019 NHL Draft class enter this weekend’s highly anticipated event in Vancouver having seen and experienced it before.

Peterborough Petes winger Nick Robertson and Barrie Colts centreman Ryan Suzuki may have taken their lumps growing up as kids, but it turns out having an older brother in the hockey world pays dividends.

“I always say to people that my brother is kind of like a practice test,” said Robertson, whose older brother Jason was a second round pick of the Dallas Stars in 2017 and led the entire Canadian Hockey League in scoring this past season. “I’ve been watching and learning from him my entire life and it’s helped me get through some situations.”

The Suzuki brothers have maintained a friendly rivalry throughout the years. But on June 21, @nsuzuki_37 will be cheering for @RSuzuki61 100%.

Originally from Pasadena, California, the Robertson brothers caught the hockey bug growing up watching the Los Angeles Kings. They played their youth hockey in Los Angeles, travelling in an RV to and from the arena for practices and games.

The younger Robertson and his family moved to Northville, Mich. when he was around eight years-old. After older brother Jason was drafted out of the GTHL by the Kingston Frontenacs in 2015, Nick followed suit, spending the 2016-17 season with the Toronto Red Wings before being selected 16th overall by the Peterborough Petes.

Described by NHL Central Scouting as “an excellent skater with water bug elusiveness and heads-up abilities with eyes in the back of his head,” Robertson put up 55 points (27-28–55) over 54 games in Peterborough this past season. He also represented the United States at last summer’s Hlinka Gretzky Cup, recording five points (4-1–5) in as many games.

“We have the same goals, same mentality and we’re really close,” Robertson said of his older brother. “I had a chance to play against him a lot in the OHL and it was always a lot of fun.”

While Nick had a chance to witness Jason go 39th overall to Dallas at the United Center in Chicago, Ryan Suzuki had seen his older brother Nick go 13th overall to the Vegas Golden Knights.

The 2019 OHL Playoff MVP and Most Sportsmanlike Player for a record third straight year, career 328-point scorer Nick Suzuki has done about all there is to do in the OHL and is ready to take the next step in his career with the Montreal Canadiens organization. Younger brother Ryan, a former first overall OHL Priority Selection choice himself, says the competitive relationship with Nick has helped make him the player he is today.

#OHL talent to watch at #NHLDraft ?@nickrob2001 of @PetesOHLhockey plays the game with speed and smarts while following the way of his older brother @JasonRob1999 ? pic.twitter.com/p9xT3f36tF

“Playing mini sticks in the basement or road hockey out on the street, I always gave him a good game,” he said with a smile. “Having a guy like him pushing me, we were always competitive.

“We always battled hard against each other. He didn’t want to lose to his little brother, so he was always going hard on me. I’d always give him a good challenge, but a lot of guys don’t have someone like Nick in their lives.”

While a rebuilding Barrie Colts club missed out on the OHL Playoffs, Suzuki led the group in scoring with 75 points (25-50–75) over 65 games. He also won gold with Canada at the Hlinka Gretzky Cup in Edmonton and Red Deer, recording eight points (1-7–8) in five games. Suzuki also suited up for Canada at the 2019 IIHF World Under-18 Hockey Championship in Ornskoldsvik and Umea, Sweden this past April.

Stay tuned to ontariohockeyleague.com for continued NHL Draft coverage leading into and throughout the weekend.