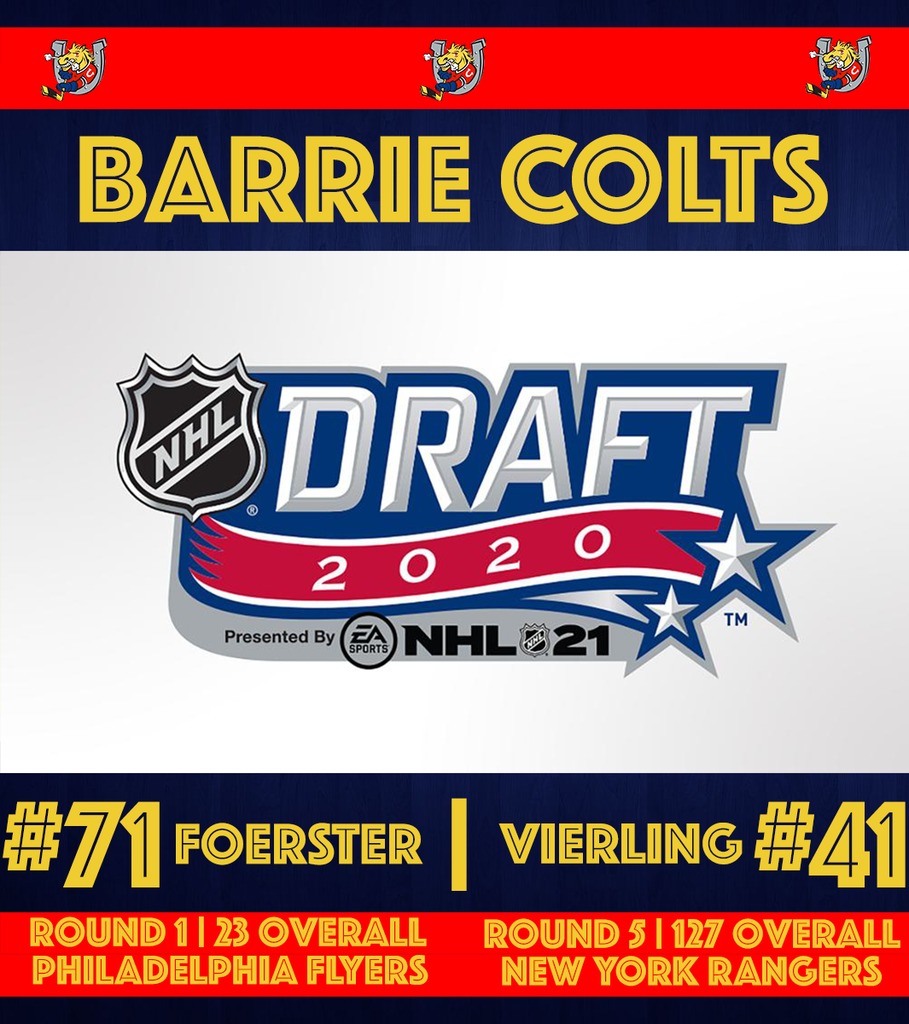 The NHL Draft was originally scheduled to be held on June 26th and 27th in Montreal, Quebec. Due to COVID-19, round 1 of the draft was rescheduled for October 6th, with rounds 2-7 following on October 7th.

Barrie’s superstar right-wing forward, Tyson Foerster, had a breakout sophomore season. After being drafted 55th overall in the 2018 OHL Priority Selection, Foerster joined the Colts in the 2018/2019 season. Scoring 10 goals and racking up 23 points in his first year, Tyson was determined to increase his offensive output in his second season with the team. The 2019/2020 season brought a stronger, more confident player, who scored 36 goals and achieved 80 points within the timeframe of the shortened season.

”Tyson is a player that our staff has coveted going back to his minor hockey days. He is a great talent and has a strong passion for the game.  We are very proud of the hard work he has put into his development to get to this point. Being selected by the Philadelphia Flyers is a great accomplishment for Tyson and his family.  Tyson being a graduate of the Barrie Minor Hockey program is something our entire community can be proud of” said Howie Campbell, President & Owner of the Barrie Colts.

Foerster was invited to the Kubota NHL Top Prospects game earlier in the year. Tyson was awarded the Team White Player of the Game after finishing the night with 2 goals and 1 assist. Foerster jumped 20 points on the NHL Scouting Players to Watch list from 41st to 21st.

The Barrie Colts organization would like to congratulate Tyson Foerster who was selected in the first round, 23rd overall to the Philadelphia Flyers.

“[I am] honoured to be selected by the Flyers and I don’t think I could have done it without you guys. It’s a dream come true; I know the Flyers are a really gritty team and I can’t wait to learn more about them. I just want to thank the coaches, my teammates, the trainers and especially the fans. You guys are the best and I miss you all” said Foerster, following the NHL draft.

The Colts were thrilled to acquire Aurora native, Evan Vierling from the Flint Firebirds back in January. As a strong centerman, Evan grew as a player during his few months with Barrie. After being drafted in the first round, 2nd overall in the 2018 OHL Priority Selection by Flint, Vierling scored 6 goals and had 27 points in his rookie season. During his sophomore sprint, Evan scored 2 goals and had 10 points in Flint, before being traded to Barrie. Vierling added an additional 12 goals and 34 points to finish his season with 14 goals and 30 assists in 43 games played. At the end of the 2019/2020 season, Evan Vierling was ranked 66th on the NHL Scouting Players to Watch list.

The Barrie Colts organization would like to congratulate Evan Vierling who was selected in the fifth round, 127th overall to the New York Rangers.

“We quickly learned how impactful Evan could be on our club after acquiring him from Flint. He is a tremendous person and a dynamic player on the ice. Clearly the … felt the same. We are very proud of this accomplishment for Evan and his family and we look forward to him being a huge part of our future here in Barrie” commented Howie Campbell.

“It’s an unbelievable feeling being drafted by the New York Rangers. I’ve worked so hard for this my whole life. I couldn’t be happier with the way things turned out. Look forward to getting back to work with my teammates in Barrie” said Evan Vierling after hearing the news.

The Barrie Colts organization would like to extend congratulations to our two recent NHL drafted players, Tyson Foerster and Evan Vierling and we are pleased to add their names to the long list of Barrie Colts players that have been drafted to the NHL during our 25 year history.