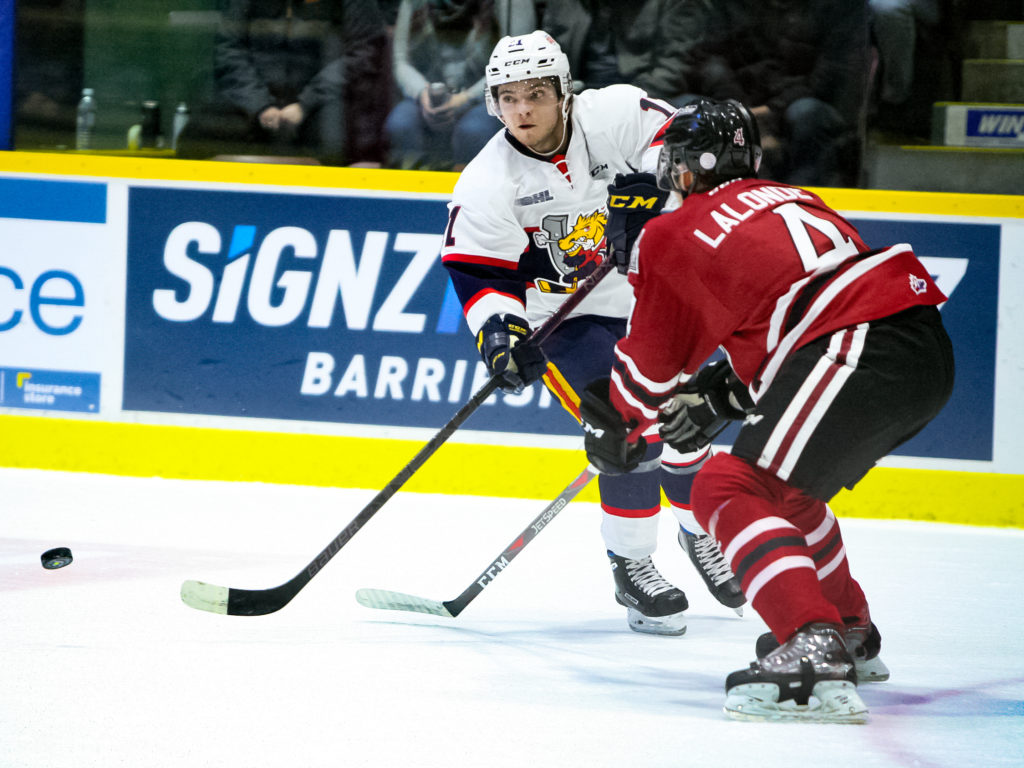 It was a tight action packed game for forty minutes, but the Barrie Colts would be the ones bringing the storm in the third period scoring six straight to bury Guelph in an 8-2 victory Saturday night at the Barrie Molson Centre.

Leading the way for the offense was Ben Hawerchuck earning the hat trick and the eventual game winner which began the third period onslaught. Newly acquired Jacob Tortora making his home debut would continue his goal streak adding his third in three games while also contributing two assists on the night and Lucas Chiodo would have a four point night adding a goal and three assists.

Both goalies would be peppered with shots as the Colts finished ahead 52-43. Kai Edmonds making 41 saves on the night would earn his 4th win of the season.

The Colts came into this one looking to finish off the three in three weekend strong after getting dominated the night before in a tough loss to central division rival Niagara.

Right at the midway point of the 1st Jason Willms would break the ice in this one. Keeping it in at the Storm’s blue line he’d rip a shot over the glove of Guelph starter Nico Daws for his 6th of the season.

That would be the only goal of the period as the Colts would hold the 1-0 lead after twenty minutes.

After a fairly quiet 1st, the action would surely pick up in the second and put both goalies to the test.

The boys would strike quick just 40 seconds into the 2nd.  Hawerchuck would get the pass from Justin Murray in the left circle, turning quick to snap his 12th past Daws. Willms would pickup the second assist on the play.

Just minutes later the Storm would get one back. With the boys down a man, Isaac Ratcliffe would deke through the defenders and slide one under Edmonds to make it 2-1.

The Storm would keep the attack coming. Breaking in on a 3 on 1 approaching the midway point, a shot would trickle through Edmonds, but Colts captain Murray would save the day as the puck was sliding over the goal line.

With plenty of scoring chances coming including a ring off the post by the Storm’s Alexey Toropchenko late in the frame, the Colts would still lead on the shot clock 34-29 and hold the lead in the game after forty.

Guelph would continue to press into the third and Zach Poirier would tie things at 2:36, but that would be it as the Colts assault would take off just two minutes later.

After Suzuki would ring another off the bar, Chiodo would pick it up in the right circle and lay a perfect pass for Hawerchuck to tap in his second of the night and 12th of the season. Matej Pekar would gather the secondary assist.

Just 29 seconds later, Suzuki would find Tortora with a wide open net to pot his 3rd in three nights to make it 4-2.

One minute later, the boys would chase the Storms defense back into their own end again and Aiden Brown stealing the puck below the goal line would feed Jaden Peca alone in front to one time his 6th of the campaign in.

The Colts would give Daws a break for a couple shifts but minutes later, Suzuki would pick the puck off the side boards firing a laser pass to Chiodo to deflect in. Right off the next draw they’d do it again. Tortora would toe drag the defender laying a pass to Tucker who deked around Daws and make it 7-2.

Finishing it off with the Colts on the powerplay Hawerchuck would seal the hat trick picking up the loose puck in the slot firing in his 14th of the season making the 8-2 final.

Barrie will return to action next Thursday night on home ice once again for a 7:30pm puck drop taking on the Mississauga Steelheads.