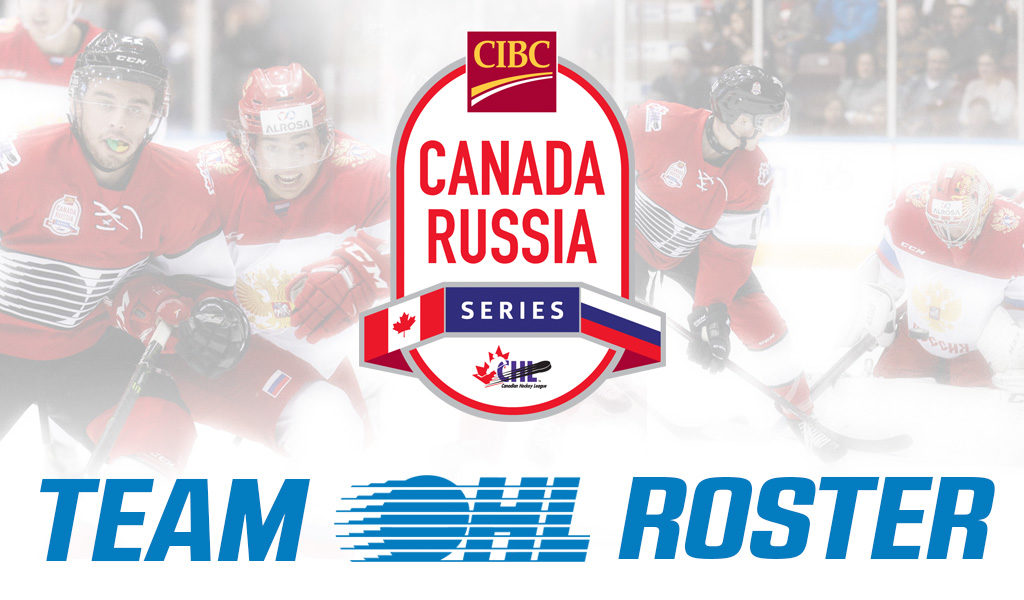 Team OHL will compete against the Russian National Junior Team in Game 3 of the six-game cross Canada series in Kitchener on Thursday November 7 and in Game 4 in London on Monday November 11. The series will begin with two games in the Quebec Major Junior Hockey League and will wrap up with two games played in the Western Hockey League.

A total of 25 players have been selected to represent the OHL in the 2019 CIBC Canada Russia Series including 15 players who will compete in both Ontario games. The rosters feature 20 players who have been selected in the NHL Draft including first round picks Ty Dellandrea (Dallas Stars, 13th in 2018) of the Flint Firebirds, Liam Foudy (Columbus Blue Jackets, 18th in 2018) of the London Knights, Thomas Harley (Dallas Stars, 18th in 2019) of the Mississauga Steelheads, Ryan Merkley (San Jose Sharks, 21st in 2018) of the London Knights, Philip Tomasino (Nashville Predators, 24th in 2019) of the Niagara IceDogs, Connor McMichael (Washington Capitals, 25th in 2019) of the London Knights and Ryan Suzuki (Carolina Hurricanes, 28th in 2019) of the Barrie Colts. Four players who are first time eligible for the NHL Draft in 2020 have also been named to the roster including forwards Quinton Byfield of the Sudbury Wolves and Cole Perfetti of the Saginaw Spirit along with defencemen Jamie Drysdale of the Erie Otters and Ryan O’Rourke of the Soo Greyhounds.

Kitchener Rangers teammates Jacob Ingham, a sixth-round pick of the Los Angeles Kings in 2018 and Riley Damiani, a fifth-round pick of the Dallas Stars in 2018, will have a chance to compete before a home crowd at The Aud on November 7. The London Knights quartet of NHL prospects Foudy (Columbus Blue Jackets), McMichael (Washington Capitals), Merkley (San Jose Sharks) and goaltender Jordan Kooy (Vegas Golden Knights) will suit up before a London crowd on November 11.

In 16 years of competition against the Russian National Junior Team, the OHL has played to a record of 25-6-1 following a 3-1 win in Sarnia and a 4-0 loss in Oshawa last season.

*- denotes players competing in one game only

*- denotes players competing in one game only

The 2019 CIBC Canada Russia series is proudly supported by title partner CIBC, and associate sponsors Kia Canada, Cooper Tires, and Kubota Canada.  All games will be broadcast nationally on Sportsnet and TVA Sports.

For event information including how to purchase tickets please visit http://chlcanadarussia.ca.