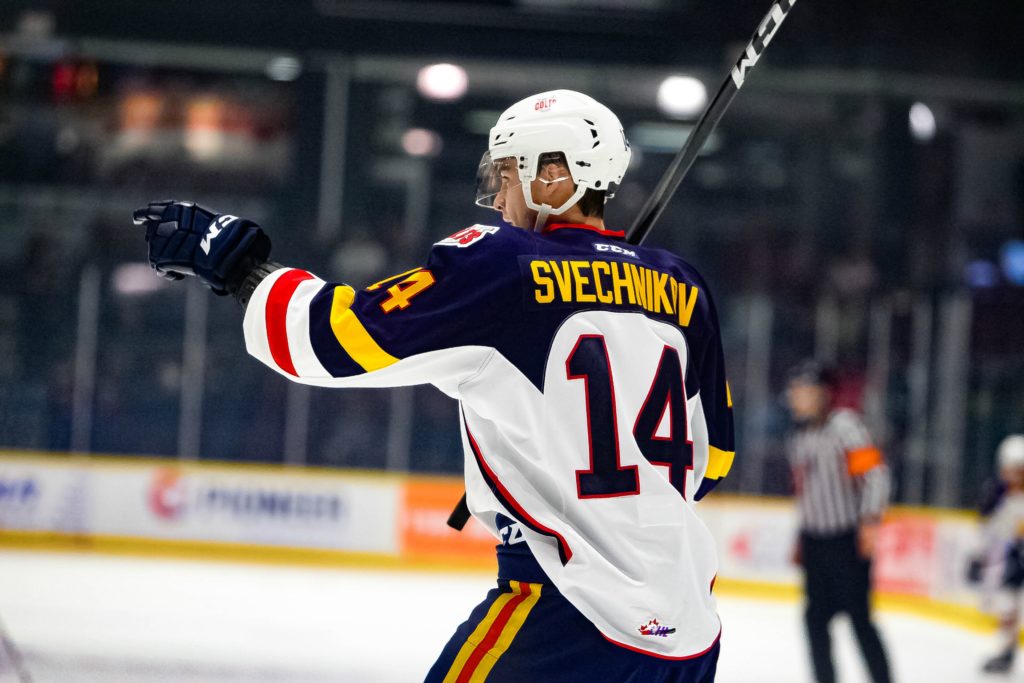 Andrei Svechnikov would score the game winner including a hat-trick and newcomer Aaron Luchuk would have a three point night with a goal and 2 assists leading the Barrie Colts to a 6-4 victory over the Owen Sound Attack.

The Barrie Colts were back in action at home Thursday night kicking off a three in three weekend set in the first of six matchups on the season with the Owen Sound Attack.

The addition of Luchuk would provide an immediate offensive boost to the Colts lineup coming into tonight’s game 2nd overall among point’s leaders in the Ontario Hockey League.

The Attack dominated a rebuilding Colts team last season in the Hwy. 26 rivalry winning all 6 games. The boys would come out strong looking to start their own streak in the battle between the two teams.

Nearing the midway point of the first period Barrie would get things started. Alexei Lipanov would slide a pass back to Colts captain Justin Murray, he’d snipe a seeing eye shot finding its way through a maze of players to the top right corner of the net to give Barrie the opening lead of the game.

Moments later the Colts would jump a five minute powerplay and just 36 seconds into it would increase their lead to two.

With the puck finding its way to front of the Owen Sound goal, Attack starting netminder Mack Guzda would fail to cover the loose puck leaving Svechnikov to bury his 12th goal of the season. Jason Willms and Luchuk would gather assists on the play.

Barrie would outshoot the Attack 16-7 in the opening twenty minutes of play and take a 2-0 lead in to the middle frame.

Going into the second frame Owen Sound would come out of the room looking to get things evened up.

At 7:15, Chase Campbell would come streaking into the Barrie zone snapping a low shot to get the Attack on the board.

Just two minutes later the Bears would even things up. While on the powerplay Jacob Friend would send hard low shot from the point to beating Barrie starter Leo Lazarev to tie the game at 2 apiece.

The Colts would answer right back with one of their own. At 10:54, Joey Keane would carry the puck deep into the Attack zone before backhanding a pass right on the tape of Luchuk to one time his 29th goal of the season. Lipanov would be credited with his 2nd assist on the night.

Once again it would be a span of two minutes, and with Owen Sound right back on the powerplay the Attack would reply quickly. Aidan Dudas would snap a shot from the left circle, Lazarev would make the initial pad save but Ethan Szypula would bury the rebound to knot the game at 3.

In the third, Owen Sound would continue their momentum where again they would capitalize on a Barrie penalty.

Just four minutes into the final frame Sean Durzi would send a cross-ice pass finding Dudas to one time a blast off the pad of Lazarev into the Barrie net to gain their first lead of the game.

At 9:30, the Colts would strike right back. After a turnover behind the Attack net the puck would come straight out front of Guzda. Ben Hawerchuck would get a couple of wacks at it, before Lucas Chiodo would rip it into the open cage for his 11th goal of the season to make it 4-4.

The Colts would keep the pressure coming and the pair of Russians would connect once again. Lipanov would skate across the top of the circles in the Attack zone firing a low shot, Guzda would make the initial save but Svechnikov would be right there at the side of the net to bang in his 2nd of the game to put the Colts back in front. Keane would also gain his second assist of the game.

Owen Sound would pull the goalie late in the third looking for the equalizer, but it would be Svechnikov finding himself all alone to seal the victory and pot his third goal of the game and 14th on the season.

The Colts will look to continue the momentum through the weekend as they hit the road south. First up, Friday night a date with the Erie Otters and into Saturday night versus the Niagara Icedogs.