Storm Hit the Colts Hard in a 6-2 Defeat 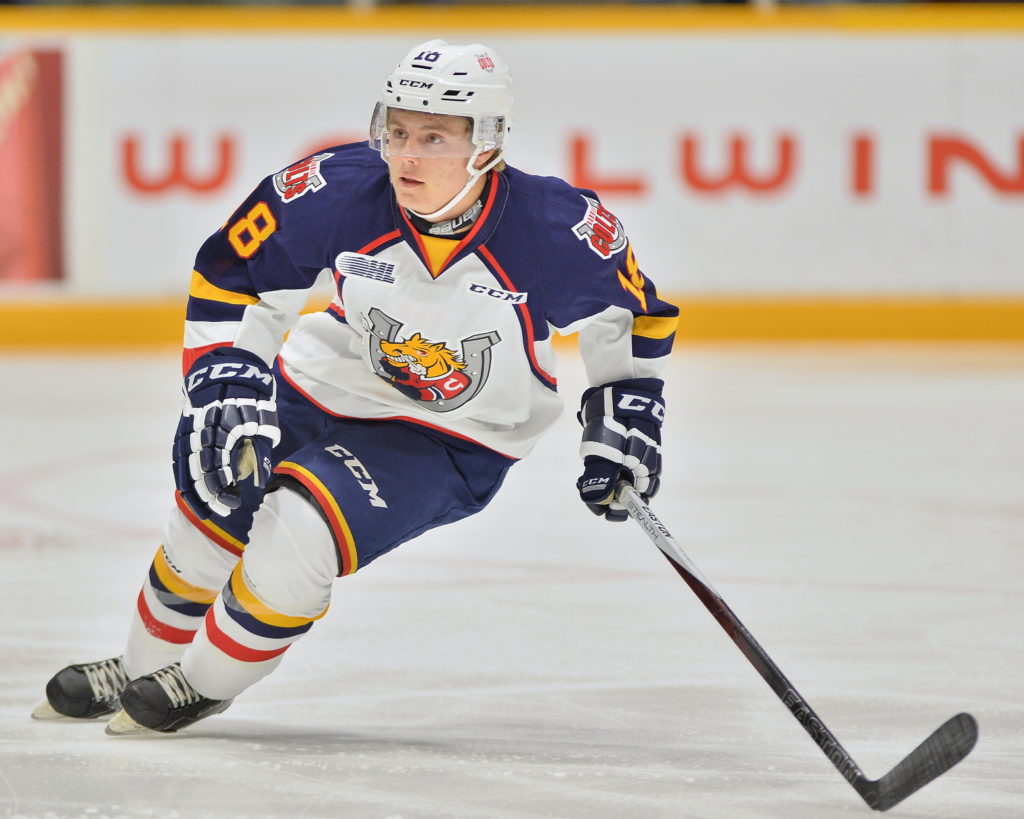 Guelph’s two first period goals pushed them out to a lead they would never give up in a 6-2 victory over the Colts on Friday night.

It was a battle of the last two teams in the OHL standings on Friday night in Guelph. With the playoffs slowing slipping away from both teams, this was a game they both needed to have.

The scoring would get started very early in this game. Just past the four minute mark it was the home team striking first. The OHL’s number one pick from this past years draft Ryan Merkley snapped a shot on goal that bounced off the blocker of Christian Propp (who was making his 24th appearance this season) and off of Nick Deakin-Poot for his 4th goal of the season. The goal would go to a review but would stand.

Less than two minutes later the Storm would keep coming. This time after a Lucas Chiodo breakaway, where he couldn’t beat Liam Herbst who got the start for Guelph, they turned the puck the other way and Barret Kirwin finished it off for his 4th goal of the season, snapping it glove side on Propp.

With just over a minute remaining in the opening period it looked like the Storm were going to extend their lead as Albert Michnac danced his was past a couple of Colt defenders before being stopped on the doorstep by Propp ending the first with a 2-0 Guelph lead.

About a minute and a half into the second period Guelph kept the pressure on. Luke Moncada was set up all alone in front of the Barrie net, but once again it was Propp making the stop, keeping the score where it was.

At almost the seven minute mark Zach Magwood absolutely buried one over the shoulder of Herbst to get Barrie on the board. The goal was his 14th of the season. Guelph, ON native Giordano Finoro drew the lone assist.

A little later on the Storm would get back the momentum by pinning the Colts in their own zone for a long period of time. During that stretch Michnac would get the best chance to restore the two-goal lead but twice the right pad of Propp stopped him. Those chances did lead to a Guelph powerplay, and eventually a five on three advantage that Barrie’s penalty-kill was able to handle with great goaltending and defensive play.

Moments into the third period Barrie would have a great chance to tie it but were stopped. Chiodo would find the puck in the slot and slide it over to Ben Hawerchuk who couldn’t beat Herbst.

Down the other end it went and Guelph would draw a penalty. On that powerplay, just nine seconds in Merkley would snap home the insurance marker giving the Strom their two goal lead back.

Closing in on the midway mark of the third period Guelph would put this one away for good as Cedric Ralph would finish off a great passing play giving the Storm a 4-1 lead.

Barrie would strike with less than half a period to go as Anthony Stefano snapped home his team leading 18th goal of the season assisted by Hawerchuk to cut the lead in half.

Just eleven seconds after that Deakin-Poot would add another followed by Givani Smith a little while after, putting the cherry on this contest 6-2.

Barrie is back in action tomorrow night as they play host to the North Bay Battalion. Puck drops @ 7:30pm at the Barrie Molson Centre. Tickets still available at www.barriecolts.com