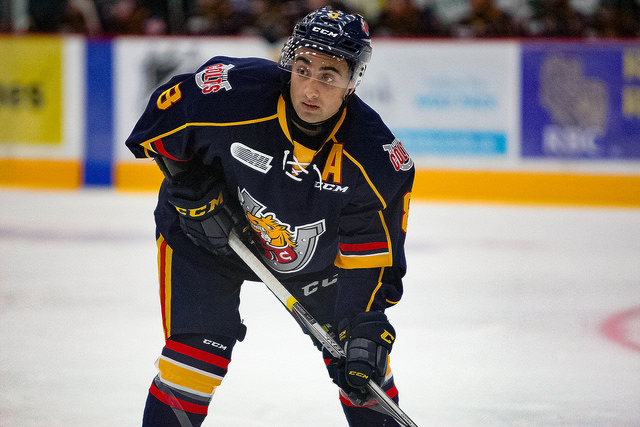 The Sarnia Stings strong penalty killing was the story in their 4-1 win over Barrie Friday night.

The boys made their first overnight road trip of the season following a big 3-1 victory over the Battalion on Thursday night. Sarnia was their first stop before heading to Saginaw on Saturday.

Things didn’t start the way the coach had scripted it. Just over a minute after puck drop it was Sarnia’s Adam Ruzicka putting one past Leo Lazarev who got the nod after a great performance a night ago.

The Sting would keep the pressure on as they dominated the first frame. After making 34 saves in the game last night Lazarev was busy once again. The overage goaltender was forced to come up with a handful of big saves to keep the score at 1-0 for Sarnia.

The home team would continue their pressure into the second period. Just a couple minutes into the second frame it was Jordan Ernst grabbing a big rebound off of a shot from the point and putting it into the wide open net to make it 2-0.

The rest of the period was full of penalties and saw very little five on five action. Most of the trips to the penalty box came from Sarnia, who took three straight, sending Barrie to a two man advantage for a lengthy amount of time. A night after going 0/9 on the powerplay, the Colts couldn’t get anything going once again.

At the other end Lazarev remained sharp despite allowing the early period goal to give Sarnia the 2-0 lead. He was keeping the team in the game holding the score at that heading into the intermission.

The third would continue on like the second, with more penalties and it remained the same with Sarnia leading the charge to the box.

Once again though, Barrie could not capitalize and get any momentum. Instead it was Sarnia striking shortly after an expired penalty. Sting defender Theo Calvis threw the puck towards the Barrie goal and it redirected off of a leg and past Lazarev to extend their lead to 3-0.

Barrie’s fourth line would go to work creating a quality chance in front looking to open the scoring but were denied. It was Sam Rhodes stripping the defender of the puck and finding Kyle Heitzner all alone in front but it was Justin Fazio coming up with his best save of the game, keeping Barrie off the board.

It did spark a bit of a charge for the Colts. Just minutes later some great puck movement set up Barrie’s opening goal of the game. A good cylcle play by Ryan Suzuki moved the puck down low for Alexey Lipanov who fed the blind pass out front to a wide open Zach Magwood who made no mistake cutting the lead to 3-1.

A penalty shortly after really put a stake in any sort of a comeback for the boys in blue as the Stings Ruzicka added his second of the game to put them back in front 4-1.

Barrie finished the game 0/8 on the powerplay as they continued their struggles and have gone a combined 0/17 in their past two contests.

They are back in action tomorrow night in Saginaw as they try to make this a winning weekend. Puck drops at 7:05. Barrie will be back at home next Thursday as we play host to the Erie Otters. Tickets available on www.barriecolts.com