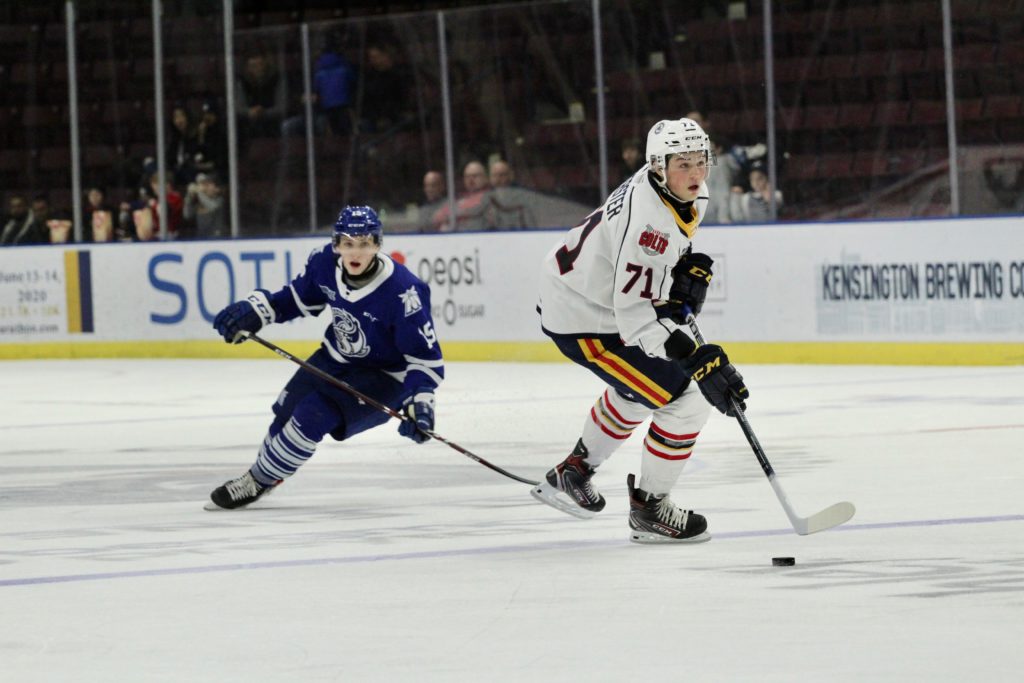 It was another slow start for the Barrie Colts who fell behind early and were unable to recover against a Mississauga team looking to stay competitive in the Central Division.

Even with the shots 11-11 in the first period, the Steelheads were able to capitalize on two of their chances, the first one coming off a break when Aidan Prueter sniped goal number 12 of the season, on a play that saw the puck just squeeze through goaltender Jet Greaves.

A late 2 on 1 break by the Steelheads saw Keean Washkurak feed a nice pass over to James Hardie who made no mistake shooting blocker side on Greaves doubling their lead to two.

The Colts finally get through Edmonds in the second period immediately following the powerplay, a quick strike on the rush from Anthony Tabak who received a swift pass from Ethan Cardwell gets the Colts on the board. It was Tabak’s tenth goal of the season.

The momentum would not last for the Colts after Tyson Forester took a tripping penalty. The Steelheads take full advantage of the powerplay as Cole Schwindt skated down the right side and fired a shot through Greaves.

Not even a minute later Martin beats Greaves with a shot short-side high, increasing Mississauga’s lead to 3.

Steelheads forward Washkurak got in on the fun taking a pass from Schwindt in the slot and making no mistake, burying his 19th of the season making it 5-1 at 16:20 of the second period.

Mississauga was not finished as a couple of unlucky bounces around Greaves gave William Portokalis credit for his ninth of the season.

The Colts would make a goaltender change to begin the third period marking the end of Greaves night.  He finished with 17 saves on 23 shots and was replaced with Arturs Silovs.

Even with a fresh goalie on the ice the puck seemed to favour the Steelheads as it skipped over multiple Colt sticks and ended up on Richard Whittaker’s who took no time to release a shot past Silovs 1:22 into the third period to make it a 7-1 game.

Whittaker was not done yet as 10:38 into the third period he drives the net and feeds Martin for his second of the night and that score would stay the same as the Colts drop Sundays contest 8-1.

Although the Colts are without their Captain Luke Bignell due to an upper body injury after Thursday’s game against Saginaw, they had a spirited contest Saturday against the Windsor Spitfires gaining 2 points. Unfortunately, the Steelheads capitalized on every opportunity given to them and took home the two points to close up this week’s games.

The Colts will look to rebound Thursday as the Niagara Icedogs come to town and the Colts continue to stay neck in neck with the Sudbury Wolves at the top of the division.

Tickets for that game can be purchased here.