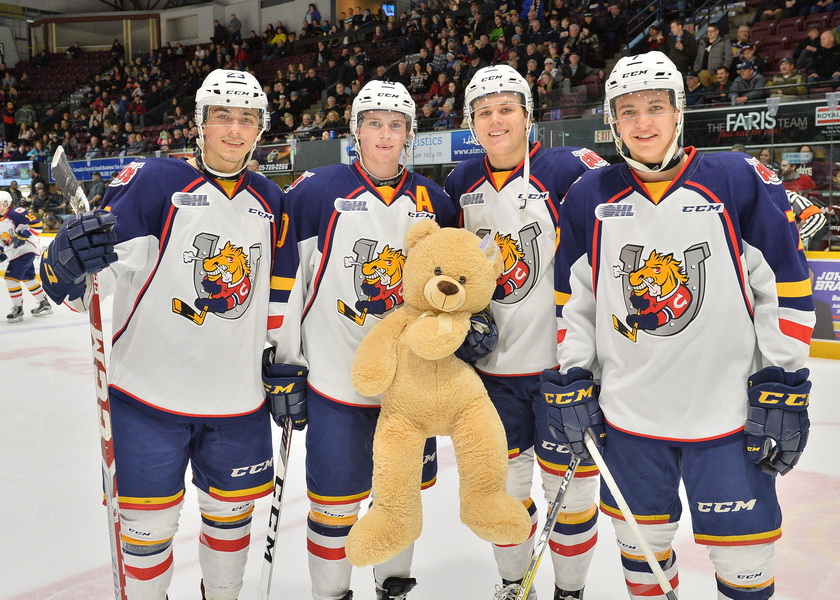 Thursday night was Teddy Bear toss night at the Barrie Molson Centre but that was the only thing the Colts could celebrate on this night as they dropped a tough one to Windsor 3-0.

The first period didn’t have much to talk about. More of a feeling out period for the first few minutes. You could feel the tension in the building to toss the Teddy Bears for Colts fans as Barrie had lots of pressure, but just couldn’t score.

Both teams had power-plays but the back of the net remained empty and the ice remained Teddy-less.

The second period started off a lot like the first, with no scoring. Both teams traded power-plays but no one could find the back of the net.

Both Christian Propp and Michael DiPietro were the stars of the game on this night keeping their teams in the game.

It wasn’t until the 15:42 mark of the second period where Windsor opened the scoring. Graham Knott took advantage of a turnover at the Barrie blue-line and had a breakaway on Propp but wasn’t able to beat him. He stayed with the puck and had the Colts goaltender out of position and put the puck home into the gaping cage.

Barrie fans were anxiously awaiting that first goal to release the Teddy Bears but they had to wait a bit longer as they remained off the scoreboard through 40 minutes of play.

In the third it was the Spitfires striking again as Tyler Nother netted his first of the season on a shot from the top of the circle.

The Teddy bears eventually came flying midway through the 3rd period but not because a Barrie Colts goal. It was a great night off the ice for Monte Carlo Inn raising money for the Darling Home Foundation but not so much on the ice for Barrie.

Knott would add one late to put a cherry on top for the 2017 Memorial Cup hosts as they shutout Barrie on home ice.

The Spitfires took both meetings this season against Barrie.

The Colts are back in action on Saturday as they play host to the Flint Firebirds. Puck drop will be 7:30pm at the Barrie Molson Centre. Tickets going fast, pick them up now!