Sarnia’s Win Streak Continues as Colts Fall to the Sting 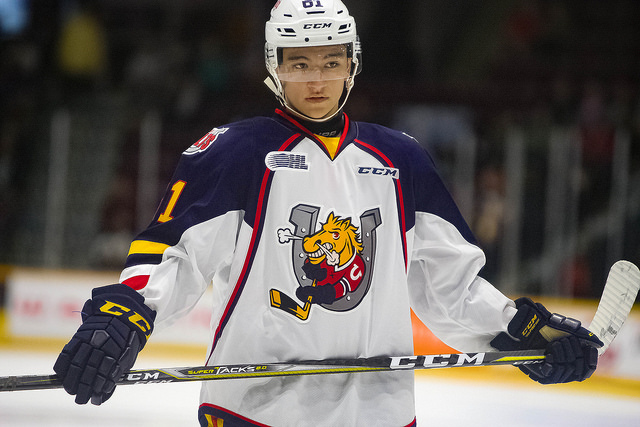 The Barrie Colts would outshoot their opponent Saturday night, but the Sarnia Sting would convert on their opportunities increasing their winning streak to 11 games defeating the Colts 7-2 Saturday night at the Molson Centre.

The Colts who received an honourable mention this week in the CHL’s Top 10 rankings would face a tall task up against the #2 ranked Sarnia Sting. Earlier in the week the Colts learned they would be without NHL Draft prospect Andrei Svechnikov for 6-8 weeks with a hand injury. Although a tough loss, the Colts depth this season is reason for optimism and will mean more opportunities for the rest of the team to take another step forward.

Sarnia would put the pressure on early. After a defensive miscue in the Sting end, Jordan Kyrou would skate the puck into the Barrie zone. After making one move evading the Barrie defenders he’d slide a pass to Drake Rymsha who quickly snapped a low shot deflecting off the skate of Sting forward Jamieson Rees and into the net.

The Colts would manage to kill off three straight penalty kills before the Sting would capitalize once again. With just over 5 minutes remaining in the first, Rees would find Rymsha alone in the slot beating Leo Lazarev to put the Sting ahead by 2.

The Colts would come out strong in the second firing shots from every angle trying to beat Sarnia starting goalie Justin Fazio but he proved to stand tall throughout the contest finishing with 37 saves.

Approaching the midway point of the second the Sting would convert again. While shorthanded Franco Sproviero would steal the puck behind the Barrie goal and setup Ryan McGregor alone in front increasing the lead to 3.

The Colts would continue to have trouble staying out of the box. With just over five minutes remaining in the second with the Sting on a 5 on 3 advantage Adam Ruzicka would finish off the passing at the side of the net to make it 4-0 for Sarnia.

Finally with 14 seconds remaining in the second and on their 23rd shot of the game, the Colts would bring the home crowd to their feet.

After winning the battle down low Curtis Douglas would thread the needle through defenders to find Jaden Peca in the right circle, blasting one by Fazio for his 1st goal of the season. Joey Keane would grab the secondary assist on the goal to make it 4-1.

Sarnia’s offense would continue the attack early in the final frame. Colton Kammerer and Cameron Hough would add two more tallies minutes apart to make it 6-1 for the Sting.

After stickhandling through a maze of players in front of the Sting net, Alexei Lipanov would eventually get the puck back after a combination of tip passes from Ryan Suzuki and Zach Magwood banging the puck past Fazio for his 4th of the season to make it 6-2.

That would be it for the Colts as Sproviero would add one more for the Sting late in the period.

The Colts will be right back in action tomorrow night as they travel to Oshawa for a 6:05pm puck drop with the Generals.