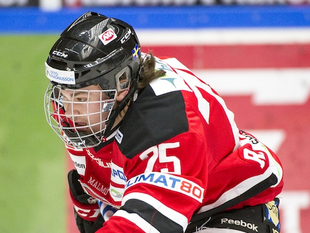 Most recently Andersson was named to the 2014-15 NHL CSS Futures International list as identified by NHL central scouting, which was released earlier last month.

“Andersson will enter the OHL as a rookie but already brings a wealth of experience; having played against men the past two seasons in Sweden,” said General Manager Jason Ford.

“He is a well-rounded defenceman that will help stabilize the back-end, and enters the OHL trying to pursue his dream of being an NHL player. We are very excited about this addition to our lineup,” added Ford.

The 17-year old Swedish defenceman played for the Malmo Redhawks last season where he collected 3 goals, 10 assists for 13 points in 43 games played. Andersson was fourth in team scoring amongst defenceman and was the youngest player on the roster.