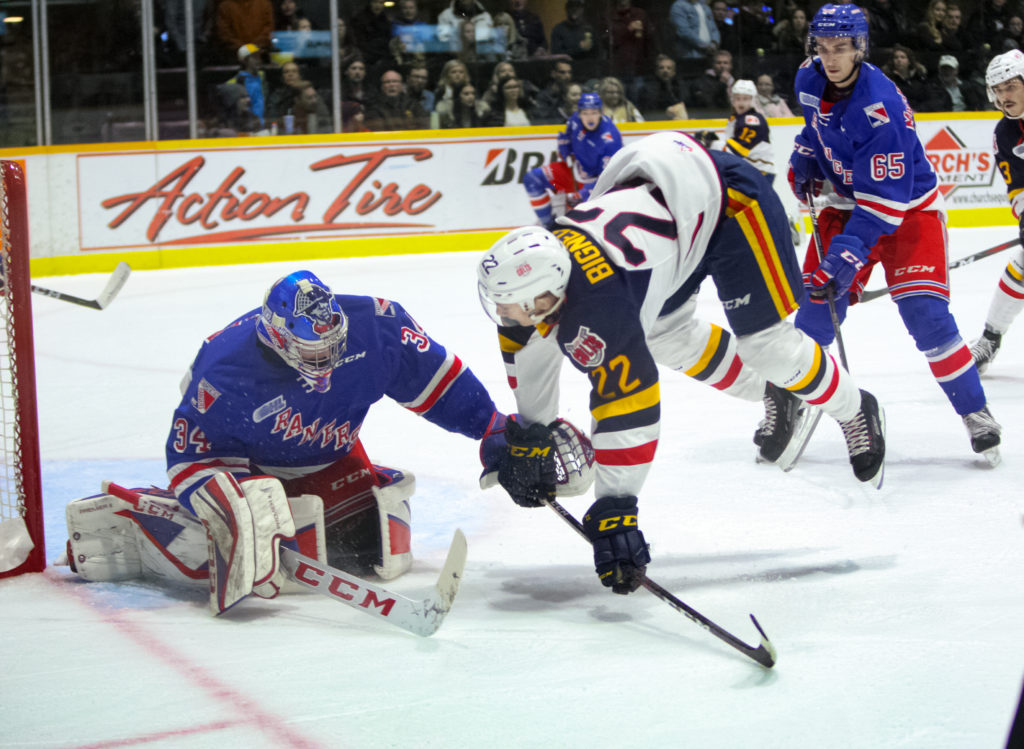 With just over twenty-five seconds left in the game Jonathan Yantsis buried the game winner on a breakaway for the 5-4 Kitchener Rangers win Saturday night.

The Colts were looking for the weekly sweep as they welcomed the Rangers to town for the only time this season.

When you’re winning, the bounces seem to go your way and they did early in the first period of this one.  Tyler Tucker dumped the puck into the Kitchener zone and it bounced off the glass and between the legs of Luke Richardson to open the scoring.  Justin Murray and Victor Hadfield assisted on the play.  It was Hadfield first career OHL point.

A little later in the period the Rangers would get the bounce on the man advantage.  A point shot went off the end glass and right on the stick of Jonathan Yantsis who put it into an empty cage.

Before the period would end, Barrie retook the lead.  An unlikely hero put the up by one.  Mathew Hill stepped into the slot and snapped home his 1st goal of the season.  Tyson Foerster and Luke Bignell picked up the assists.

In the second period it was all Rangers.  They added two more powerplay goals to take the lead 3-2 before adding their 4th of the game holding a two goal lead heading into the final period.

Barrie would cut the lead to one early in the third as Jaden Peca redirected a centering pass by Chiodo to cut into the lead.  Tucker was credited with the other assist.

With just over five minutes to go, they would tie things.  A great cross ice pass from Bignell setup Aidan Brown for the tip in to tie the game at four.  The goal was his 3rd of the season.  Nathan Allensen was also credited with an assist.

It looked like the game was going to go to overtime but with just over twenty-five seconds left in the game Yantsis sped away on a breakaway and gave the Rangers the 5-4 win.

Barrie is back in action next Thursday night as they hit the road to take on the Erie Otters.  Their next home game is next Saturday against the Guelph Storm where the team will unveil their third jerseys for the first time this year.